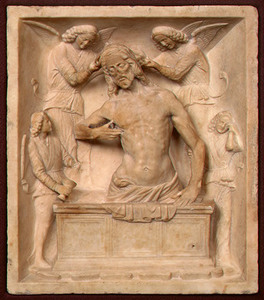 NOVEMBER 2
ALL SOULS DAY
Isaiah 25:6, 7-9
2 Corinthians 5:1, 6-10
Luke 23: 44-46, 52-53; 24:1-6a
Perpetual Light
The Church’s prayer for the dead has, for centuries, been crystallized in a single verse drawn from second chapter of the little known Fourth Book of Esdras. Even non-believers know at least the first word of the introit of the Mass of the Dead: Requiem aeternam dona eis, Domine: et lux perpetua luceat eis. “Eternal rest grant unto them, O Lord, and let perpetual light shine upon them” (cf. 4 Es 2:35). The word “requiem” has passed from sacred usage into the secular realm, becoming part of the vocabulary of poets and novelists, of dramatists and journalists.
The Requiem Mass has inspired some of the greatest music of Western civilization, beginning with the incomparable Gregorian Requiem and flowering into hundreds of other settings: Berlioz, Brahms, Britten, Duruflé, Fauré, Mozart, Verdi and, in our own day, John Rutter. Each year, during the month of November, I try to listen again to the various settings of the Requiem Mass, allowing their beauty to sink into my memory and, in some way, to nourish my prayer for the dead.
Fourth Esdras
The Fourth Book of Esdras is an attempt to sort out life’s huge questions: the goodness of God and the evil ever present in the world; the hope of immortality and the harsh reality of death; the meaning of suffering and faith in God’s mercy. It is a pity that, apart from the single verse taken up by the Liturgy of the Dead, most Catholics are unfamiliar with the Fourth Book of Esdras. The month of November is the perfect time to read it. You can find it in the RSV listed among the apocryphal books and in the supplement to the Vulgate.
A Vision of My Splendour
Esdras speaks to Israel in the name of God, saying, “Care for the injured and the weak, do not ridicule the lame, protect the maimed, and let the blind have a vision of my splendour. Protect the old and the young within your walls. When you find any who are dead, commit them to the grave and mark it, and I will give you the first place in my resurrection. Pause and be quiet, my people, because your rest will come” (2 Es 2:20-24). It is this promise of rest — refreshment, light, peace, and wholeness — that is echoed today, again and again, in the prayer of the Church for the dead.