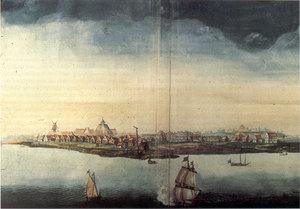 The painting depicts New Amsterdam (Manhattan) circa 1668.
David and Mary Ann went on pilgrimage last week to the Shrine of the North American Martyrs in Auriesville, New York, about three hours away from here. Auriesville is the site of the martyrdom of Saint René Goupil on September 29, 1642, of Saint Isaac Jogues on October 18, 1646, and of Saint John de La Lande on October 19, 1646. The New Haven Colony had been founded by John Davenport and Theophilus Eaton only eight years before, in the spring of 1638, two years after the ordination of Isaac Jogues to the priesthood.
Captured by the Mohawks in 1642, Isaac Jogues was forced to follow them to their winter hunting grounds, where he did the hard work of the squaws and slaves. After his labours, he wandered about the forest, chanting psalms or praying before the symbols he had carved into a tree: the Holy Name of Jesus and the sign of the Cross.
It was during this captivity that Saint Isaac wrote the following magnificent text. I thank David for having brought it to my attention.