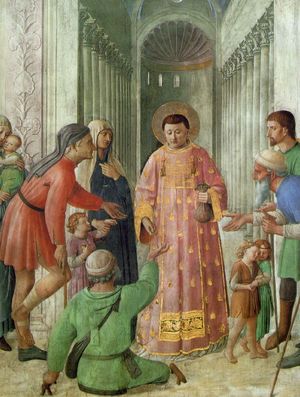 I preached this homily in 2007, and decided to post it again today.

Live With Christ and Laurence
I wish that today I could transport all of you to the Metropolitan Museum of Art in New York City just to see there the small round glass medallion dating from the fourth century that depicts Saint Laurence. The medallion bears the simple inscription: “Live with Christ and Laurence.” What some would see as a simple cultural artifact is for us a witness to the unchanging faith of the Church. The saints are those who have passed into eternal life with Christ. “Live with Christ and Laurence.” To live with Christ is to live in the society of the saints. Not only do we remember each year the anniversary of their birthday into the life of heaven; we seek their intercession and rely on it. We make our pilgrimage through this life in their company, having “over our head,” as the Letter to the Hebrews says, “so great a cloud of witnesses” (Heb 12:1).

A Saint Painting A Saint
I also wish that I could transport all of you to the Chapel of Pope Nicholas V in the Vatican to see there the series of frescoes that Blessed Fra Angelico painted to depict the life of Saint Laurence. This in itself is remarkable: a saint painting a saint.

Laurence and the Poor
In one scene of the series he shows Saint Laurence coming out of a basilica to meet the poor who are waiting for him. Laurence is youthful; he is dressed as a deacon for the liturgy. His dalmatic is deep rose in colour, suggesting joy, and trimmed in gold, hinting at the glory that is already transforming him. On the ground in front of him is a crippled man holding out his hand and begging for alms. To his right is an old man with a white beard, quite bent over, and leaning on his walking stick; he too is asking for alms. To Laurence’s left stands an impoverished widow in a dark dress and, just behind her, a young mother with a baby in her arms. Again to his left, is a man in need of medicine, pointing to a wound in his knee. On both sides of Laurence are little children; two of them, having already received their alms, are walking away, while a third is still waiting to receive something.

The Cheerful Giver
The fresco is a kind of homily on today’s First Reading and Responsorial Psalm. Laurence is the cheerful giver, beloved of God (cf. 2 Cor 9: 7). “He scatters abroad, he gives to the poor; his righteousness endures forever” (2 Cor 9:9, Ps 111:9). Blessed Fra Angelico painted theology: by showing the open basilica in the background, he is indicating that the Church is the servant of the hospitality of God, that her doors are open to all.

From Christ to Christ
By painting Saint Laurence in his dalmatic, he is suggesting that Laurence has just come from Mass where it is the deacon’s function to sing the dismissal, “Ite, missa est,” “Go forth, the Mass is ended,” or “Go, it is the sending forth.” The mission of the Church begins at the altar; leaving the altar, Laurence goes straight out the front door of the basilica to the poor who wait for him. He goes from Christ to Christ. 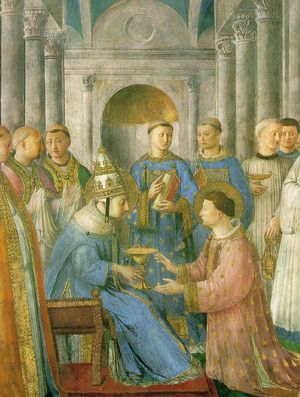 The Pope and His Deacon
In yet another fresco of the series, Fra Angelico shows Saint Laurence kneeling before Pope Saint Sixtus the Second whose feast we celebrated with the Blessing of Grapes on Tuesday. The scene takes places shortly before the martyrdom of Pope Sixtus together with four of his deacons on August 6, 458. Laurence’s death followed four days later. The bishop of Rome and his faithful deacon are looking at one another; both understand what is to come. They will both fall into the earth like grains of wheat (cf. Jn 12:24) to produce a harvest for Christ and for the Church.

The Chalice and Paten
The scene depicts Saint Laurence’s ordination to the holy diaconate. Saint Sixtus is handing over a chalice and paten to the new deacon. Laurence, clothed in his rose dalmatic, extends his hands to receive the sacred vessels; they are the sign of Christ’s sacrifice. It is as if the Pope is saying to his deacon, “Receive these sacred vessels and become what they are set apart to contain: the Body and Blood of Christ offered in sacrifice and given for the life of the world.”

The Drama of the Cross
All around Saints Sixtus and Laurence, Fra Angelico shows the clergy of Rome; they are grave and engaged in serious conversation. All seem to be aware of the drama that is about to unfold. Here again, Fra Angelico is preaching, not merely painting. He is showing that what is made present in the Eucharist — the sacrifice of the Cross — must unfold in all of life 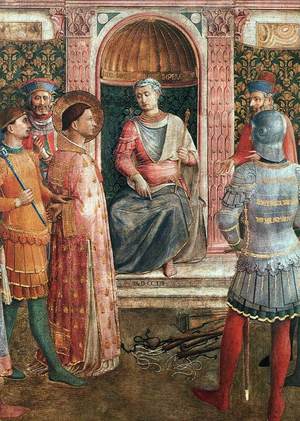 Laurence and Valerian
Finally, in a third fresco of the series, Fra Angelico shows Saint Laurence standing before the Roman Emperor Valerian. The Emperor is crowned and seated on his throne in an apse. The hands of Laurence are bound and he is surrounded by soldiers. A threatening array of whips lies ready on the ground before him. Laurence is dressed in the same rose-coloured dalmatic. He appears before the Emperor as a deacon of Christ, consecrated for the service of Christ’s altar and Christ’s poor.

His Face Like That of an Angel
Laurence looks at Valerian with a pure and steady gaze; he is not intimidated. He reminds us of that other deacon, Saint Stephen, of whom it is written that “all who sat in council saw that his face was like that of an angel” (Ac 6:15). The Emperor cannot look Laurence in the face; he lowers his eyes. The servant of Christ is possessed of a majesty that the world cannot give and the majesty of this world fades and shrinks before it. “If anyone serves me, the Father will honour him” (Jn 12:26).