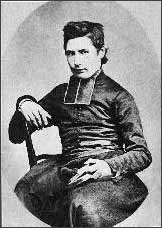 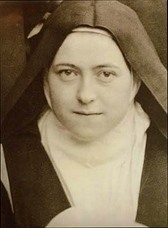 Saint Thérèse of the Child Jesus and of the Holy Face (1873–1897)
Saint Théophane Vénard (1829–1861)
It is true that the Lord chooses the little ones to confound the strong of this world. I do not rely on my own strengths, but on the strength of Him who, on the Cross, conquered the powers of hell.
(Saint Théophane Vénard quoted by Saint Thérèse)
Speaking to French pilgrims on the day after the canonization of the Martyrs of Vietnam, Pope John Paul II said, “Saint Thérèse of the Child Jesus was on intimate terms with Saint Théophane Vénard whose picture never left her as she suffered the pangs of death.”
Thérèse wrote, “I like Théophane Vénard even more than Saint Aloysius Gonzaga because the life of Saint Aloysius Gonzaga was extraordinary and Théophane Vénard’s was quite ordinary. . . . My soul is like his. He is the one who has best lived my way of spiritual childhood.” The young Carmelite pinned a picture of Théophane Vénard to her bed curtains, together with one of the Blessed Virgin and photos of her little siblings who had died.
Thérèse had read the young martyr’s biography and his correspondence. She composed a poem in his honour and, at the end of her life, expressed the deepest sentiments of her soul by copying out passages from Théophane’s letters. “Théophane is a little saint,” she wrote. “As a parting souvenir I have copied for you certain passages of the last letters he wrote to his parents; these are my thoughts. My soul resembles his.”
On 6 September 1867, twenty–four days before her death, Thérèse was presented with a relic of Théophane Vénard. She caressed it and asked to hold it close that she might kiss it. It was the life and death of Théophane that inspired Thérèse to say that after her death she would return to work on earth until the end of the world.