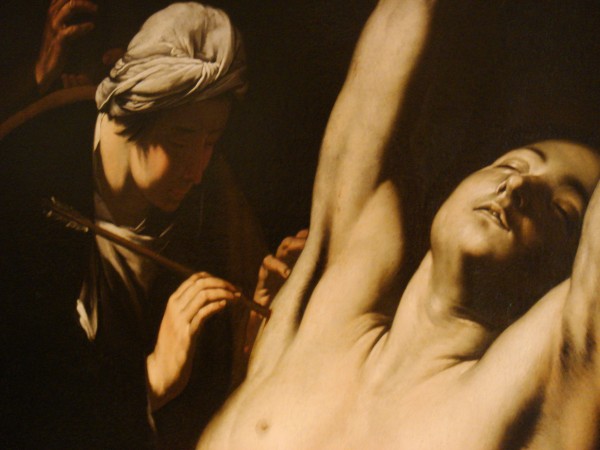 There are mortal sufferings from which human beings are not expected to recover. There are torturers of the soul who leave their victims for dead, certain that they will not recover their strength and revive. There are people who, having suffered the cruel assaults of evildoers, astonish those who know them, by going on to live and give witness to the love of Christ.

I am thinking today of the Christian soldier Saint Sebastian, condemned to death for comforting persecuted Christians; then bound to a tree, shot through with arrows, and left for dead. And I am thinking of Saint Irene of Rome, the wife of Saint Castulus, who sought out Saint Sebastian and washed his wounds, applying healing balms and medicines, until with strength renewed, Saint Sebastian appeared in the presence of Diocletian to bear witness to Christ.

I am thinking today of the small child who was sexually abused. Having had his innocence taken from him; having suffered a confusion of emotions too terrible for him to sort out; having lost all sense of security and safety; and locked into a silence born of fear, the odds are against such a child ever emerging from the shadows and fully living the life he was meant to live.

I am thinking today of the woman who, after having given herself to a man in marriage, finds that he is possessed of an uncontrollable rage. She suffers violence at the hands of the very man who pledged to cherish and protect her. The odds are against such a woman ever emerging from the shadows and recovering the ability to love again, and to trust.

I am thinking today of the man, the priest, who, after having pledged his life, his energies, and his all to the Church, the Body and the Bride of Christ, finds himself accused of a weakness, a sin, or a crime, and then, utterly forsaken, cast aside, and declared untouchable by those who profess to be in the service of the all-merciful Saviour. The odds are against such a priest ever emerging from the shadows and finding repentance, healing, and reconciliation in the heart of the Church.

But They Do Not Die

These are but three examples of innumerable the soul-killing aggressions from which the perpetrators walk away, leaving their victims for dead. But the victims do not die. They suffer. They bleed. Their wounds become infected and even putrid, but they do not die.

Somehow — often by the ministrations of one mortally wounded like themselves, but come back to life, life in abundance — such victims can and sometimes do recover and, in a certain sense, return from the dead. Someone stops to tend to their wounds, to disinfect them, and bind them up. “A certain Samaritan,” says the Lord, “being on his journey, came near him; and seeing him, was moved with compassion. And going up to him, bound up his wounds, pouring in oil and wine: and setting him upon his own beast, brought him to an inn, and took care of him. ” (Luke 10:33-34).

Saint Sebastian is an icon of souls left for dead, but brought back to life in order to give their witness to Christ. Saint Irene is an icon of those who minister to the mortally wounded, often risking their security and their reputation to do so. Today I ask the intercession of both saints, that those who are mortally wounded in their souls may emerge from the shadows to contemplate in the light the Face of Him who says, “I am come that they may have life, and may have it more abundantly” (John 10:10).