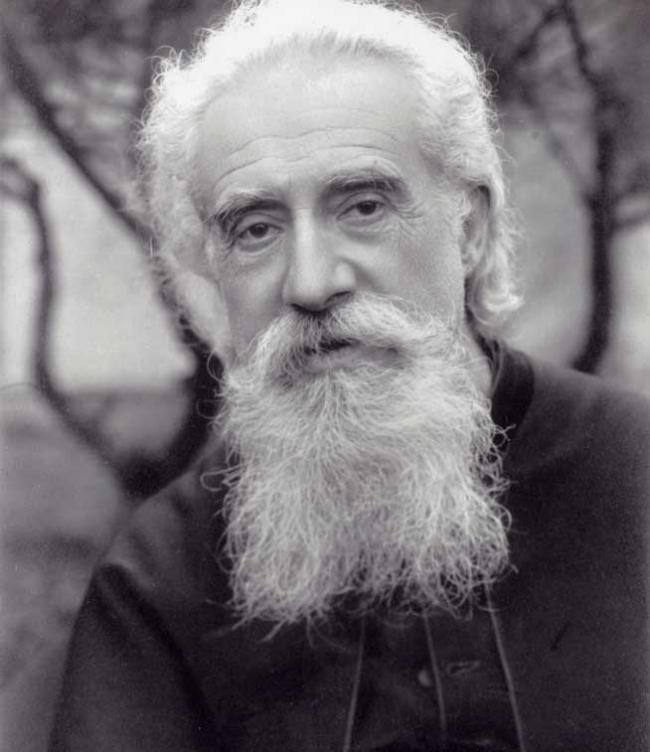 A Saint of Our Times
Beatified five years ago on 31 august 2013, Vladimir Ghika was born on December 25, 1873 in Constantinople, today’s Istanbul, Turkey.  He died on May 16, 1954 in Jilava, Bucharest in Romania. Blessed Vladimir was the grandson of the last ruler of Moldavia, Prince Gregory V. Ghika ( 1849 – 1856 ), son of John Ghika (major general, minister plenipotentiary) and Alexandrina Ghika. Born on Christmas Day of 1873 in Constantinople (Istanbul), he was baptised and chrismated in the Holy Orthodox Church. Blessed Vladimir’s father was, at that time, minister plenipotentiary in Turkey.

France
In 1878 the young Prince Ghika was sent to school in France at Toulouse, and left in the care of a Protestant family, attending their church because there was no Orthodox church nearby.  He graduated in 1895, after which he went to Paris to study at the Faculty of Political Science. At the same time, he attended classes in medicine, botany, art, literature, philosophy, history and law.

Rome
Blessed Vladimir returned to Romania due to poor health, and continued his studies there until 1898 when he went to Rome to attend the Angelicum, the Dominican Faculty of Philosophy and Theology. Prince Ghika desired to become a priest or monk, but Pope Pius XI advised him instead to dedicate himself to the lay apostolate as a member of the committeee for International Eucharistic Congresses, and in the diplomatic and humanitarian service of the Holy See. Blessed Vladimir’s charitable labours took him to  Bucharest, Rome, Paris, Congo, Tokyo (where he founded a Carmel), Sydney, Buenos Aires. Pope Pius XI would later call him “the great apostolic vagabond.”

Priest
Through his close association with the mystic Père Lamy, and with the remarkable circle of writers, artists, philosophers, and mystics who frequented the Benedictine monastery of the rue Monsieur, Prince Ghika was drawn to seek ordination to the priesthood.  He was living, at that time, with the Benedictine monks at rue de la Source.  On October 7, 1923 Prince Vladimir Ghika was ordained a priest of the Archdiocese of Paris by the Cardinal Archbishop,  Louis–Ernest Dubois.  Appointed to the Chapel for Foreigners in Paris, he exercised a most fruitful priestly ministry, serving in both the Latin and Byzantine rites until 1939.  Monsignor Ghika carried on his person a relic of the Crown of Thorns and, praying, applied it to the sick and troubled, obtaining numerous miraculous healings thereby.

The Brothers and Sisters of Saint John
In May 1926, Blessed Vladimir began the restoration of the Abbey of Auberive in the diocese of Langre with the disciples who had assembled around him, the “Brothers and Sisters of Saint John.”  The little community of Saint John had but one rule: Love.  Blessed Vladimir taught that one entered the community out of love, one remained in it out of love, and if one left it, that too was out of love.  In preparation for prolonged adoration of the Most Blessed Sacrament, the little community often meditated the account of the Burning Bush in the book of Exodus and the parable of the Vine and the Branches in Saint John’s Gospel.  Monsignor Ghika shared with the little community his intense devotion to the Beatitudes and, in particular, to the High Priestly Prayer of Our Lord in the 17th chapter of Saint John.  Frequently he recited with them a prayer inspired by Romans 8:  that he had composed.  In the light of the cruel martyrdom that he was to suffer later in a Communist prison, the prayer was prophetic.

Return to Romania
On August 3, 1939 Blessed Vladimir returned to his native Romania, where he shared in the sufferings inflicted on everyone by the Second World War.  He was close to Greek–Catholics and to Orthodox, to those of noble birth and to the humblest of his compatriots.  Already in Paris his reputation as a spiritual father was established; he continued to foster a fire of holiness in the souls entrusted to him.  Monsignor Ghika refused to leave Romania and chose to remain close to the poor and the sick in order to minister to them and bring them comfort.

Arrest, Torture, and Martyrdom
After the Communists came to power, especially after 1947, Blessed Vladimir Ghika continued to exercise his priestly ministry and to comfort the Greek–Catholic and Latin Churches whose bishops had been arrested and imprisoned. He was arrested on November 18, 1952, charged with “high treason” and imprisoned at Jilava where he was threatened, tortured and most cruelly beaten. A year later he was brought to court for trial. On 16 May 1954 the priest Prince Vladimir Ghika having known the direst sufferings and having been subjected to the most inhuman treatments, passed to the Father. Here is the Collect of the new Blessed.

Almighty and Everlasting God, Who didst give the Blessed Vladimir, priest and martyr, the strength to bear witness, even during times of persecution, to the living presence of Thy love; grant us the grace, by his example and his intercession, to remain unflinching in Thy service, in the communion of the Apostolic faith. Through our Lord Jesus Christ, Thy Son, Who with Thee liveth and reigneth, in the unity of the Holy Ghost, one God, world without end.  Amen.