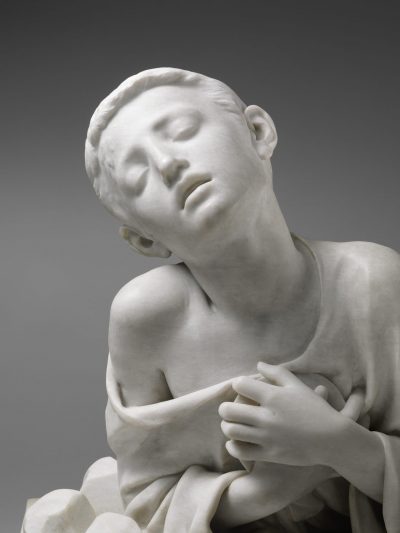 In our proper Benedictine calendar, today is the feast of Saint Tarcisius, martyr of the Most Holy Eucharist. Pope Benedict XVI spoke of Saint Tarcisius on the occasion of the great European pilgrimage for altar servers that took place on 4 August 2010.

Who was St Tarcisius? We do not have much information about him. We are dealing with the early centuries of the Church’s history or, to be more precise, with the third century. It is said that he was a boy who came regularly to the Catacombs of St Calixtus here in Rome and took his special Christian duties very seriously. He had great love for the Eucharist and various hints lead us to conclude that he was presumably an acolyte, that is, an altar server. Those were years in which the Emperor Valerian was harshly persecuting Christians who were forced to meet secretly in private houses or, at times, also in the Catacombs, to hear the word of God, to pray and to celebrate Holy Mass. Even the custom of taking the Eucharist to prisoners and the sick became increasingly dangerous. One day, when, as was his habit, the priest asked who was prepared to take the Eucharist to the other brothers and sisters who were waiting for it, young Tarcisius stood up and said: “send me!”. This boy seemed too young for such a demanding service! “My youth”, Tarcisius said, “will be the best shield for the Eucharist”. Convinced, the priest entrusted to him the precious Bread, saying: “Tarcisius, remember that a heavenly treasure has been entrusted to your weak hands. Avoid crowded streets and do not forget that holy things must never be thrown to dogs nor pearls to pigs. Will you guard the Sacred Mysteries faithfully and safely?”. “I would die”, Tarcisio answered with determination, “rather than let go of them”. As he went on his way he met some friends who approached him and asked him to join them. As pagans they became suspicious and insistent at his refusal and realized he was clasping something to his breast that he appeared to be protecting. They tried to prize it away from him, but in vain; the struggle became ever fiercer, especially when they realized that Tarcisius was a Christian; They kicked him, they threw stones at him, but he did not surrender. While Tarcisius was dying a Pretoria guard called Quadratus, who had also, secretly, become a Christian, carried him to the priest. Tarcisius was already dead when they arrived but was still clutching to his breast a small linen bag containing the Eucharist. He was buried straight away in the Catacombs of St Calixtus.

Pope Damasus had an inscription carved on St Tarcisius’ grave; it says that the boy died in 257. The Roman Martyrology fixed the date as 15 August and in the same Martyrology a beautiful oral tradition is also recorded. It claims that the Most Blessed Sacrament was not found on St Tarcisius’ body, either in his hands or his clothing. It explains that the consecrated Host which the little Martyr had defended with his life, had become flesh of his flesh thereby forming, together with his body, a single immaculate Host offered to God.

Dear altar servers, St Tarcisius’ testimony and this beautiful tradition teach us the deep love and great veneration that we must have for the Eucharist: it is a precious good, a treasure of incomparable value; it is the Bread of life, it is Jesus himself who becomes our nourishment, support and strength on our daily journey and on the open road that leads to eternal life; the Eucharist is the greatest gift that Jesus bequeathed to us.

I am addressing those of you who are present here and, through you, all the altar servers of the world! Serve Jesus present in the Eucharist generously. It is an important task that enables you to be particularly close to the Lord and to grow in true and profound friendship with him. Guard this friendship in your hearts jealously, like St Tarcisius, ready to commit yourselves, to fight and to give your lives so that Jesus may reach all peoples. May you too communicate to your peers the gift of this friendship with joy, with enthusiasm, without fear, so that they may feel that you know this Mystery, that is true and that you love it! Every time that you approach the altar, you have the good fortune to assist in God’s great loving gesture as he continues to want to give himself to each one of us, to be close to us, to help us, to give us strength to live in the right way. With consecration, as you know, that little piece of bread becomes Christ’s Body, that wine becomes Christ’s Blood. You are fortunate to be able to live this indescribable Mystery from close at hand! Do your task as altar servers with love, devotion and faithfulness; do not enter a church for the celebration with superficiality but rather, prepare yourselves inwardly for Holy Mass! Assisting your priests in service at the altar helps to make Jesus closer, so that people can understand, can realize better: he is here. You collaborate to make him more present in the world, in every day life, in the Church and everywhere. Dear friends! You lend Jesus your hands, your thoughts, your time. He will not fail to reward you, giving you true joy and enabling you to feel where the fullest happiness is. St Tarcisius has shown us that love can even bring us to give our life for an authentic good, for the true good, for the Lord. (General Audience, 4 August 2010)