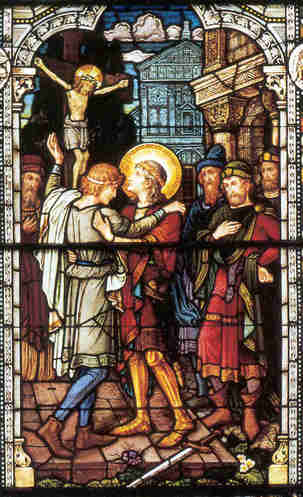 Good for Evil and Blessings for Curses
Good rendered for evil; blessings for curses; pardon, peace, concord, and reconciliation. A Collect for the Memorial of Saint John Gualbert speaks the language of the Gospel, ageless and ever new.

Almighty and ever-living God, source of peace and lover of concord, to know Thee is to live, to serve Thee is to reign; establish us in Thy love, that by the example of the blessed abbot John Gualbert, we may render good for evil and blessings for curses, and so obtain from Thee both pardon and peace.

Victory Over Vengeance
John Gualbert’s monastic vocation unfolded in dramatic circumstances. A medieval Florentine nobleman, he lived in an age and culture that, in spite of the Gospel, exalted vengeance as a matter of honour. When his elder brother was murdered, John felt compelled to avenge him. On a certain Good Friday, riding through a narrow mountain pass, just below the basilica of San Miniato al Monte in Florence, John came face to face with his brother’s killer. The man was alone. The place was isolated. There was no escape. John drew his sword, ready to exact a bloody vengeance. The murderer raised his arms in the form of a cross and, in the Name of Jesus Crucified, begged John’s forgiveness.

The Encounter With Jesus Crucified
Cut to the heart by the grace of the Cross, John dropped his sword, embraced his enemy, and made his way straight to a church in Florence. There, kneeling before the crucifix, John saw Jesus Crucified bow His head, acknowledging his act of forgiveness and, by the same token, forgiving him all his sins. And so, John became a monk of San Miniato al Monte. A splendid stained-glass window telescopes the story into one scene. John is shown as a young nobleman. With his eyes fixed on the image of the Crucified, he is embracing his enemy, the murderer of his brother. The iconography of Saint John Gualbert makes for a fascinating study. In nearly every image the saint is represented looking at Jesus Crucified, embracing Him, or holding the Cross against his heart.

Life in the Shady Valley
After a few years in Florence, John entered into conflict with the abbot of San Miniato, whom he accused of simony and of a falling away from monastic observance.  John Gualbert was obliged to leave San Miniato. A sympathetic Lady Abbess gave him land at Vallombrosa — the name means “Shady Valley” — where he established a new monastery. John never became a priest. The Benedictine observance of Vallombrosa was characterized by simplicity, poverty, and the care of the sick in the monastery hospice. In some ways, Saint John Gualbert prefigured Saint Francis of Assisi.

Peace in the Shadow of the Cross
What speaks to us in all of this, I think, is that John Gualbert’s monastic vocation began on Good Friday in a decisive encounter with Jesus Crucified. Saint John Gualbert points to the Cross as the source of all forgiveness and reconciliation, giving peace to those who dwell in the shadow of its branches. “They shall return,” says Hosea, “and dwell beneath my shadow, they shall flourish as a garden” (Hos 14:7). 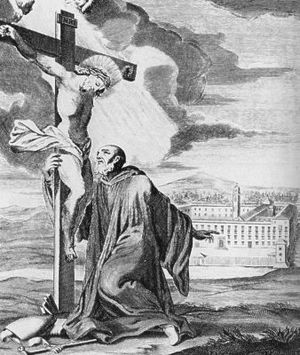 The reformed Benedictine lectionary offers proper readings today: Leviticus 19:1-2, 17-18; and Matthew 5:43-48. The lesson taken from Leviticus, speaks powerfully: “You shall not hate your brother in your heart, but you shall reason with your neighbour, lest you bear sin because of him. You shall not take vengeance or bear any grudge against the sons of your own people, but you shall love your neighbour as yourself: I am the Lord” (Lev 19:17-18). The Benedictus Antiphon proposed for today is another stroke of liturgical genius: “Save us, Lord, from our enemies, and from the hands of all who hate us, to guide our feet into the way of peace” (Lk 1:71, 79).

The Refusal to Look at the Other
It is a matter of simple psychological observation that when one is holding a grudge against another person, one avoids looking at the person’s face. Refusal of the face-to-face is a way of protecting oneself from the heart-to-heart. This is as true of our relations with one another as it is of our relations with Our Lord. It will be a terrible thing to hear Our Lord say in the hour of judgment: “I sought from you a look of kindness, a look of reverence, a look of acceptance and you refused to give it to me.” Then one will reply, “Lord, when did I refuse to look at Thee? When did I turn away from Thy Face? I looked at Thee in the Most Holy Eucharist. I contemplated Thine images. I sought Thy Face in the Scriptures.” And He will say, “So often as thou didst refuse thy gaze to one of the least of my brethren, thou didst refuse to look at Me.”

Show Me Your Face That I May Know Your Heart
Ask Saint John Gualbert today to obtain for us the grace to seek always the Face of Jesus Crucified: His Eucharistic Face, His Face hidden in the Scriptures, His Face depicted in holy images — yes — but also His Face in one another. One who refuses to meet the gaze of Our Lord will never come to know the secrets of His Sacred Heart. Quaerite faciem Domini semper. “Seek always the face of the Lord” (Ps 104:4b).