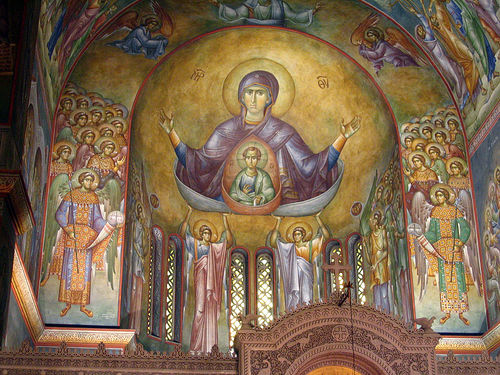 5 Jan. 6 May. 5 Sept.
Hence also the Lord saith in the Gospel: “He that heareth these words of Mine, and doeth them, is like a wise man who built his house upon a rock: the floods came, the winds blew, and beat upon that house, and it fell not, because it was founded upon a rock.” And the Lord in fulfilment of these His words is waiting daily for us to respond by our deeds to His holy admonitions. Therefore are the days of our life lengthened for the amendment of our evil ways, as saith the Apostle: “Knowest thou not that the patience of God is leading thee to repentance?” For the merciful Lord saith: “I will not the death of a sinner, but that he should be converted and live.”

Brother Chrysostom, you have listened well to what Our Lord says in the Gospel: “He that heareth these words of Mine, and doeth them, is like a wise man who built his house upon a rock: the floods came, the winds blew, and beat upon that house, and it fell not, because it was founded upon a rock” (Matthew 7:24). You have, from your earliest years, heard the words of Jesus. Your mother and father raised you to hear the Word of the Lord, to love it, and to obey it. It is a costly thing this choice for the Word of God. Not every man is prepared to make the choice and hold to it with constancy. Sometimes a long struggle ensues.

There is no man among us who has not, I think, at one time or another in his life, been tempted to turn his ear away from the Word of the Lord, in a foolish attempt to built his life on the sand of something else. Mercifully, God allows the floods to come, the winds to blow and to beat upon what the foolish man attempts to construct, dashing it to bits. Some repent after the first devastating experience. Others persist in their folly until, at length, God leaves them to themselves. This is what people in AA call “hitting bottom.” I call it the grace of salutary failure.

I am humbled to the dust by the patience of God. It is a wondrous and fearful thing: the mystery of God who waits for man, who gives man time, who permits him to make mistakes, and who allows man to fall only to show him mercy by raising him up again. Most men in coming to the monastery have already some experience of the grace of salutary failure. Not every man  is brought to this in the same way. In the lives of some, Our Lord permits spectacular falls in order to work even more spectacular spiritual resurrections. Ubi autem abundavit delictum, superabundavit gratia, “And where sin abounded, grace did more abound” (Romans 5:20). In the lives of others, the falls are hardly dramatic, but they are no less occasions of spiritual resurrection for the man who humbles himself and repeats the prayer of the publican: “O God, be merciful to me a sinner” (Luke 18:13).

Saint Benedict gives us a great certitude today: God does not will the death of a sinner; what God wills is that a man should be converted and live. To this end God gives grace to the man who cries out to Him, even if a man’s prayer originates in the abyss of an indescribable moral misery. It is good to repeat to oneself in hours of humiliating failure and repeated defeat: “God wills that I should be converted and live.” Saint Paul puts it this way: Hæc est enim voluntas Dei, sanctificatio vestra, “For this is the will of God, your sanctification” (1 Thessalonians 4:3).

There is, even among some pious Catholics, a persistent, niggling strain of Calvinism that whispers, “For this is the will of God, your damnation.” Such souls give their allegiance to a caricature of God: a punctilious God who waits to catch a man in some failure so as to be able to strike him from the list of the elect. God, in His infinite mercy, raises up saints in every age to show the perversity of such a belief. The last century was made luminous and fragrant with a number of such saints: Saint Thérèse, of course; but also the Dominican Blessed Jean–Joseph Lataste, the Apostle of Prisons, and many others. Saints such as these never denied nor minimized the horror of sin, they saw sin for what it is, and wept bitter tears over it. At the same time, they believed in the power and splendour of divine grace, asked for it confidently, and submitted to it, allowing it to change in them all that, of themselves and by themselves, they were incapable of changing, and to repair in them all that they were incapable of repairing.

Perhaps the single most dangerous heresy today is not what we think it is. It may well be that, the single most dangerous heresy today is the practical denial of grace. Man cannot move himself towards God, nor turn away from evil, nor elect to do good, nor persevere in doing good actions without the divine motion that we call actual grace. Without grace, no one of us can produce the smallest good and holy act, much less attain perfection. There are some, even in cloisters, who live in practical denial of Our Lord’s words on the night before He suffered: “Without Me you can do nothing” (John 15:5). Saint Paul spells it out for us: “It is God who worketh in you both to will and to accomplish” (Philippians 3:13). God’s prevenient grace disposes us to receive a chain of actual graces. When we cooperate with actual grace, we exercise our liberty, and even this exercise of our liberty is itself an effect of grace.

This is why we monks give ourselves over to praying always. We pray because we know that we need grace. Dicebat autem et parabolam ad illos, quoniam oportet semper orare et non deficere, “And he spoke also a parable to them, that we ought always to pray, and not to faint” (Luke 18:1). We pray because we know that prayer obtains grace, and this not only for ourselves, but also for those members of the Church who stand most in need of grace, without being capable of asking it for themselves: the dying, people caught in webs of vice; the utterly despondent; souls languishing in a terrible weariness. The man who begins to pray is already moved by grace; it is this prevenient grace that makes a man capable of praying for grace.

I hold, with those Fathers and Doctors who teach that the Blessed Virgin Mary is the Mediatrix of All Graces, that every prevenient grace is given through Mary and, in a certain sense, because Mary has asked for it. In 2007, preaching in Brazil at the canonization of Blessed Anthony of Saint Anne Galvão, Pope Benedict pronounced these unequivocal words: “There is no fruit of grace in the history of salvation that does not have as its necessary instrument the mediation of Our Lady.” Prayer is the normal, efficacious, and universal means by which God wills that we should obtain grace in time of need, and all prayer begins, mysteriously but really with the prayer of the Blessed Virgin Mary, Omnipotens Supplex.

The Council of Trent in the Decree on Justification quotes the Doctor of Grace, Saint Augustine: “God never commands the impossible, but in commanding He tells us to do what we can, to ask for that which we are not able to do, and He helps us in order that we may be able” (Denzinger 804). In God’s mysterious and inscrutable plan, certain graces may be obtained only by prayer. Nonetheless, the actual grace by which a man begins to pray will never be denied him. “The Spirit also helpeth our infirmity. For we know not what we should pray for as we ought; but the Spirit himself asketh for us with unspeakable groanings” (Romans 8:26).

There are two errors abroad in the Church at present. Both were confuted by the Council of Trent. The first error is that God commands things that are impossible and that, in such cases, man is not bound to obey the divine commandment, but may search for a way around it. Today this is sometimes called “discernment” or “pastoral accompaniment.” Often it amounts to no more than having a priest or someone else say, “In your case the commandment of God cannot possibly be binding. You can in good conscience, hold yourself excused from it because for you it is impossible.” The second error is that of the Pelagians and the Semi-Pelagians who held that there is nothing a man cannot do without the exercise of his will and enough natural energy. This error glorifies man, denies or minimizes the need for grace, and robs God of the glory due to Him. Both errors begin and end in pride.

Saint Benedict exhorts us throughout the Holy Rule to ask for grace in prayer, and to rely on grace in all our works. This is the principle that Saint Benedict sets forth in the very first lines of the Prologue: “In the first place, whatever good work thou beginnest to do, beg of Him with most earnest prayer to bring to completion.” The man who is always conscious of his weakness will pray always for grace and, even if this grace seems to be withheld from him, he will persevere in asking for it, knowing that God is greatly glorified by the poor man who perseveringly lays open his weakness to the grace of Christ. The most effective way of asking for and obtaining grace is by means of recourse to the Immaculate Virgin Mary. “O Mary, conceived without sin, pray for us who have recourse to thee.”