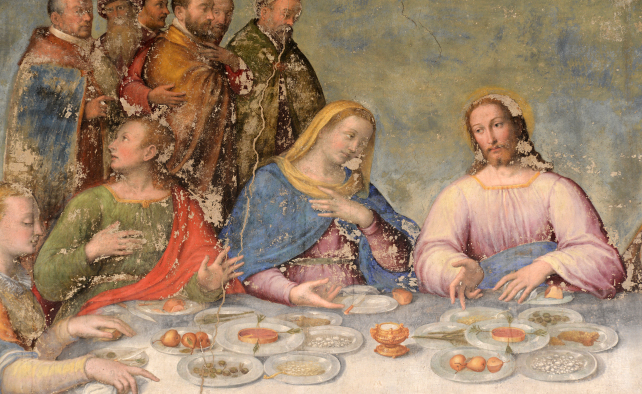 The First Four Utterances
Our Lady speaks but seven times in the Gospels. Today’s Holy Mass and Divine Office enshrine the last of these seven utterances. The first four utterances of the Mother of God are given us in the liturgy of the Ember Days of Advent:

4. “And Mary said: My soul doth magnify the Lord. And my spirit hath rejoiced in God my Saviour. [Because he hath regarded the humility of his handmaid; for behold from henceforth all generations shall call me blessed. Because he that is mighty, hath done great things to me; and holy is his name. And his mercy is from generation unto generations, to them that fear him. He hath shewed might in his arm: he hath scattered the proud in the conceit of their heart. He hath put down the mighty from their seat, and hath exalted the humble. He hath filled the hungry with good things; and the rich he hath sent empty away. He hath received Israel his servant, being mindful of his mercy: As he spoke to our fathers, to Abraham and to his seed for ever.”] (Luke 1:46–55)

The Fifth Utterance
On the Sunday within the Octave of the Epiphany, the fifth utterance is given us:

5. “And his mother said to him: Son, why hast thou done so to us? behold thy father and I have sought thee sorrowing.” (Luke 2:48)

The Sixth and Seventh Utterances
Finally, on the Second Sunday after the Epiphany, we hear the sixth and seventh utterances of the Mother of God. It is these that will carry us through the whole liturgical year until, the mystic circle made complete once again, we enter upon a new Advent.

No one can draw near to the Mother of God, the Ark of the Covenant, without entering into the silence of the heavenly sanctuary. «And when he had opened the seventh seal, there was silence in heaven, as it were for half an hour» (Apocalypse 8:1). What is this measure of silence? A half–hour in heaven can, in no way, be compared to the fleeting half–hours of earthly timepieces. Is this silence in heaven not brought to earth in the space of a single rosary? What is the rosary but a progressive entrance — mystery by mystery, and Ave by Ave — in the silence of heaven, into the silence of Mary?

The Maternal Heart of Mary
What does the last recorded utterance of the Blessed Virgin Mary tell us about her? It tells us, first of all, that Our Lady is attentive. No one spoke to the Mother of Jesus of the lack of wine that would have brought humiliation upon the bridegroom and troubled the joy of the feast. Mary observed quietly. She saw what would have escaped the attention of another. Her maternal Heart compelled her to intervene, and so she spoke to her Son” “They have no wine” (John 2:3).

There is no detail of our days and nights that escapes Our Lady’s notice. The maternal Heart of Mary is, at every moment, attentive to the circumstances of our lives. Mary’s silence is not the silence of one removed from those around her and absorbed in herself. It is the silence of a maternal Heart intent on observing everything that impinges upon the life of her children. There is no sorrow of ours, no need, no anguish, no temptation, and even no sin, that Our Lady does not see and take to heart.

“Woman, what is that to me and to thee? My hour is not yet come” (John 2:4). Mary received her Son’s mysterious response not as a rebuff but as an invitation to trust or, as the Irish say, to “leave it with Him”. Our Lady had learned, from the time she laid her Jesus in the manger, to gaze into His Face and to read the light shining in His eyes. This is, I think, what happened at Cana. Our Lady looked into the eyes of her Divine Son and saw there the promise of the revelation of His glory. Turning to the waiters, she said, “Whatsoever he shall say to you, do ye” (John 2:5). This is the last recorded word of the Mother of God in the Gospels.

Listening to the Mother of God
“Whatsoever he shall say to you, do ye” (John 2:5). There is in the Christian life a moment in which one realises that a childlike obedience to the Mother of God is the beginning of obedience to the commandments of her Son. Mary is the gateway to newness of life. “Come to me,” she says, “that thou mayest return by the labour of obedience to Him from Whom thou hadst departed through the sloth of disobedience” (Prologue, Rule of Saint Benedict). The quiet presence of Mary in one’s life and the intercession of her maternal Heart make easy the things that at first appear difficult and altogether beyond one’s strength. It is Mary who accompanies her sons along “the hard and rugged paths by which we walk towards God ” (Rule of Saint Benedict, Chapter LVIII); at every step she offers encouragement and consolation.  The sacred liturgy places these words on her lips:

Listen to me, then, you that are my sons, that follow, to your happiness, in the paths I shew you; listen to the teaching that will make you wise, instead of turning away from it. Blessed are they who listen to me, keep vigil, day by day, at my threshold, watching till I open my doors. (Proverbs 8:32–34)

Jesus completes the words of His Mother, saying:

The sign of water changed into wine at the behest of the Mother of Jesus — and in so lavish a quantity — reveals the glory of His divinity, and causes His disciples to believe in Him, that is, to stake their lives on Him and on the efficacy of His priestly prayer:

Mary is the Mediatrix of all graces; she is the almoner of the Divine Munificence; she is the Mother of the Mystical Body, bending over the little ones, comforting those who weep, and lifting up the fallen. So attuned is her maternal Heart to the Heart of God that she, like Him, “fills the hungry with good things” (Luke 1:53) and causes wine to flow in abundance “lest anyone be troubled or grieved in the house of God” (Rule of Saint Benedict, Chapter XXXI).