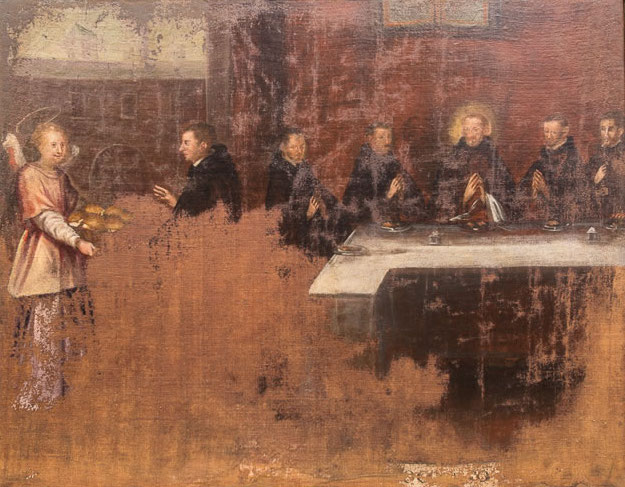 14 Mar. 14 July. 13 Nov.
Let the weekly servers take each a cup of drink and a piece of bread over and above the refection, that so they may serve their brethren, when the hour cometh, without murmuring or great labour. On solemn days, however, let them forbear until after Mass.* On Sunday, as soon as Lauds are ended, let both the incoming and the outgoing servers fall on their knees before all, in the Oratory, and ask their prayers. Let him who endeth his week, say this verse: “Blessed art Thou Lord God, Who hast helped me and comforted me;” which being thrice repeated, he shall receive the blessing. Let him that beginneth his week follow, and say: “O God, come to my assistance: O Lord, make haste to help me.” Let this likewise be thrice repeated by all; and having received the blessing, let him enter on his office.

Sine murmuratione et gravi labore serviant fratribus suis. Saint Benedict orders the weekly service with a view to avoiding two things: murmuring and heavy labour. The vice of murmuring can drag down the spirit of a whole community. The brother who goes about his duties with a long face or a reluctant step affects both his co–workers and those whom he is serving. Mental murmuring is as pernicious as verbal murmuring; it cannot, in any case, be concealed. The mental murmurer may think that he is keeping his thoughts to himself when, in fact, it is obvious to those who observe him that he is conflicted, or angry, or critical.

The abbot and the brother in charge of the kitchen service must be attentive lest the work become excessively burdensome. It may happen, when there are more than fourteen or fifteen at table, that two servers are not sufficient. In such cases the two weekly servers must ask for the assistance of a  third. There is no virtue in taking on too much while murmuring inwardly about it.

The cup of drink and piece of bread given to the servers before the meal is yet another example of the Benedictine infirmitatum consideratio. A brother may, out of pride or a kind of self–sufficiency, want to forego the refreshment permitted before the meal. It is always better to accept what is offered out of consideration for infirmity than to refuse it and become swollen with pride.

The verses that Saint Benedict chooses for the blessing of the outgoing and incoming service are profoundly significant. The outgoing servers sing: Blessed art Thou Lord God, Who hast helped me and comforted me. In everything he undertakes, a monk relies upon the help and comfort of Christ, making the words of the Apostle his own:

I know both how to be brought low, and I know how to abound: (every where, and in all things I am instructed) both to be full, and to be hungry; both to abound, and to suffer need. I can do all things in him who strengtheneth me. (Philippians 4:12–13)

Until a man has begun to bless God in all the circumstances of daily life, he is not yet a monk. When a monk makes thanksgiving and praise his habitual response to life’s joys and challenges, he discovers the secret of an inner joy that nothing can take away from him.

Following Saint John Cassian’s teaching on ceaseless prayer, Saint Benedict would have his monks begin their service by confessing their urgent and utter need of divine assistance: O God, come to my assistance: O Lord, make haste to help me. It sometimes happens that a novice or young monk runs along on his own resources. He may, in fact, be capable of outrunning everyone else in the community. He may be able to do more in less time, to carry heavier burdens than anyone else, to excel at all that is asked of him, and to demonstrate dazzling natural gifts. Such a brother may think that he is running to claim the prize when, in fact, he is running towards his own undoing. We read in Proverbs: “Presumption comes first, and ruin close behind it; pride ever goes before a fall” (Proverbs 16:18). A humble and confident reliance on the grace of Christ is the ground of a monk’s service.  It is better to fail and remain humble than to succeed and become prideful. Ceaseless prayer is, before all else, a humble confession of one’s brokenness and unremitting need of grace.