Skip to content
HomeRule of Saint BenedictTo prefer nothing to the love of Christ (IV:1) 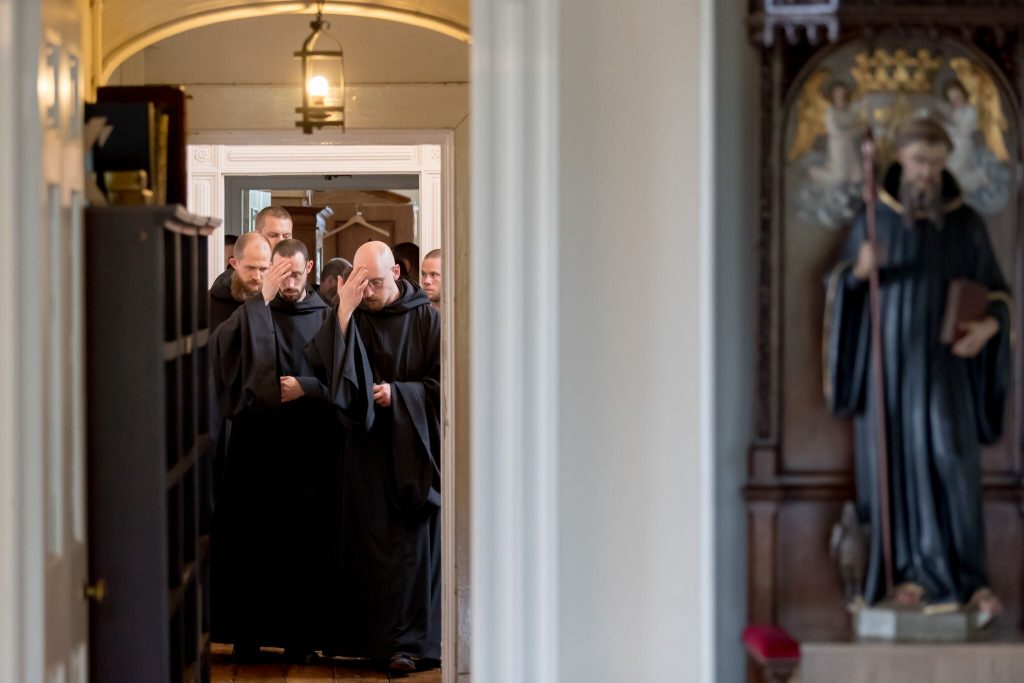 Saint Benedict lays the foundation of the monastic life in the love of God with all one’s heart, all one’s soul, and all one’s strength, and then in the love of one’s neighbour as oneself. It is the teaching of the Beloved Disciple, received from the Heart of Christ and tirelessly repeated to those who, in later years, gathered around him to ask for a word:

Dearly beloved, let us love one another, for charity is of God. And every one that loveth, is born of God, and knoweth God. He that loveth not, knoweth not God: for God is charity. By this hath the charity of God appeared towards us, because God hath sent his only begotten Son into the world, that we may live by him. In this is charity: not as though we had loved God, but because he hath first loved us, and sent his Son to be a propitiation for our sins. My dearest, if God hath so loved us; we also ought to love one another. (1 John 4:7–11)

Saint Benedict spells out the exigencies of love for one another. We are not to kill: this refers to more than the violent act of homicide by which one man snuffs out the life of another. It refers also to the slow unbloody homicide by which one man treats another as if he wished him dead, or as if he were already dead. We are not to commit adultery: this refers to every thought, word, and action by which a man violates the sacred enclosure of marriage or, in any way, steps outside the enclosure of monastic chastity. Stealing and covetous thinking are related; by the first, a man lays hands on the object of his desire and takes it for himself. By the second, a man thinks of the object of his desire as if it were lawfully his.

Sins of false witness are not limited to accusations of the innocent and to the explicit and deliberate destruction of another’s reputation. There are also the sins of the innuendo, of the suggestion tossed out in passing, of the damning question asked and left without a response. Men generally accuse others of the very sins that weigh heavily upon their own conscience. Men can also take a diabolical pleasure is seeing the sins of others uncovered, in knowing that others have been blamed, or found guilty, or fallen under a cloud of accusations. This is not the way of our fathers in the monastic life:

In Scetis a brother was once found guilty. They assembled the brothers, and sent a message to Moses telling him to come. But he would not come. Then the presbyter sent again saying, ‘Come, for the gathering of monks is waiting for you.’ Moses got up and went. He took with him an old basket, which he filled with sand and carried on his back. They went to meet him and said, ‘What does this mean, abba?’ He said, ‘My sins run out behind me and I do not see them and I have come here today to judge another.’ They listened to him and said no more to the brother who had sinned but forgave him.

There was a brother who kept a woman in his cell. The other fathers decided to go and expel him from the monastery. An abba heard about this and visited the brother beforehand. The brother hid the woman in a basket, before the abba came in the door. The abba then proceeded to sit on top of the basket and converse with the brother until the other fathers came to visit. The abba ordered the other fathers to search the cell and find this woman. Not finding her, because the abba (who had a gift of seeing hidden things) was sitting on the basket containing her. The abba then chastised the fathers for falsely accusing the brother and judging him. They asked for forgiveness and left. Then the abba got off the basket and told the brother, “Brother, be careful” and left.

The 8th and 9th Instruments derive from the ancient Christian anthropology by which every man is created in the image and likeness of God: “To honour all men,” and “Not to do to another what one would not have done to oneself.” The implications of these two instruments are spelled out in Chapter XXVI, “Of the Sick Brethren,” and in Chapter LIII, “Of Receiving Guests.” Blessed Schuster never tires of repeating that one of the characteristic traits of the Benedictine monk is an exquisite courtesy.

There follow four Instruments related to the humble and quotidian following of Christ along the way of the Cross: self–denial, bodily chastisement, the renunciation of comfortable living, and the love of fasting. These are the traditional means by which a monk begins to practice what Saint Benedict writes at the end of the Prologue:

We have, therefore, to establish a school of the Lord’s service, in the setting forth of which we hope to order nothing that is harsh or rigorous. But if anything be somewhat strictly laid down, according to the dictates of sound reason, for the amendment of vices or the preservation of charity, do not therefore fly in dismay from the way of salvation, whose beginning cannot but be strait and difficult. But as we go forward in our life and in faith, we shall with hearts enlarged and unspeakable sweetness of love run in the way of God’s commandments; so that never departing from His guidance, but persevering in His teaching in the monastery until death, we may by patience share in the sufferings of Christ, that we may deserve to be partakers of His kingdom.

Self–denial, bodily chastisement, the renunciation of comfortable living, and the love of fasting are practiced according to the dictates of sound reason, for the amendment of vices, or for the preservation of charity, and this always under the blessing of obedience, lest they fall under the condemnation of Saint Benedict in Chapter XLIX: “What is done without leave of the spiritual father shall be imputed to presumption and vain-glory, and merit no reward.” The man who begins to glory in his self–denial, who secretly admires his own record of bodily chastisement, whose renunciations puff him up, and whose love of fasting is but a disguised love of self is not following Christ humbly along the way of the Cross; he is, rather, constructing an image of himself that, in the end, will come between himself and God.

Saint Benedict then gives us a condensed form of the Corporal and Spiritual Works of Mercy. One may wonder how an enclosed monk, who owns nothing, and therefore has nothing to give, and who has no occasion to visit the sick, to bury the dead, to help in affliction, and to console the sorrowing, can put these Instruments into practice. Be certain of this: a monk truly united to God — and this is the goal of the monastic life — contributes thereby to the relief and salvation of a great multitude. Our vocation does not exclude giving alms to the poor with a view to practicing the Corporal and Spiritual Works of Mercy. It remains, nonetheless, that the monk who cleaves to Christ in hiddenness and humility, becomes for the poorest and most afflicted members of the Mystical Body a conduit of healing and an instrument of reparation.

The 20th Instrument enjoins a monk to become a stranger to the ways of the world. Each of us carries in himself a microcosm of all that is dysfunctional, broken, and corrupt in the world. We can easily go through life blind to the worldliness that colours our judgments, moves our desires, and frames our thinking. The conclusion of the First Epistle of Saint John address this:

We know that we are of God, and the whole world is seated in wickedness. And we know that the Son of God is come: and he hath given us understanding that we may know the true God, and may be in his true Son. This is the true God and life eternal. Little children, keep yourselves from idols. Amen. (1 John 5:19–21)

The 21st Instrument sums up all that precedes it and informs all that follows it: “to prefer nothing to the love of Christ.” The monk discovers that Christ loves him. “And Jesus looking on him, loved him” (Mark 10:21) Saint Benedict’s monk wants nothing so much as to love Christ in return, not in the accumulation of good actions, nor in heaping words upon words, nor in cultivating pious sentiments, but in an unconditional surrender of himself to the love of God in Christ, the love by which God first loved him.