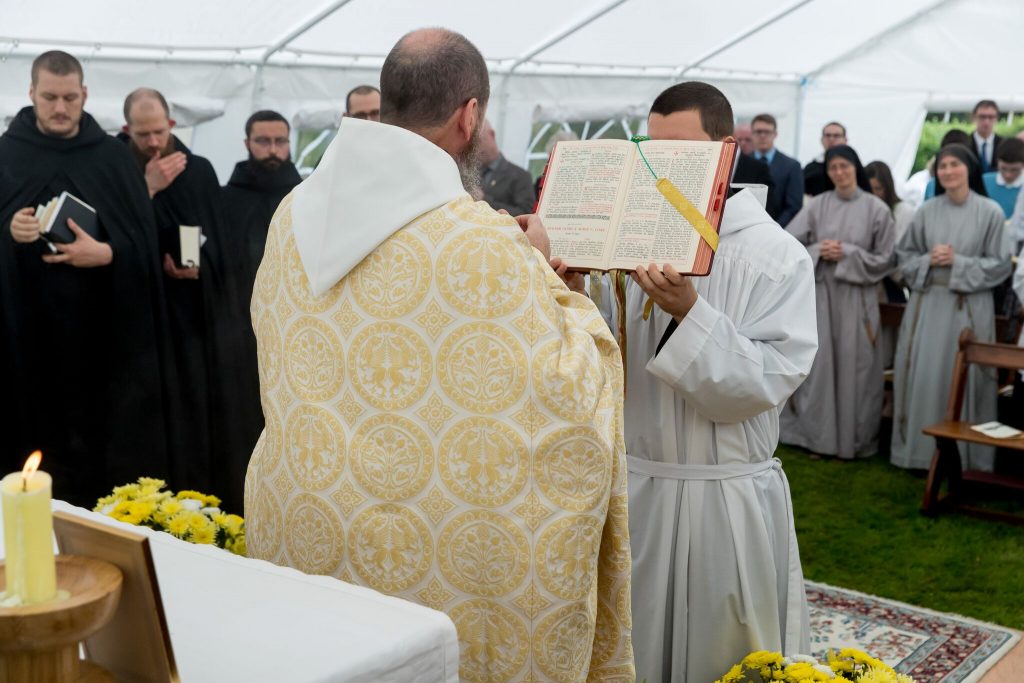 5 Jan. 6 May. 5 Sept.
Hence also the Lord saith in the Gospel: “He that heareth these words of Mine, and doeth them, is like a wise man who built his house upon a rock: the floods came, the winds blew, and beat upon that house, and it fell not, because it was founded upon a rock.” And the Lord in fulfilment of these His words is waiting daily for us to respond by our deeds to His holy admonitions. Therefore are the days of our life lengthened for the amendment of our evil ways, as saith the Apostle: “Knowest thou not that the patience of God is leading thee to repentance?” For the merciful Lord saith: “I will not the death of a sinner, but that he should be converted and live.”

Note well Saint Benedict’s constant reference to the Lord who speaks to us in the Gospel. I return to what I said to you yesterday: the monk finds his daily fare in the Psalms, the Gospels, and the Apostle. The Psalms constitute our daily bread: all 150 of them being prayed in the course of one week, according to Saint Benedict’s non–negotiable injunction:

Above all, we recommend that if this arrangement of the Psalms be displeasing to anyone, he should, if he think fit, order it otherwise; taking care in any case that the whole Psalter of a hundred and fifty Psalms be recited every week, and always begun afresh at the Night-Office on Sunday. For those monks would shew themselves very slothful in the divine service who said in the course of a week less than the entire Psalter, with the usual canticles; since we read that our holy fathers resolutely performed in a single day what I pray we tepid monks may achieve in a whole week. (Chapter XVIII)

And so ye also, if ye be willing to apply to the reading of him with a ready mind, will need no other aid. For the word of Christ is true which saith, “Seek, and ye shall find, knock, and it shall be opened unto you.”

Saint Paul is incandescent with the fire of which Jesus speaks in the Gospel: “I am come to cast fire on the earth: and what will I, but that it be kindled?” (Luke 12:49). Origen quotes a mysterious saying of Our Lord: “But the Saviour himself saith: He who is near me is near the fire; he who is far from me, is far from the kingdom.” There is a particular grace attached to the Epistles of Saint Paul: it is a communication of fire to the soul that hears them, repeats them, and prays them.

Returning to what Saint Benedict says about the Gospel: the Gospel is not mere text. Our Lord Himself tells us this: “The words that I have spoken to you, are spirit and life” (John 6:63). When a monk hears the liturgic Gospel, when he reads it for  himself in lectio divina, when he repeats it and turns in to prayer, he finds himself saying with Saint Peter:

Lord, to whom shall we go? thou hast the words of eternal life. And we have believed and have known, that thou art the Christ, the Son of God. (John 6:69–70)

Again, I send you back to the Life of Saint Antony by Saint Athanasius:

He entered the church, and it happened the Gospel was being read, and he heard the Lord saying to the rich man, ‘If you would be perfect, go and sell that you have and give to the poor; and come follow Me and you shall have treasure in heaven.’ Antony, as though God had put him in mind of the Saints, and the passage had been read on his account, went out immediately from the church, and gave the possessions of his forefathers to the villagers— they were three hundred acres , productive and very fair— that they should be no more a clog upon himself and his sister. And all the rest that was movable he sold, and having got together much money he gave it to the poor, reserving a little however for his sister’s sake. And again as he went into the church, hearing the Lord say in the Gospel, ‘be not anxious for the morrow,’ he could stay no longer, but went out and gave those things also to the poor.

The particular saying of Our Lord to which Saint Benedict draws our attention today is: ““He that heareth these words of Mine, and doeth them, is like a wise man who built his house upon a rock: the floods came, the winds blew, and beat upon that house, and it fell not, because it was founded upon a rock” (Matthew 7:24–25). A man builds his house upon a rock when he allows the hearing of the words of Christ to change Him, when he hears them without resistance, without shielding himself from their full effect. Saint Bernard describes the full of effect of the words of Christ in terms of a mysterious visitation of the Word. Listen to Saint Bernard:

He is life and power, and as soon as he enters in, he awakens my slumbering soul; he stirs and soothes and pierces my heart, for before it was hard as stone, and diseased.  So he has begun to pluck out and destroy, to build up and to plant, to water dry places and illuminate dark ones; to open what was closed and to warm what was cold; to make the crooked straight and the rough places smooth, so that my soul may bless the Lord, and all that is within me may praise his holy name.  So when the Bridegroom, the Word, came to me, he never made known his coming by any signs, not by sight, not by sound, not by touch.  It was not by any movement of his that I recognized his coming; it was not by any of my senses that I perceived he had penetrated to the depths of my being.  Only by the movement of my heart, as I have told you, did I perceive his presence; and I knew the power of his might because my faults were put to flight and my human yearnings brought into subjection.  I have marvelled at the depth of his wisdom when my secret faults have been revealed and made visible; at the very slightest amendment of my way of life I have experienced his goodness and mercy; in the renewal and remaking of the spirit of my mind, that is of my inmost being, I have perceived the excellence of his glorious beauty, and when I contemplate all these things I am filled with awe and wonder at his manifold greatness. (Sermon 74 on the Song of Songs)