Skip to content
HomeRule of Saint BenedictI came not to do mine own will (VII:6) 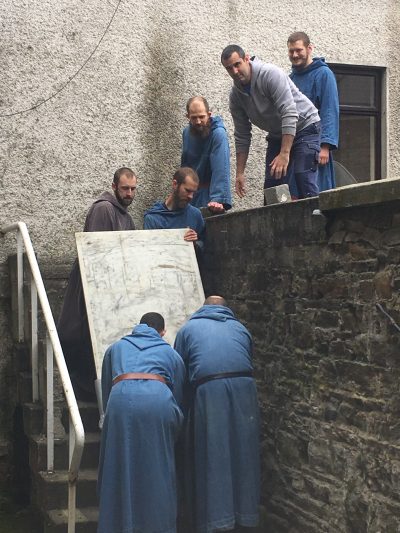 30 Jan. 31 May. 30 Sept.
The second degree of humility is, that a man love not his own will, nor delight in fulfilling his own desires; but carry out in his deeds that saying of the Lord: “I came not to do mine own will, but the will of Him Who sent me.” And again Scripture saith: “Self-will hath punishment, but necessity wins the crown.”

The second degree of humility hearkens back to Chapter V, Of Obedience. Obedience is the foundation, the support, and the crown of monastic life. A man enters life as a baby, and enters the cloister as a postulant, loving his own will. There is in this attachment to one’s own will a certain good, insofar as one’s will is ordered to pursuing and preserving “the things that are pleasing to God” (Baruch 4:4). The monastic way strengthens the rightly ordered use of one’s will by placing a man in “the workshop . . . that is the cloister of the monastery, and stability in the community” (Ch. IV), and by freeing him to say: “I choose and resolve to seek God truly (CH. LVIII) and to hold nothing dearer than Christ (Ch. V) by “taking up the strong and bright weapons of obedience”; by plying “the tools of the spiritual craft” (Ch. IV); and by exercising “the good zeal, which keepeth us from vice, and leadeth to God and to life everlasting” (Ch. LXXII). Obedience is not an irresponsible abdication of one’s own will; it is the free engagement of one’s own will and the re–ordering of one’s will to the Will of the Father in imitation of Christ. “I came down from heaven,” He says, “not to do my own will, but the will of him that sent me” (John 6:38).

Saint Benedict says that the second degree of humility is that a man not delight in fulfilling his own desires. He speaks here not of the desires planted deep in the heart of man, the desires that come from God and lead to God; he speaks here of the desires inflamed by “the concupiscence of the flesh, and the concupiscence of the eyes, and the pride of life, which is not of the Father, but is of the world” (1 John 2:16). There are desires that promise a glittering happiness but that, in the end, lead to desolation and destruction. And there are desires that lift the heart heavenward and that lead to “things no eye has seen, no ear has heard, no human heart conceived, the welcome God has prepared for those who love him” (1 Corinthians 2:9).

It is not always easy to distinguish among one’s desires and to separate those that are harmful from those that are life–giving. This is where a monk must open his heart to his abbot and submit to him all its contradictions and perplexities. After this, a monk will follow what he is asked to do, trusting God to accept the sacrifice of his own will, and to turn it to His glory. “If he seeth the weight of the burden altogether to exceed his strength, let him seasonably and with patience lay before his Superior the reasons of his incapacity to obey, with out shewing pride, resistance, or contradiction. If, however, after this the Superior still persist in his command, let the younger know that it is expedient for him; and let him obey for the love of God, trusting in His assistance” (Ch. LXVIII).

A monk is not a man devoid of passion, a listless fellow with no dreams, no challenges, and no goals. He is, rather, a man whose passions are harnessed to drive him towards God, whose dreams raise him above himself, whose challenges open his weakness to the deployment of grace, and whose goals are where his treasure is, ubi vera sunt gaudia. Monastic profession does not make a man a diminished person; it allows him the space and the freedom to become the beatus vir (blessed man) of the 1st Psalm.

His will is in the law of the Lord, and on his law he shall meditate day and night. And he shall be like a tree which is planted near the running waters, which shall bring forth its fruit, in due season. And his leaf shall not fall off: and all whatsoever he shall do shall prosper. (Psalm 1:1)