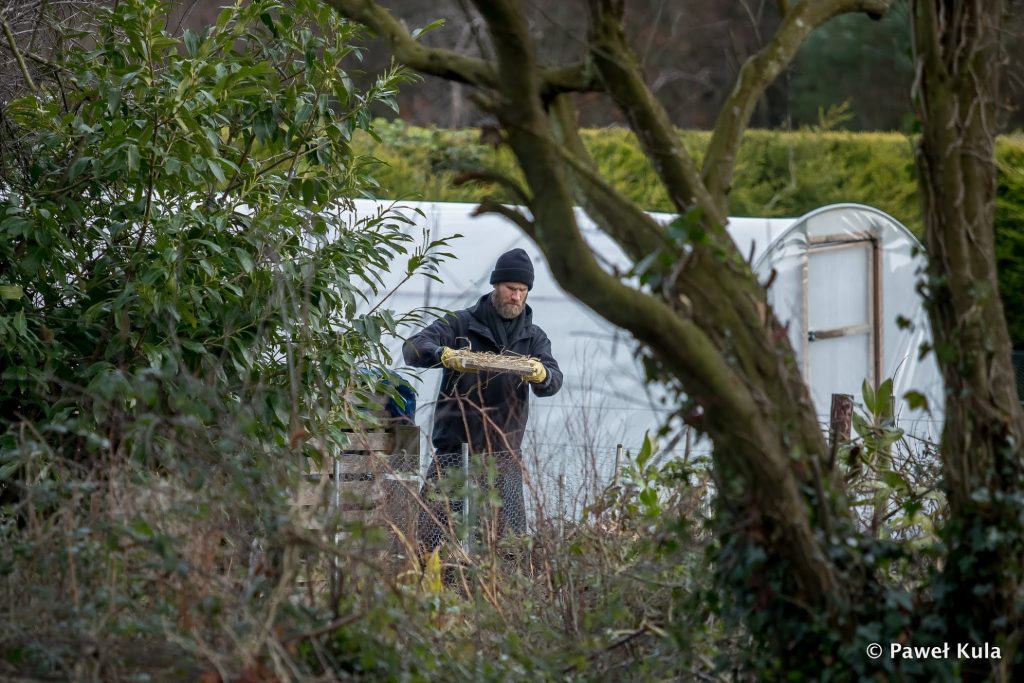 CHAPTER XLVIII. Of the daily manual labour
28 Mar. 28 July. 27 Nov.
Idleness is an enemy of the soul; and hence at certain seasons the brethren ought to occupy themselves in the labour of their hands, and at others in holy reading. We think, therefore, that the times for each may be disposed as follows: from Easter to the first of October, let them, in going from Prime in the morning, labour at whatever is required of them until about the fourth hour. From the fourth hour until near the sixth let them apply themselves to reading, And when they rise from table, after the sixth hour, let them rest on their beds in perfect silence; or if any one perchance desire to read, let him do so in such a way as not to disturb any one else. Let None be said in good time, at about the middle of the eighth hour: and then let them again work at whatever has to be done until Vespers. And if the needs of the place, or their poverty, oblige them to labour themselves at gathering in the crops, let them not be saddened thereat; because then are they truly monks, when they live by the labour of their hands, as did our fathers and the Apostles. Yet let all be done with moderation, on account of the faint-hearted.

Again today, the first and last sentences of the appointed passage sum up our father Saint Benedict’s teaching:

Idleness is an enemy of the soul; and hence at certain seasons the brethren ought to occupy themselves in the labour of their hands, and at others in holy reading. . . . Yet let all be done with moderation, on account of the faint-hearted.

Idleness presents itself in many guises. It may be the result of weariness or acedia (ἀκηδία), or of a physical or mental inability to focus on the task at hand, or of one’s attachment to doing only what one wants to do, when one wants to do it, in the way one wants to do it. In every case, idleness is harmful because it opens the door to the demons’ suggestions that one’s life is meaningless, or aimless, or a failure. The Desert Fathers offer practical teachings on all of these λογίσμοι (unwanted thoughts or temptations).

In the case of weariness or acedia, the remedy is to set realistic goals for oneself in order to complete a task within the allotted time. For instance, Brother Verecundus says, “If I tell myself that I am going to weed my whole garden  today, I shall soon look at it, judge it immense, measure it against my own weakness, and give up altogether. If, however, Brother Verecundus says, “I shall devote the next half hour to weeding two rows of my garden, and then I shall take a little rest”, he will find satisfaction in his work and, having completed it, want to devote yet another half–hour to weeding two more rows”. A brother may need to ask a blessing on the work he proposes within a certain lapse of time and render an account of it when he has completed it. Some brothers fall into a state of acedia that makes every task appear so daunting as to plunge them into discouragement. The only cure for this malady is to take up small, measured tasks within a fixed period of time, with the blessing of obedience, to render an account of the work when the time is up, and to ask for a blessing to undertake another task. A monk achieves nothing good without the blessing of the abbot, obedience, and accountability.

Let each one, however, make known to his Abbot what he offereth, and let it be done with his blessing and permission: because what is done without leave of the spiritual father shall be imputed to presumption and vain-glory, and merit no reward. Everything, therefore, is to be done with the approval of the Abbot. (Chapter XLIX)

A mutation of this sort of acedia is paralysing perfectionism.  It sometimes happens that a brother falls into an obsession with minutiae. He becomes so punctilious as to lose sight of the work as a whole. He stops at a minor detail, begins to torture himself over it and, in the end, becomes so paralysed by the single detail that he cannot complete the task. The cure for this neurosis is to set aside the troubling detail and continue working. More often than not, the detail set aside is clarified in the course of things.

The second sort of idleness is the result of a real physical or mental impairment. The brother with a  broken leg cannot be expected to carry rocks from one place to another. The brother with poor eyesight cannot be expected to verify addresses on a spreadsheet or work in front of a computer screen. The brother who suffers from mental fatigue must be given a variety of different tasks, lest any one task so exhaust him that he becomes incapable of applying himself to anything. Some sort of light physical work, alternated with short periods of intellectual work, is the best remedy for this condition.

The third and most pernicious sort of idleness is rooted in pride, and pride always manifests itself in some kind of disobedience. Brother Philibert says, “I want to choose my work and be left free to do it when I choose and in the way I think best”. Brother Athelstan says, “No one understands that I am, in effect, too light for heavy work and too heavy for light work. I must then do only as I see fit”. Brother Gorgonius says, “I am highly qualified. I am gifted. I have unique interests and rare abilities. I must therefore be left free to use my qualifications, deploy my gifts, explore my interests, and hone my abilities. I am, after all, quite exceptional”. The only remedy for such λογίσμοι is prompt, unquestioning, and cheerful obedience. If such obedience seems altogether beyond what one thinks one can do, one must say to oneself, “Self, the work period will be at most two or three hours. You will survive; at the end of the day, you will experience a certain satisfaction for having done the very thing you thought you could not do; and you will have the merit of obedience”.

The second principle in today’s passage is, “Yet let all be done with moderation, on account of the faint-hearted”. This care for the fainthearted, the pusillanimous, is characteristic of Saint Benedict. The abiding concern of Saint Benedict is that the bruised reed not be broken, nor the rusted pot scraped so vigourously as to break it and render it useless. Certain personalities seem unable to moderate themselves; they throw themselves into great flurries of activity, burning the midnight oil, rising early to start again, neglecting lectio divina and prayer, and justifying it all by saying, “But I must keep on or I will never finish the task”. What happens? By not beginning and ending work at the prescribed times, by eschewing moderation and discretion, one’s whole life falls into imbalance. Then, the demons make their move. “You see? You are undisciplined, incapable of following the horarium. You are a sorry excuse for a monk. You will never be able to find your footing in this life”.

I knew a young monk who had some artistic gifts. The sacristan asked the Master of Novices if this young monk might be allowed to create a special decoration for the feast of Christ the King.  The young monk hauled out bolts of fabric, scissors, glue, flowers, candles, and every sort of decorative paraphernalia. He turned the noviciate common room into a set designer’s backstage workshop. He stopped reading, neglected his visits to the Blessed Sacrament, put aside his rosary, dispensed himself from as many common observances as he could, and lay awake at night thinking about his project. By the time the feast of Christ the King came, the young monk was a mere shadow of himself. He was utterly spent, miserable, alienated from his brethren, and incapable of finding foothold in the monastic observance. He went to his Father Master and said, “Why did you allow me to do this? Why did you allow this to happen? Did you not see that I was consumed by the work? You let me rush to my ruin and did not even intervene”. The Father Master said, “I could not have stopped you. Your obsession with this creative work went to your head and made you unreasonable. You lost all sense of moderation and balance. Had I used my authority to stop you, you would have become bitter and accused me of not allowing you to use your talents. So I gave you enough rope to hang yourself”. The young monk had a moment of grace. He saw what had happened, repented of his self–will, lack of moderation, disobedience, and hubris, and swore that never again would he allow work to gain the upper hand. He resolved then to follow the horarium strictly and from that day forward began slowly to recover from his season of folly. His underlying weakness remained nonetheless and even t0day he must be vigilant lest he fall into extremes and lose his balance. His one safeguard is a rigorous obedience and a regular rhythm of personal prayer under the blessing of his abbot.