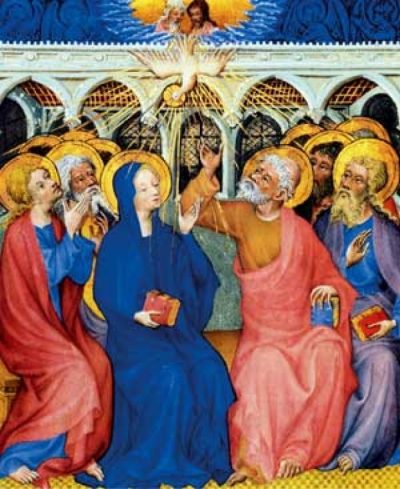 CHAPTER XVIII. In What Order the Psalms Are to Be Said
22 Feb. 23 June. 23 Oct.
At Tierce, Sext and None on Monday are to be said the nine remaining parts of the hundred and eighteenth Psalm, three parts at each Hour. This Psalm having thus been said through in two days, that is, Sunday and Monday, let the nine Psalms from the hundred and nineteenth to the hundred and twenty-seventh be said on Tuesday at Tierce, Sext and None – three at each Hour. And these Psalms are to be repeated at the same Hours every day until Sunday; the arrangement, moreover, of hymns, lessons and versicles remaining the same throughout, so as always to begin on Sunday from the hundred and eighteenth Psalm.

Condensed Moments of Prayer
The so-called Little Hours are intense and condensed moments of prayer occurring more or less every three hours throughout the day. Each of the Little Hours is associated with a mystery in the Passion of Our Lord, and with an event in in the life of the early Church related in the Acts of the Apostles. In recalling these mystery-events, the Church experiences anew the grace that they signify, and this, day after day. The four Little Hours: Prime, Tierce, Sext, and None constitute the rhythmic pulsation of a prayer that, in obedience to the word of the Lord in the Gospel (Luke 18:1) and the teaching of the Apostle (1 Thessalonians 5:17), we endeavour to make ceaseless.

Before and After
The post-Conciliar reform of the Divine Office (the Liturgia Horarum) effectively discouraged the prayer of the Little Hours by making two out of three of them optional on any given day, and by presenting them in a confusing manner. Paradoxically, before the post-Conciliar reforms, there was, even among lay Catholics, a certain enthusiasm for the Little Hours due, in large part, to the beautiful pastoral presentation of them in the Collegeville editions of the Roman Breviary and the Short Breviary, with explanatory notes by Dr. Pius Parsch. A healthy liturgical piety, based on the Missal and the Breviary, flourished — especially among the thriving lay movements such as the Legion of Mary, the Catholic Worker, Madonna House, and the Grail — in the years between the Second World War and the Second Vatican Council. Only after the Second Vatican Council did this liturgical piety begin to wane and, in some places, shrivel up and disappear. Private devotions, revelations, and extraneous pious practices, some of a charismatic stamp, soon swelled to fill the void left by a shrinking Liturgical Movement.

Tierce: The First Station in a Daily Via Crucis
The Hour of Tierce recalls Jesus being charged with the wood of the Cross. It is the beginning of the Church’s daily liturgical via crucis condensed into three stations.

And Pilate gave sentence that it should be as they required. And he released unto them him who for murder and sedition, had been cast into prison, whom they had desired; but Jesus he delivered up to their will. And as they led him away, they laid hold of one Simon of Cyrene, coming from the country; and they laid the cross on him to carry after Jesus. And there followed him a great multitude of people, and of women, who bewailed and lamented him. But Jesus turning to them, said: Daughters of Jerusalem, weep not over me; but weep for yourselves, and for your children. For behold, the days shall come, wherein they will say: Blessed are the barren, and the wombs that have not borne, and the paps that have not given suck. Then shall they begin to say to the mountains: Fall upon us; and to the hills: Cover us. For if in the green wood they do these things, what shall be done in the dry? And there were also two other malefactors led with him to be put to death. (Luke 23:24-32) 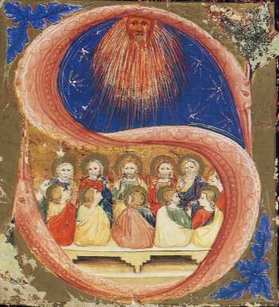 We ought to pray to and invoke the Holy Spirit, for each one of us greatly needs His protection and His help. The more a man is deficient in wisdom, weak in strength, borne down with trouble, prone to sin, so ought he the more to fly to Him who is the never-ceasing fount of light, strength, consolation, and holiness. (Pope Leo XIII, Divinum Illud Munus, 9 May 1897)

In will and deed, by heart and tongue,
With all our powers, thy praise be sung;
And love light up our mortal frame,
Till others catch the living flame.

When the Church, in her liturgy, evokes a particular mystery of Christ, that mystery is rendered present in an efficacious and penetrating way. It is, in some way, renewed in the souls of the those who, surrendering to the prayer of the Church, allow the liturgy to possess them and carry them, like feathers on the wind, ad Patrem, towards the Father, with the Son, in the Holy Ghost.

And when the days of the Pentecost were accomplished, they were all together in one place: And suddenly there came a sound from heaven, as of a mighty wind coming, and it filled the whole house where they were sitting. And there appeared to them parted tongues as it were of fire, and it sat upon every one of them: And they were all filled with the Holy Ghost, and they began to speak with divers tongues, according as the Holy Ghost gave them to speak. (Acts 2:1-4)

Sext: Christ Lifted Up from the Earth
The Hour of Sext, the second station in the Church’s daily via crucis, recalls the crucifixion of Jesus. Nailed to the wood of the Cross, He is fixed in a position of offering to the Father as the Redeemer of Men. “Now is the judgment of the world: now shall the prince of this world be cast out. And I, if I be lifted up from the earth, will draw all things to myself. Now this he said, signifying what death he should die.”

For the Salvation of All Nations
At the same time, the Hour of Sext recalls the revelation to Saint Peter that the salvation wrought by Christ upon the Cross is open to every nation on earth. “And Peter opening his mouth, said: In very deed I perceive, that God is not a respecter of persons. But in every nation, he that feareth him, and worketh justice, is acceptable to him.” (Acts 12:34-35)

None: The Blood and the Water
The Hour of None recalls the saving death of Jesus upon the Cross; it recalls His sacred side opened by the soldier’s lance, and the blood and water that flowed out from His pierced Heart. By celebrating the Hour of None, the Church has always kept the memorial of what modern devotions, building upon a tender medieval piety, rightly present as The Hour of Mercy.

Source of Healing
At the same time, the Hour of None recalls the healing of the crippled man by the Apostles Peter and John, that Saint Luke relates in the Acts of the Apostles:

Now Peter and John went up into the temple at the ninth hour of prayer. And a certain man who was lame from his mother’ s womb, was carried: whom they laid every day at the gate of the temple, which is called Beautiful, that he might ask alms of them that went into the temple. He, when he had seen Peter and John about to go into the temple, asked to receive an alms. But Peter with John fastening his eyes upon him, said: Look upon us. But he looked earnestly upon them, hoping that he should receive something of them. But Peter said: Silver and gold I have none; but what I have, I give thee: In the name of Jesus Christ of Nazareth, arise, and walk. And taking him by the right hand, he lifted him up, and forthwith his feet and soles received strength. And he leaping up, stood, and walked, and went in with them into the temple, walking, and leaping, and praising God. And all the people saw him walking and praising God. And they knew him, that it was he who sat begging alms at the Beautiful gate of the temple: and they were filled with wonder and amazement at that which had happened to him” (Acts 3:1-10).

Immense in Their Implications
The so-called Little Hours are immense in their implications for a truly Catholic piety. One who prays them daily, whether within the cloister, or amidst the noise and chaos of the world, will experience the healing effects of the Passion of Christ and the operations of the Holy Ghost who is, at every hour, active and working in the Church.