Skip to content
HomeBlessed Virgin MaryWhen anyone receiveth the name of abbot (II:3) 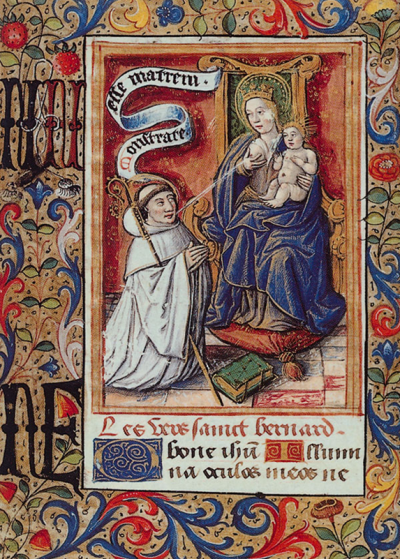 11 Jan. 12 May. 11 Sept.
Therefore, when anyone receiveth the name of Abbot, he ought to govern his disciples by a two-fold teaching: that is, he should shew forth all goodness and holiness by his deeds rather than his words: declaring to the intelligent among his disciples the commandments of the Lord by words: but to the hard-hearted and the simple minded setting forth the divine precepts by the example of his deeds. And let him shew by his own actions that those things ought not to be done which he has taught his disciples to be against the law of God; lest, while preaching to others, he should himself become a castaway, and God should say to him in his sin: “Why dost thou declare My justice, and take My covenant in thy mouth? Thou hast hated discipline, and hast cast My words behind thee.” And again: “Thou who sawest the mote in thy brother’s eye, didst thou not see the beam in thine own?”

Saint Benedict says that the name of abbot is received; it is not taken. The abbot is named so by his sons who, in faith, see Christ in him. The reverence shown in naming the abbot and the signs of respect paid him go to Christ. Such things foster a profound spirit of faith in the abbot and in the brethren. The authentic monastic spirit is endangered when, the abbot and brethren, fall into a superficial way of seeing, acting, and relating. The authentic monastic spirit, however, thrives when the abbot and brethren see all in the light of faith, and when their way of acting and relating to one another is ordered by the seven gifts of the Holy Ghost.

A monastery is not a merely human institution, nor is it an enterprise built up and operated according to the criteria of the world. A monastery is a manifestation of the living Body of Christ; it is a Eucharistic organism, vivified by the Holy Ghost, in which we, who partake daily of the one Body of the Lord, are joined to one another, member to member, and to Christ our Head, becoming with Him one single oblation to the Father. The Apostle says, “Now you are the body of Christ, and members of member”. Vos autem estis corpus Christi, et membra de membro (1 Corinthians 12:27).

Blessed Schuster often speaks of the courtesy and refinement of manners that ought to characterize a Benedictine monk; these qualities are an expression of reverence for the Body of Christ. If Saint Benedict says that even the vessels and goods of the Monastery are to be treated as the consecrated vessels of the altar (Chapter XXXI), with how much greater reverence ought we treat one another, who are temples of the Holy Ghost?

Or know you not, that your members are the temple of the Holy Ghost, who is in you, whom you have from God; and you are not your own? For you are bought with a great price. Glorify and bear God in your body. (1 Corinthians 6:19–20)

The abbot, true to the name given him, does not govern the monastery as a kind of executive administrator; Christ is the beginning and end of all that he teaches and does. The more an abbot is called upon to teach, the more must he make time and space in his life for silence before the Face of Christ. The more he is called upon to act, the more must he go humbly before Our Lord and, there, wait to be acted upon. The more he is obliged to meet with his sons and listen to their thoughts, the more must he go, like Moses to the Tent of Meeting. Herein lies the secret of a wise and fruitful government.

It is a good thing when the community sees the back of the abbot, that is, when they see him going to Our Lord, as Moses went into the tabernacle, to speak to Him on their behalf. I am learning, more and more, that the surest way to go to Our Lord is to direct my steps to His Immaculate Mother, the Tabernacle of the Most High. The hymn of the Acathist makes us sing: “Hail! tabernacle of God and the Word. Hail! holy beyond all holy ones. Hail! ark gilded by the Holy Ghost. Hail! unfailing treasure-house of life”. The abbot who has given himself, his monastery, and each of his sons to the Blessed Virgin Mary, and who exercises his office in filial dependence on her, will find that problems are more easily solved; that troubles are more quickly calmed; and that things thought impossible become possible.

The authentic monastic spirit is safeguarded by eschewing all that is worldly. The abbot is the first guardian of the enclosure of the monastery. He is the shepherd who must, at all times, be watchful lest wolves enter the enclosure, and wreak devastation upon his flock. What are these wolves? It is necessary that the abbot appoint a trusted Father to watch over the books and reviews made available in the library. The abbot, while trusting his monks, ought nonetheless to be aware of their correspondence and use of the internet. Mindful of the word of the Psalmist — “Set a watch, O Lord, before my mouth: and a door round about my lips” (Psalm 140:3) — he needs to be attentive to any contacts of his monks with the world.

The 17th century Maurist Benedictine, Dom Jean Mabillon (1632–1707), travelled throughout Europe, to Flanders, Switzerland, Germany, and Italy, in search of medieval manuscripts. This scholarly wanderlust was not without dangers. In today’s digital culture, one can travel abroad without leaving one’s desk. All that is worldly, things both good and evil, can enter the cloister with a click of the keyboard. The abbot has a grave obligation to be vigilant with regard to the electronic media through which invisible wolves can so easily slip into the sheepfold, make victims of the flock, and carry them off. By his teaching and by his own actions, the abbot must inculcate a love of that separation from the world that guarantees the solitude and silence without which no man can hear the Word of God and hold it in his heart. The abbot is responsible for what, in Chapter LXVII, Saint Benedict calls “the enclosure of the monastery”

The Monastery, however, ought if possible to be so constituted that all things necessary, such as water, a mill, and a garden, and the various crafts may be contained within it; so that there may be no need for the monks to wander abroad, for this is by no means expedient for their souls. And we wish this rule to be frequently read in the community, that none of the brethren may excuse himself on the plea of ignorance. (Chapter LXVII)

In Chapter IV Saint Benedict tells us that we are to make ourselves strangers to the ways of the world. Saeculi actibus se facere alienum. Saint John tells us what is worldly:

Saint Bernard, that abbot who shines among all abbots, describes the water of wisdom of which the abbot himself must drink deeply, and daily offer to his sons:

A monastery through which courses the chaste and peaceable water of wisdom will be a wholesome and joyful place, like the city of God that the Psalmist describes:

The stream of the river maketh the city of God joyful: the most High hath sanctified his own tabernacle. God is in the midst thereof, it shall not be moved: God will help it in the morning early. (Psalm 45:5–6)