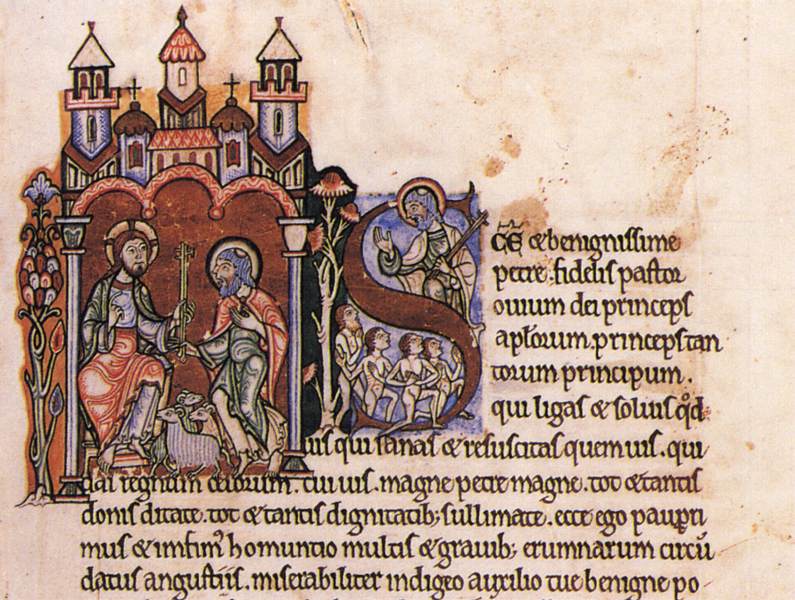 Let him so temper all things, that the strong may have something to strive after, and the weak nothing at which to take alarm. (Chapter LXIV)

CHAPTER LXIV. Of the Appointment of the Abbot
21 Apr. 21 Aug. 21 Dec.
Let him that hath been appointed Abbot always bear in mind what a burden he hath received, and to Whom he will have to give an account of his stewardship; and let him know that it beseemeth him more to profit his brethren than to preside over them. He must, therefore, be learned in the Law of God, that he may know whence to bring forth new things and old: he must be chaste, sober, merciful, ever preferring mercy to justice, that he himself may obtain mercy. Let him hate sin, and love the brethren. And even in his corrections, let him act with prudence, and not go too far, lest while he seeketh too eagerly to scrape off the rust, the vessel be broken. Let him keep his own frailty ever before his eyes, and remember that the bruised reed must not be broken. And by this we do not mean that he should suffer vices to grow up; but that prudently and with charity he should cut them off, in the way he shall see best for each, as we have already said; and let him study rather to be loved than feared. Let him not be violent nor over anxious, not exacting nor obstinate, not jealous nor prone to suspicion, or else he will never be at rest. In all his commands, whether concerning spiritual or temporal matters, let him be prudent and considerate. In the works which he imposeth, let him be discreet and moderate, bearing in mind the discretion of holy Jacob, when he said “If I cause my flocks to be overdriven, they will all perish in one day.” Taking, then, the testimonies, borne by these and the like words, to discretion, the mother of virtues, let him so temper all things, that the strong may have something to strive after, and the weak nothing at which to take alarm. And, especially, let him observe this present Rule in all things; so that, having faithfully fulfilled his stewardship, he may hear from the Lord what that good servant heard, who gave wheat to his fellow-servants in due season: “Amen, I say unto you, over all his goods shall he place him.”

Saint Anselm was born in 1033 in Aosta; three years after his mother’s death he entered the abbey of Notre Dame at Bec in Normandy, where, at the age of thirty, he replaced Lanfranc. Fifteen years later, in 1078, Anselm became abbot of Bec, and in 1093 he was named Archbishop of Canterbury, serving in this office until his death on 21 April 1109. The Prayers and Meditations of Saint Anselm, together with his Proslogion, a meditation on faith and understanding (fides quaerens intellectum), all date from the time of Saint Anselm’s tenure as Prior of Bec. You would, I think, know the celebrated opening verses of the Prosologion:

Today, I want to present to you Saint Anselm’s prayer to Saint Benedict. There is another prayer of his to which I shall return at some later time: his prayer for an abbot. Both prayers are quintessentially monastic in their language, their form, and their theology. You will recognise in Saint Anselm’s prayers many of the themes that Saint Aelred would take up in his Pastoral Prayer written about more than a half century later.

Holy and blessed Benedict,
the grace of heaven has made you rich
with such full blessing of goodness
not only in order to raise you to the glory you desire,
to the rest of the blessed, to a seat in heaven,
but that many others be drawn to that same blessedness,
wondering at your life,
stirred by your kind admonitions,
instructed by your gentle doctrine,
called on by your miracles.

Benedict, blessed of God,
whom God has blessed with such wide benediction,
to you I flee, in anguish of soul.
I fling myself down before you
with all the humility of mind possible;
I pour forth my prayer to you
with all the fervour possible;
and implore your help with all the desire possible;
for my need is too great; I cannot bear it.

For I profess to lead a life
of continual turning to God,
as I promised by taking the name and habit of a monk;
but my long life cries out against me
and my conscience convicts me,
as a liar to God, to angels, and to men.

Holy Father Benedict
hear what I ask of you;
and I beg you not to be scandalized
by so many faults and such deceit,
but hear what I acknowledge before you,
and have more pity on my sorrows than I deserve.

At least, peerless leader
among the great leaders of the army of Christ,
you have pledged me to serve under your leadership,
however feeble a soldier;
you have placed me under your tutorship,
however ignorant a pupil;
I have vowed to live according to your Rule,
however carnal a monk.
My perverse heart is dry and as cold as a stone
when it comes to deploring the sins I have committed;
but when it comes to resisting occasions of sin
it is indeed pliant and soon defiled.

My depraved mind is swift and untiring
to study what is useless and vile;
but even to think of what is for its good
makes it weary and stupid.

My blind and distorted soul is swift and prompt
to throw itself into vices and wallow in them,
but how slowly and with what difficulty
do I even call to mind the virtues.

It would take too long, dearest Father,
to recall each thing separately.
It would be too long a story to tell
of all the gluttony, sloth, inconstancy, impatience,
vainglory, detraction, disobedience,
and all the other sins which my wretched soul commits,
deriding me each day.

See then, blessed Benedict,
how bravely fights this soldier
who is under your leadership;
see how much progress your pupil is making
in your school;
see what a marvellous monk this is,
dead to sin and the desires of the flesh,
fervent and living only for virtue!
No, you see rather a false monk, lost to all virtue,
dominated by a crowd of vices,
burdened with a weight of sin.

For shame! Shameless monk that I am!
How dare I call myself a soldier of Christ
and a disciple of St Benedict?
False to my profession,
how have I the effrontery to let people see me
with the tonsure and habit of profession
when I do not live the life?

Alas, ‘anguish closes me in on every side,’
for if I deny my sovereign king,
my good teacher and my profession,
it is death to me;
but if I profess myself a soldier, scholar, monk,
my life argues that I am a liar
and I am judged thereby.

‘Faint within me, my spirit; be appalled, my heart;
break forth and cry, O my soul.’
Jesus, good Lord,
‘consider my affliction and my trouble
and forgive me all my sins.’
‘Hear, 0 Lord, do not cast me off or forsake me’,
but ‘lead me and help me to do your will’,
so that my life may attest
what my heart and mouth confess so freely.
‘Hear the voice of my prayer, my King and my God,’
by the merits and intercession of holy Benedict,
your dear friend, my master, and my leader.

And you, my good leader, my gentle master,
my dear father, blessed Benedict –
I pray and beseech you,
by the mercy you have shown to others
and by the mercy that God has shown to you,
have compassion on me in my misery,
for I rejoice with you in your bliss.

Lift up him who is cast down, strengthen the wavering,
prepare the helpless with spiritual weapons of virtue,
lead and protect him who is fighting in the battle.
Bring me to the victory and lead me to the crown.

Do this, advocate of monks, of that charity
which you were so anxious for us to take
as our rule of life.
Make it your care that we may be sufficiently willing
and effectively able to do whatever we ought;
so that both you, on account of our discipleship,
and we, on account of your leadership,
may glory before the face of God
who lives and reigns for ever and ever. Amen.