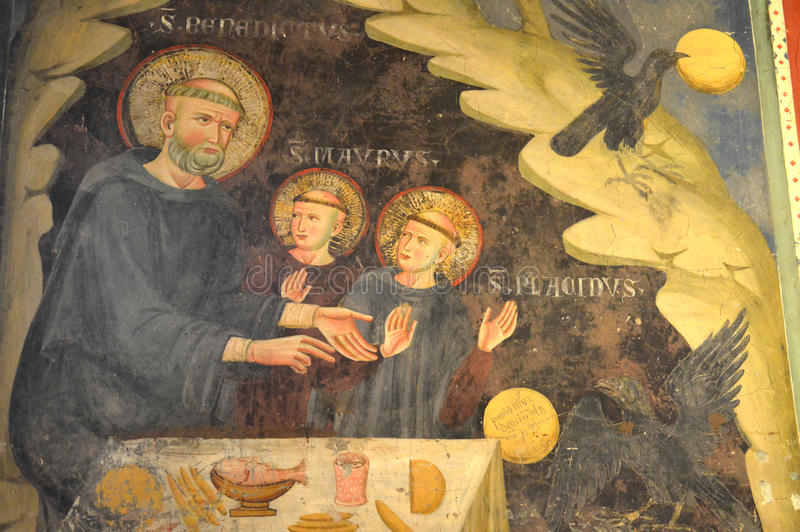 Saint Benedict warns the abbot against being prone to suspicion, adding “or else he will never be at rest”. The abbot is not a despot living in fear of plots and disloyal machinations against himself. He is a father to whom his sons freely and honestly open their hearts. The suspicious man assumes the worst of everyone, trusts no one, and habitually interprets the words and gestures of others in a negative way. The suspicious man falls frequently into sins of rash judgment. Suspiciousness is the fertile ground in which thrive sins of censoriousness, inquisitiveness into the lives of others, and false assumptions. The abbot will dispel temptations to suspicion in two ways, first by quieting his own heart in prayer, and second by keeping open the channels of communication between himself and each of his sons. He will frequently go before Our Lord in prayer, saying:

Be thou, O my soul, subject to God: for from him is my patience. For he is my God and my saviour: he is my helper, I shall not be moved. In God is my salvation and my glory: he is the God of my help, and my hope is in God. Trust in him, all ye congregation of people: pour out your hearts before him. God is our helper for ever. (Psalm 61:6–9)

The abbot will recognise the devil’s manoeuvres in every temptation to be suspicious of others, always presuming that his sons act in good faith. Should the contrary be found out and proved beyond any doubt, the abbot will, even then, correct the wayward brother with a merciful benevolence. If the brother does not respond to mild paternal corrections, the abbot may be obliged to intervene more vigorously, but even this he will do with restraint, lest, as Saint Benedict says in this same chapter, “while he seeketh too eagerly to scrape off the rust, the vessel be broken”.

Saint Benedict would have the abbot distinguish himself in the practice of four virtues: he is, in all things, to think, act, and speak with prudence and consideration, with discretion and moderation.

In all his commands, whether concerning spiritual or temporal matters, let him be prudent and considerate. In the works which he imposeth, let him be discreet and moderate.

This means that the abbot must not not be hasty in his judgments, but bide his time, until he sees things with a vision unclouded by his own emotions. The abbot must not command a a brother to do anything, be it spiritual or temporal, until he is at peace with the rightness of what he commands. He must take into consideration a brother’s “infirmities, whether of body or of mind” (Chapter LXXII) and not lay on any brother burdens too heavy to bear. He must fit the work to the brother and not force a brother to fit himself to the work, unless he perceives that a brother will benefit from being obliged to stretch himself, undertake new things, and so attain a new level of fruitfulness and joy in the service of God and of his brethren.

It is normal that young brothers, especially postulants and novices, be commanded to undertake things that they are unaccustomed to doing. One does not come to the monastery to be cozily cocooned in one’s comfort zone, and to continue doing the things that one did in the world, and nothing more. The abbot must foster the growth of all the brethren in a spirit of detachment from self, ready obedience, and generous service. He does this, all the same, with care and moderation. Great harm can be done to a brother by asking him to undertake too much too soon; on the other hand, an equally great harm can be done to a brother but not asking enough of him, and by allowing him to write his own ticket by doing only the things he likes to do, refusing to do things that he finds uninteresting and fatiguing, and following his own fancies and enthusiasms. The abbot must, at all times, keep in view the growth of the individual brother and of the whole body of the monastery; this will oblige him to say no to many things. The brethren will keep in mind that when the abbot says no, it is in view of a greater good.