Skip to content
HomeLectio DivinaOf the Discipline of receiving Brethren into Religion (LVIII:1) 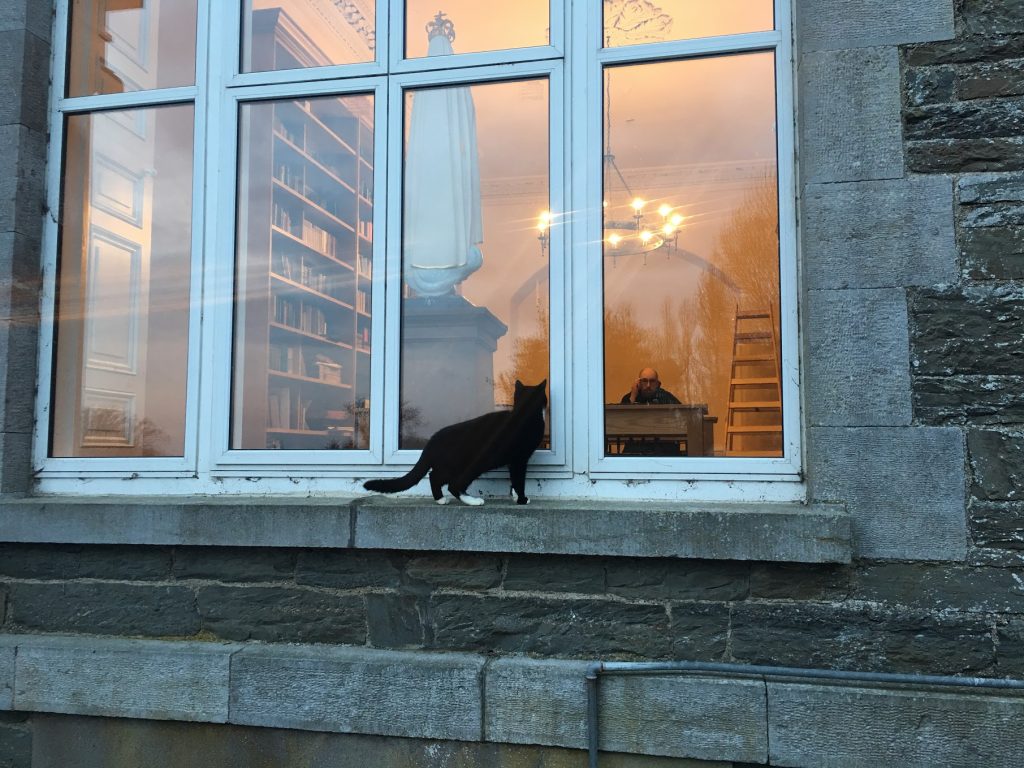 CHAPTER LVIII. Of the Discipline of receiving Brethren into Religion
11 Apr. 11 Aug. 11 Dec.
To him that newly cometh to change his life, let not an easy entrance be granted, but, as the Apostle saith, “Try the spirits if they be of God.” If, therefore, he that cometh persevere in knocking, and after four or five days seem patiently to endure the wrongs done to him and the difficulty made about his coming in, and to persist in his petition, let entrance be granted him, and let him be in the guest-house for a few days. Afterwards let him go into the Novitiate, where he is to meditate and study, to take his meals and to sleep.

The novice is to meditate. Saint Benedict’s meditation is not what later authors call meditation. The meditation of a Benedictine monk is not that of a Carmelite, a Jesuit, or a Sulpician. It is not applying oneself to reflect on a particular subject systematically, to think holy thoughts about it, turn it to prayer, and conclude with a resolution followed up by one or two examinations of conscience later in the day. These things are not in any way wrong nor are they excluded altogether from monastic practice. There is evidence of this sort of meditation in the writings of the admirable Camaldolese reformer Blessed Paolo Giustianiani (1476-1528) and in those of Abbot Blosius (1506—1566). The ancient definition and practice of meditation, however, is not what later generations came to understand by the term. Dom Jean Leclercq addresses this in his classic, The Love of Learning and the Desire for God: A Study of Monastic Culture, which book is, I must add, obligatory reading for novices. Dom Leclercq says:

For the ancients, to meditate is to read a text and to learn it “by heart” in the fullest sense of this expression, that is, with one’s whole being: with the body, since the mouth pronounced it, with the memory which fixes it, with the intelligence which understands its meaning, and with the will which desires to put it into practice. (Dom Jean Leclercq, The Love of Learning and the Desire for God: A Study of Monastic Culture)

In the Middle Ages, as in antiquity, they read usually, not as today, principally with the eyes, but with the lips, pronouncing what they saw, and with the ears, listening to the words pronounced. hearing what is called the “voices of the pages.” It is a real acoustical reading.  (The Love of Learning and the Desire for God: A Study of Monastic Culture)

It may not always be possible to read aloud; one can, nonetheless, form the words with one’s lips, and read in such a way that one is not merely running one’s eyes over a page, but really receiving each word. In this way one can hear the voices of the pages. Meditation has to do not, primarily, with text, but with the word. The word is living; it is communicated bodily from mouth to ear, and then from ear to the mind, and finally from the mind to the heart before returning whence it came, borne aloft on the wings of prayer.

So shall my word be, which shall go forth from my mouth: it shall not return to me void, but it shall do whatsoever I please, and shall prosper in the things for which I sent it. (Isaias 55:11)

In 1989, Joseph Cardinal Ratzinger, Prefect of the Congregation for the Doctrine of the Faith, addressed a letter to all the bishops of the Catholic Church on “some aspects of Christian meditation”. This letter is also required reading; it clarifies a number of ambiguities and misapprehensions surrounding  the subject of meditation. Cardinal Ratzinger began by grounding all Christian meditation in the psalms. He writes:

The Bible itself teaches how the man who welcomes biblical revelation should pray. In the Old Testament there is a marvelous collection of prayers which have continued to live through the centuries, even within the Church of Jesus Christ, where they have become the basis of its official prayer: The Book of Praises or of Psalms. Prayers similar to the Psalms may also be found in earlier Old Testament texts or re-echoed in later ones. The prayers of the book of Psalms tell in the first place of God’s great works on behalf of the Chosen People. Israel meditates, contemplates and makes the marvels of God present again, recalling them in prayer.

Cardinal Ratzinger’s letter is, as one would expect, in perfect harmony with the original Benedictine understanding and pratice of meditation. In Chapter VIII, “On the Divine Office at Night”, Saint Benedict says:

And let the time that remains after the Night-Office be spent in study (meditation) by those brethren who have still some part of the Psalter and lessons to learn.

One understands why Abbot Hunter–Blair thought it necessary to expand Saint Benedict’s meditent into “meditate and study”. Saint Benedict presents meditation as a practical preparation for the Divine Office. Meditation is ordered to the Opus Dei; it is, in effect, an application to the text of the Psalter — one psalm after another — until one becomes so familiar with the psalms that they rise easily from the heart’s memory to the lips, becoming as Saint John Cassian says in Conference X, the true expression of one’s own prayer:

He will take in to himself all the thoughts of the Psalms and will begin to sing them in such a way that he will utter them with the deepest emotion of heart not as if they were the compositions of the Psalmist, but rather as if they were his own utterances and his very own prayer; and will certainly take them as aimed at himself, and will recognize that their words were not only fulfilled formerly by or in the person of the prophet, but that they are fulfilled and carried out daily in his own case. For then the Holy Scriptures lie open to us with greater clearness and as it were their very veins and marrow are exposed, when our experience not only perceives but actually anticipates their meaning, and the sense of the words is revealed to us not by an exposition of them but by practical proof. For if we have experience of the very state of mind in which each Psalm was sung and written, we become like their authors and anticipate the meaning rather than follow it, i.e., gathering the force of the words before we really know them, we remember what has happened to us, and what is happening in daily assaults when the thoughts of them come over us, and while we sing them we call to mind all that our carelessness has brought upon us, or our earnestness has secured, or Divine Providence has granted or the promptings of the foe have deprived us of, or slippery and subtle forgetfulness has carried off, or human weakness has brought about, or thoughtless ignorance has cheated us of. For all these feelings we find expressed in the Psalms so that by seeing whatever happens as in a very clear mirror we understand it better, and so instructed by our feelings as our teachers we lay hold of it as something not merely heard but actually seen, and, as if it were not committed to memory, but implanted in the very nature of things, we are affected from the very bottom of the heart, so that we get at its meaning not by reading the text but by experience anticipating it. (Conferences X:11)