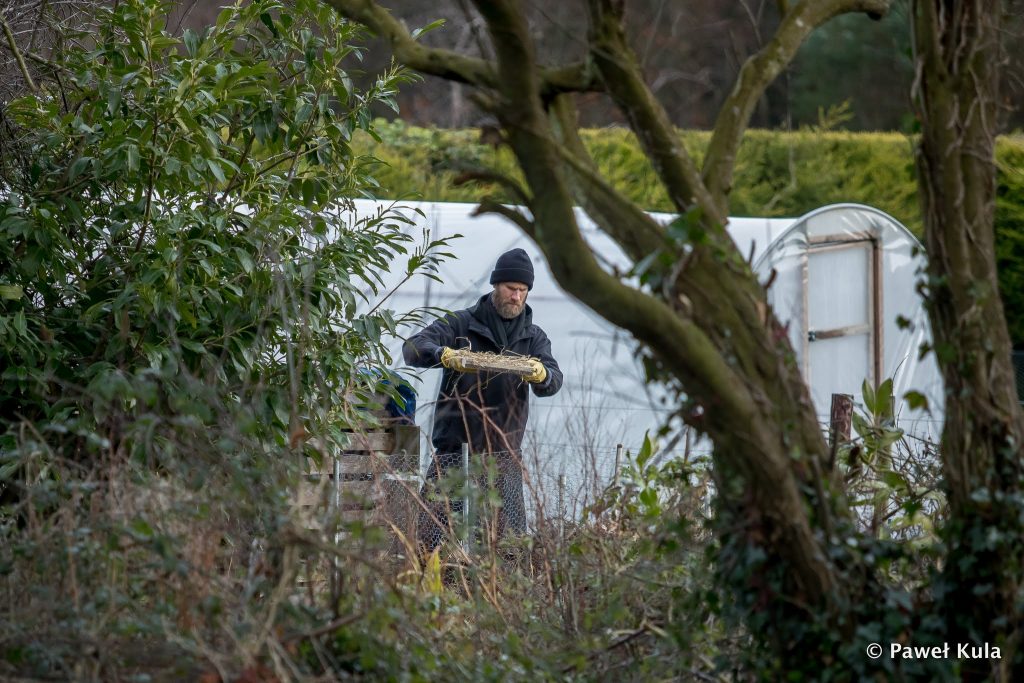 1 Feb. 2 June. 2 Oct.
The fourth degree of humility is, that if in this very obedience hard and contrary things, nay even injuries, are done to him, he should embrace them patiently with a quiet conscience, and not grow weary or give in, as the Scripture saith: “He that shall persevere to the end shall be saved.” And again: “Let thy heart be comforted, and wait for the Lord.” And shewing how the faithful man ought to bear all things, however contrary, for the Lord, it saith in the person of the afflicted: “For Thee we suffer death all the day long; we are esteemed as sheep for the slaughter.” And secure in their hope of the divine reward, they go on with joy, saying: “But in all these things we overcome, through Him Who hath loved us.” And so in another place Scripture saith: “Thou hast proved us, O God; Thou hast tried us as silver is tried by fire; Thou hast led us into the snare, and hast laid tribulation on our backs.” And in order to shew that we ought to be under a superior, it goes on to say: “Thou hast placed men over our heads.” Moreover, fulfilling the precept of the Lord by patience in adversities and injuries, they who are struck on one cheek offer the other: to him who taketh away their coat they leave also their cloak; and being forced to walk one mile, they go two. With Paul the Apostle, they bear with false brethren, and bless those that curse them.

For Saint Benedict, and for the fathers before him, perseverance in obedience to one’s superiors and to one’s brethren is a kind of daily martyrdom. In the martyrdom of the monk, there is no shedding of blood, but there is the shedding of one’s personal preferences in favour of what is commanded by the abbot, or enjoined by the common rule of the monastery, or dictated by charity. The author of the Imitation of Christ, that book so esteemed by the Maurist Benedictines of the 17th century, says this:

If you wish peace and concord with others, you must learn to break your will in many things. To live in monasteries or religious communities, to remain there without complaint, and to persevere faithfully till death is no small matter. Here no man can remain unless he desires with all his heart to humble himself before God. (Imitation of Christ, Book I, Chapter 17)

It sometimes happens that young brothers fantasise about being elsewhere: in a remote cloister where all is silent and orderly; where there are rigorous fasts and perpetual abstinence; where one wears the hair shirt and sleeps on hard boards; where every liturgical rubric is carried out perfectly; where the psalmody is always flawless; where one is never troubled by intrusive requests; where one can close the door of one’s cell and give oneself over to pursuits of one’s own choice. Such fantasies are dangerous and delusional. The same brothers who indulge in such reveries may have difficulty bearing with small annoyances; they get their hackles up when disturbed. Such brothers aspire after a more perfect life and, at the same time, neglect what is ordinary and quotidian: keeping the cell clean and in good order; obeying promptly at the sound of the bell; offering others the alms of a fraternal smile in every encounter. There is a saying from the Fathers that is precious for its wisdom and discernment:

If temptation comes upon you in the place where you live, do not leave the place at the time of temptation, or wherever you go, you will find what you fled.

It is not uncommon in the first seasons of one’s monastic life to be tempted simultaneously against stability and obedience. Deceived by the devil, the young monk begins to reason: “I cannot obey here, but, I would be, oh, so obedient there. I cannot obey this abbot of mine, but if the learned and virtuous Father So–and–So were my abbot, I would obey him with pleasure. Obedience is difficult here because of the weaknesses of the brethren and the abbot’s want of firmness. Or obedience is difficult here because the architecture is unattractive, or the chant is fatiguing, or the food is not to my taste, or the abbot’s instructions are not clear enough, or there is too much work, or not enough time for prayer, or too much time in choir, or not enough time for work”. The brother who begins to entertain such thoughts, holding conversations with his thoughts, and taking mental holidays outside the enclosure, will soon fall into spiritual pride, or anger, or into the restlessness that is one of the chief symptoms of acedia.

The antidote for such thoughts is to renew frequently, with great unfelt acts of faith and hope, one’s vows of stability and obedience, and this in the presence of the Most Blessed Sacrament. Our Lord communicates graces of stability and obedience to the man who anchors himself before the Host. At certain seasons and hours every monk, like Jacob, wrestles with an Angel in the night:

And he was left there alone. And there one appeared to him who wrestled with him until the day broke. At last, finding that he could not get the better of Jacob, he touched the sinew of his thigh, which all at once withered; then he said, Let me go, the dawn is up. But Jacob answered, I will not let thee go until thou givest me thy blessing. (Genesis 32:24–26)

Psalm 36 is particularly effective in this combat:

Blessed Schuster says that the Church canonised Saint Thérèse of the Child Jesus and Saint Gabriel dell’Addolorata for the faithful fulfillment of their duties in the cloister, for their heroic perseverance in the little things that make up one monastic day after another. Blessed Schuster notes that these two young saints lived but a short time in the cloister. Neither of them did anything extraordinary. Communia sed non communiter. Common things, but in an uncommon way. This is heroic virtue; it is unseen. “Thy Father who seeth in secret”, says Our Lord, “will repay thee” (Matthew 6:4).