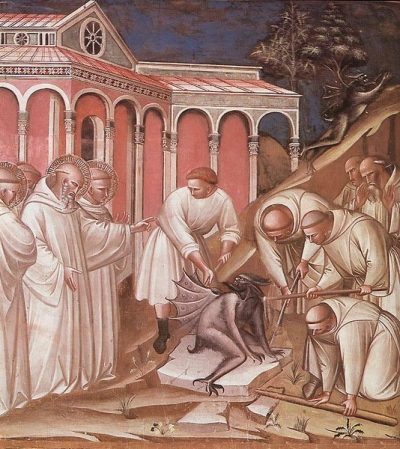 Let every occasion of presumption be banished from the Monastery. We ordain, therefore, that no one be allowed to excommunicate or strike any of his brethren, unless authority to do so shall have been given him by the Abbot. Let such as offend herein be rebuked in the presence of all, that the rest may be struck with fear. With regard to the children, however, let them be kept by all under diligent and watchful discipline, until their fifteenth year: yet this, too, with measure and discretion. For if any one presume, without leave of the Abbot, to chastise such as are above that age, or shew undue severity even to the children, he shall be subjected to the discipline of the Rule, because it is written: “What thou wouldest not have done to thyself, do not thou to another.”

The Benedictine exercise of authority is characterised in this chapter by four qualities: 1) diligence, 2) vigilance, 3) measure, and 4) discretion.

Diligence is the quality of taking great care with one’s work. The diligent man does things conscientiously, thoroughly, and meticulously. He does not leave jobs half–done nor does he neglect anything entrusted to him. The diligent man takes his responsibilities seriously. He is faithful in little things.

Vigilance is the quality of being watchful and alert. The vigilant man is not passive. He is alert and always ready to spring into action when circumstances require it.

Let your loins be girt, and lamps burning in your hands. And you yourselves like to men who wait for their lord, when he shall return from the wedding; that when he cometh and knocketh, they may open to him immediately. Blessed are those servants, whom the Lord when he cometh, shall find watching. Amen I say to you, that he will gird himself, and make them sit down to meat, and passing will minister unto them. (Luke 12:35–36)

Measure is characteristic of Benedictine holiness. Measure accounts, I think, for what many perceive as the beauty of Benedictine life. Saint Thomas relates measure to the virtue of temperance, and he shows that beauty proceeds from what he calls “a certain moderate and fitting proportion”. Is this why Benedictine life has about it something of a rhythmic musical quality? Saint Benedict would have all things be done with measure and at the proper time: eating, drinking, work, reading, and even choral prayer are all characterised by “a certain moderate and fitting proportion”.

Discretion fosters and orders all other virtues. The true son of Saint Benedict avoids all exaggeration. In one direction, exaggeration leads to laxity and lukewarmness; in the other direction, it leads to rigidity and exhaustion. Saint John Cassian teaches that discretion is the virtue

. . . by means of which one may ascend with less weariness to the extreme summit of perfection, and without which even those who toil most willingly cannot reach the heights of perfection. For discretion is the mother of all virtues, as well as their guardian and regulator. (Cassian, Second Conference of Abbot Moses, Chapter 4)

Chapter LXX ends with a variation on the very words of Our Lord:

All things therefore whatsoever you would that men should do to you, do you also to them. For this is the law and the prophets. (Matthew 7:12)