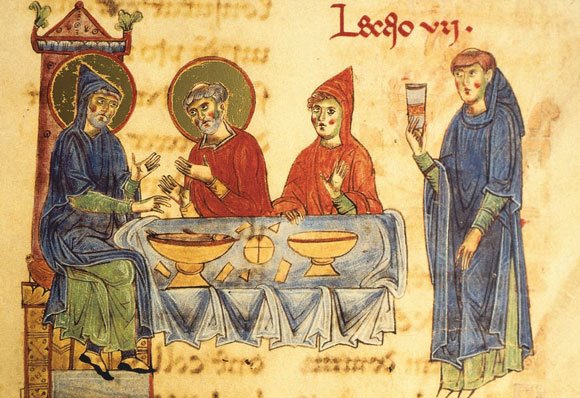 We foresee, therefore, that it is expedient for the preservation of peace and charity, that the ordering of the Monastery depend upon the will of the Abbot. If possible, let all the affairs of the Monastery be attended to (as we have already arranged) by Deans, as the Abbot shall appoint; so that, the same office being shared by many, no one may become proud. But if the needs of the place require it, and the community ask for it reasonably and with humility, and the Abbot judge it expedient, let him himself appoint a Prior, whomsoever he shall choose with the counsel of brethren who fear God. Let the Prior reverently do whatever is enjoined him by his Abbot, and nothing against his will or command; for the more he is raised above the rest, so much the more carefully ought he to observe the precepts of the Rule. And if the Prior be found culpable or deceived by the haughtiness of pride, or be proved a contemner of the holy Rule, let him be admonished by words until the fourth time, and then let the correction of regular discipline be applied to him. But if even then he do not amend, let him be deposed from the office of Prior, and another, who is worthier, be substituted in his place. If afterwards he be not quiet and obedient in the community, let him be expelled from the Monastery. Nevertheless, let the Abbot bear in mind that he must give an account to God of all his judgments, lest perchance the flame of envy or jealousy be kindled in his soul.

Although Saint Benedict, in this chapter, treats of the provost or second–in–command of the monastery, at a deeper level, the whole chapter reveals the things that the saint considers most important in our life together. His primary concern, his principal motivation is “the preservation of peace and charity”. . . propter pacis caritatisque custodiam. Peace and charity are divine gifts that descend from above “from the Father of lights” (James 1:17), but we are the custodians of the gifts. Ours it is to keep and cultivate them. If a Benedictine monastery is not the abode of peace and charity, it ought to close its doors.

The pax benedictina is not a peace constructed by men; it is the peace of the risen Christ. It is the peace that radiates from the Sacred Host. It is His gift given freely, received humbly, cherished joyfully. “Now when it was late that same day, the first of the week, and the doors were shut, where the disciples were gathered together, for fear of the Jews, Jesus came and stood in the midst, and said to them: Peace be to you.” (John 20:19). Jesus remains in our midst in the Most Holy Sacrament of the Altar and He continues to say to all who approach Him there, “Peace be to you”.

So long as we are faithful to our life of adoration, we will have the peace that the world cannot give. “Peace I leave with you, my peace I give unto you: not as the world giveth, do I give unto you. Let not your heart be troubled, nor let it be afraid” (John 14:27). We are, nonetheless, responsible for the preservation of Our Lord’s gift of peace. How do we preserve the peace that is offered us from the altar day after day?