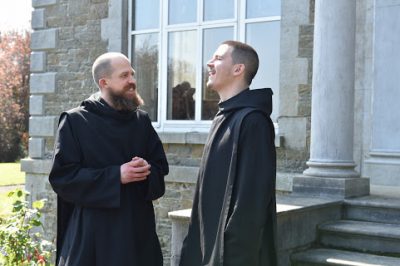 CHAPTER LXIX. That no one presume to defend another in the Monastery
27 Apr. 27 Aug. 27 Dec.

Care must be taken that on no occasion one monk presume to defend another in the Monastery, or to take his part, even although they be connected by some near tie of kinship. Let not the monks dare to do this in any way whatsoever; because therefrom may arise the most grievous occasion of scandals. If any one transgress this rule, let him be very severely punished.

Here, then, is one who wears chains in the Lord’s service, pleading with you to live as befits men called to such a vocation as yours. You must be always humble, always gentle; patient, too, in bearing with one another’s faults, as charity bids; eager to preserve that unity the Spirit gives you, whose bond is peace. (Ephesians 4:1–3)

The devil seeks, by every means,to destroy the unity of the monastic family by setting brother against brother, by fomenting unhealthy attachments and, especially, by suggesting that one is the object of injustice, persecution, and disaffection. Even in a community of men, the emotional component of interpersonal relationships can become messy. This is the case, notably, when one brother begins to think, “Ah, yes, Father Prior is unreasonably critical of Brother Philadelphus. It is clear that Father Prior neither likes nor appreciates Brother Philadelphus. I must defend Brother Philadelphus against Father Prior’s corrections and injustices.” Or again, one brother may think, “It is clear that Father Prior favours Brother Willibald over Brother Samson. He gives to one the permissions that he withholds from another. He is too indulgent with Brother Willibald and too strict with Brother Samson. I shall set things right by taking poor Brother Samson’s side.” Such thinking foments divisions, intrigue, resentment, and disobedience. The Apostle says:

Yes, brethren, freedom claimed you when you were called. Only, do not let this freedom give a foothold to corrupt nature; you must be servants still, serving one another in a spirit of charity. After all, the whole of the law is summed up in one phrase, Thou shalt love thy neighbour as thyself; if you are always backbiting and worrying each other, it is to be feared you will wear each other out in the end. Let me say this; learn to live and move in the spirit; then there is no danger of your giving way to the impulses of corrupt nature (Galatians 5:13–15)

In Saint Benedict’s day, as in certain cultures today, loyalty to one’s extended family, tribe, clan, or place of origin constituted a powerful force in society. Saint Benedict makes it clear in this chapter, that a man leaves all such attachments behind when he enters the monastery. The novice must learn to live a challenging, and sometimes, bewildering configuration of relationships in his new monastic family. In Chapter LXXII, Saint Benedict will say, “Let them most patiently endure one another’s infirmities, whether of body or of mind.”  As new men arrive from various backgrounds and cultures, even the professed monk must constantly adapt to the ever–changing composition of his growing monastic family, seeing in each new brother one sent by Christ. In the same Chapter LXXII, our holy patriarch will add, “Let them cherish fraternal charity with chaste love, fear God, love their Abbot with sincere and humble affection, and prefer nothing whatever to Christ.”

The choir, the refectory, and recreation are three places in which a monk may be tempted against charity. These are precisely the three venues in which we are called to manifest charity in unity. One must learn to disarm the hateful suggestions of the devil and to combat every poisonous thought against charity. This spiritual combat is the price of our unity. I shall never tire of repeating to you that charity makes for unity, and unity is what makes a monastery fruitful. The tragic sterility of so many monasteries can, in nearly every instance, be traced back to a breakdown in fraternal charity. Thus, does Saint John say, ”

This, then, is how God’s children and the devil’s children are known apart. A man cannot trace his origin from God if he does not live right, if he does not love his brethren. To love one another; that, from the first, was the charge given to you; (1 John 3:10–11)

The source of charity, the source of all virtue is prayer. The monk who withdraws from the beautiful struggle of prayer will soon find himself without the supernatural resources—grace—that fraternal charity requires.