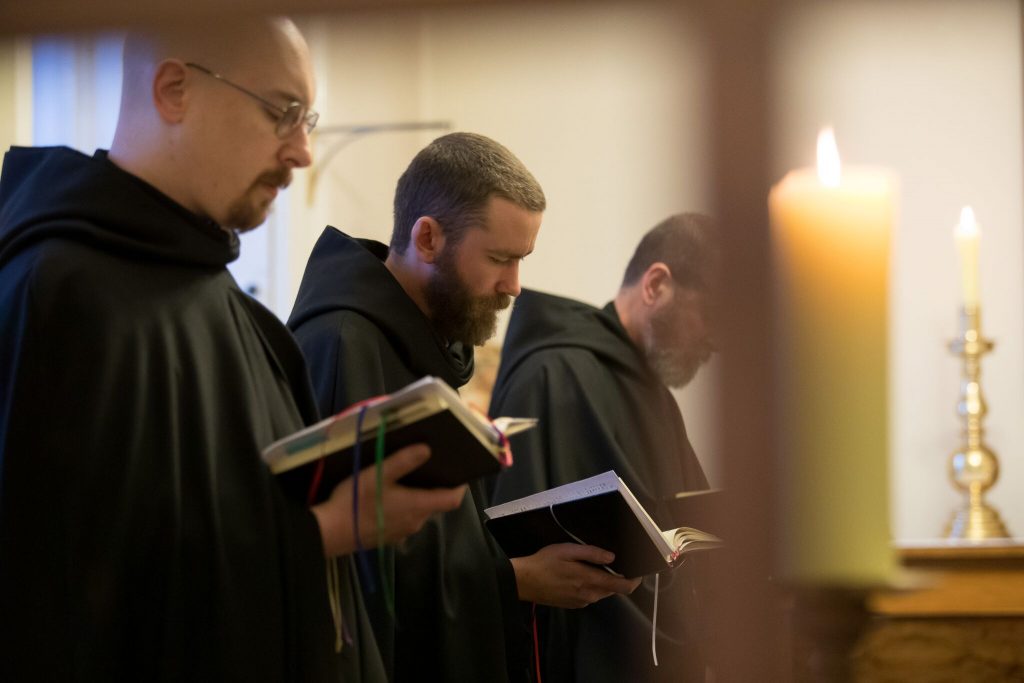 Let the Oratory be what it is called, a place of prayer: and let nothing else be done, or kept there. When the Work of God is ended, let all go out with the utmost silence, paying due reverence to God, so that a brother, who perchance wishes to pray by himself, may not be hindered by another’s misconduct. If any one desire to pray in private, let him go in quietly and pray, not with a loud voice, but with tears and fervour of heart. And let it not be permitted, as we have said, to remain in the Oratory when the Work of God is finished, except it be for a like purpose, lest hindrance be caused to others.

Saint Benedict derives a good part of the present chapter from the Rule of Saint Augustine, in which we read:

In the Oratory no one should do anything other than that for which it was intended and from which it also takes its name. Consequently, if there are some who might wish to pray there during their free time, even outside the hours appointed, they should not be hindered by those who think something else must be done there. (Rule of Saint Augustine 2:2)

Inspired by the Bishop of Hippo, Saint Benedict begins his treatment of the Oratory of the monastery by breaking with the practice of Egyptian monasticism.  In the monasteries of Egypt, while one of the Fathers chanted psalms, the others responded with a short refrain, working all the while at the weaving of baskets and of mats so as not to give way to sleep. The Egyptian Oratory resembled a large open work–room; it would have contained stacks of reeds and date–palm leaves as well as buckets of water in which to soak the materials so as to soften them.

Marked by his Roman culture, Saint Benedict was incapable of such an approach to the worship of the Divine Majesty. Saint Benedict’s canonical situation was, moreover, different from that of the Egyptian Fathers. Saint Benedict and his sons celebrated the Opus Dei in churches solemnly consecrated by the bishop. These churches had an altar in which relics of the saints rested, sacred images, and, as we know from Chapters IX and XI, seating for the choir. For Saint Benedict, it was inconceivable to have a kind of multi–purpose space for prayer, and to use the Oratory of the monastery as a workshop or store–room would have seemed to him a sacrilege.

In the Oratory, Saint Benedict would have his sons conduct themselves with profound respect and with reverence for the presence of God and of His holy Angels. The psalmody was to be executed with skill and with devotion:

Therefore let us consider how we ought to behave ourselves in the presence of God and of His angels, and so assist at the Divine Office, that our mind and our voice may accord together. (Chapter XIX)

Saint Augustine says, “Think over in your hearts the words that come from your lips” (Rule of Saint Augustine 2:2). Saint Benedict expresses the same idea somewhat differently: “Let us so assist at the Divine Office, that our mind and our voice may accord together”. The Benedictine Oratory is a place of profound silence and adoration, not only during the Hours of the Opus Dei, but even outside the times consecrated to liturgical prayer: “When the Work of God is ended, let all go out with the utmost silence, paying due reverence to God” (Chapter XLII).

A monk may remain in the Oratory outside of time of the Divine Office, provided that he pray quietly, without raising his voice in loud exclamations or dramatic sighs. An adoring silence characterises Benedictine solitary prayer. One who violates this silence is to be excluded from the Oratory. There is a story about this second kind of Benedictine prayer—Saint Benedict calls it secret or mystical prayer: secretius orare— in Chapter IV of the Second Book of the Dialogues:

In one of the monasteries which he had built in those parts, there was a monk who could not continue at prayers; for when the other monks knelt down to serve God, his manner was to go forth, and there with wandering mind to busy himself about some earthly and transitory things. When he had often been admonished by his Abbot for this fault without any amendment, at length he was sent to the man of God, who likewise very much rebuked him for his folly. Notwithstanding, returning to his monastery, he followed the holy man’s admonition; but, on the third day, he fell again to his old custom, and would not stay within at the time of prayer.  Word was once more sent to the man of God, by the father of the Abbey he had appointed there.

Benedict returned the answer that he would come himself, and reform what was amiss, which he did accordingly. It so fell out, that when the singing of psalms was ended, and the hour come in which the monks took themselves to prayer, the holy man perceived that the monk, who used at that time to go forth, was drawn out by the skirt of his garment by a little black boy.  On seeing this, he spoke secretly to Pompeianus, father of the Abbey, and also to Maurus saying, “Do you not see who it is, that draws this monk from his prayers?” and they answered him, that they did not. “Then let us pray to God,” he said, “that you also may behold whom this monk follows.” After two days Maurus saw him, but Pompeianus could not.

On another day, when the man of God had ended his devotions, he went out of the oratory, where he found the foresaid monk standing idle. For the blindness of his heart he struck with a little wand, and from that day forward he was so freed from all allurement of the little black boy, that he remained quietly at his prayers, as the other monks did. The old enemy was so terrified, that he dare not suggest any such thoughts again. As though by that blow, not the monk, but the devil himself had been struck.

The one thing the devil seeks above all else is get a monk to forsake prayer. The devil can and does tempt monks against purity, obedience, stability, silence, and all the other virtues, but his chief strategy is to draw a monk away from prayer. The monk who stops praying closes his soul to divine grace and opens himself to every manner of temptation. The devil especially fears a monk’s secret prayer because secret prayer is the subterranean stream that irrigates liturgical prayer and makes it wonderfully fruitful.

Saint Benedict describes the qualities of secret prayer in Chapter XX of the Holy Rule:

Let us remember that not for our much speaking, but for our purity of heart and tears of compunction shall we be heard. Our prayer, therefore, ought to be short and pure, except it be perchance prolonged by the inspiration of Divine Grace. 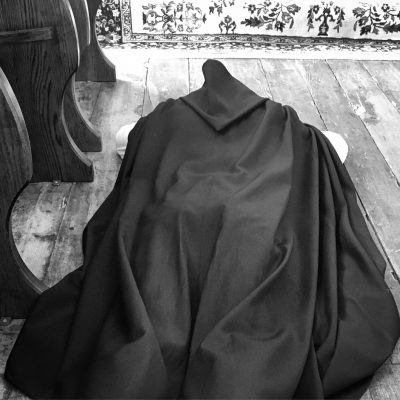 Saint Benedict recognises that some of his monks may, in fact, have the gift of prolonging their secret prayer in watches of adoration and in stillness before the altar. The Holy Patriarch himself was familiar with this kind of prayer, for Saint Gregory, describing Saint Benedict’s mystical experience, says:

The inward light which was in his soul ravished the mind of the beholder to supernatural things  and showed him how small all earthly things are. (Second Book of the Dialogues, Chapter 35)

In Benedictine life, secret prayer is the necessary and indispensable complement of choral prayer and of lectio divina. Without the experience of silent adoration of the Divine Majesty, or of confident, filial conversation with God, or of simple resting in the radiance of the Face of Christ, close to to His Heart, the hours spent in choral prayer can become tedious and, little by little, lose something of their vitality. Precisely because a Benedictine monk is bound to prolonged liturgical prayer in choir, he absolutely needs the balance assured by secret prayer, by a daily seeking of the divine intimacy.

It is said in an antiphon of the Office of Saint Gertrude that Our Lord spoke to her as He did to Moses. “And the Lord spoke to Moses face to face, as a man is wont to speak to his friend” (Exodus 33:10). This may not describe the ordinary experience of every monk, but it must be the object of every monk’s desire. When a monk goes to silent prayer—to his watch of adoration—he opens himself to the gift of the divine intimacy or, if you will, to the surpassing friendship of Jesus Christ. In this kind of prayer, words are not necessary. If there are words, they are uttered as a means to the union of love in silence.

Blessed Schuster was the disciple of another Benedictine monk, some years his senior, Blessed Placido Riccardi (1844–1915), beatified by Pope Pius XII in 1954. Blessed Placido Riccardi devoted his entire monastic life to intimate conversation with God. Blessed Riccardi lamented that when he was named rector of the basilica of Farfa, he found it necessary to devote three days of work to the preparation of his Sunday sermon. This left him, he wrote, only four days to dedicate entirely to prayer. Blessed Schuster says of him, In terra positus, in cœlis habitabat, “placed upon the earth, he dwelt in heaven”. In every generation, the Benedictine tree produces such fruits: men and women who, like the Angels in heaven, live in a state of perpetual adoration; souls to God speaks, as once to Moses, face to face, as a man is wont to speak to his friend.