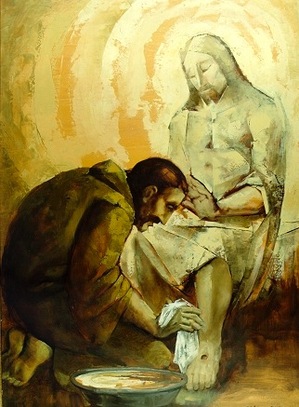 CHAPTER XXXVI. Of the Sick Brethren
15 Mar. 15 July. 14 Nov.
Before all things and above all things care is to be had of the sick, that they be served in very deed as Christ Himself, for He hath said: “I was sick, and ye visited Me.” And, “What ye have done unto one of these little ones, ye have done unto Me.” And let the sick themselves remember that they are served for the honour of God, and not grieve the brethren who serve them by unnecessary demands. Yet must they be patiently borne with, because from such as these is gained a more abundant reward. Let it be, therefore, the Abbot’s greatest care that they suffer no neglect. And let a cell be set apart by itself for the sick brethren, and one who is God-fearing, diligent and careful, be appointed to serve them. Let the use of baths be allowed to the sick as often as may be expedient; but to those who are well, and especially to the young, let it be granted more seldom. Let the use of flesh meat also be permitted to the sick and to those who are very weakly, for their recovery: but when they are restored to health, let all abstain from meat in the accustomed manner. The Abbot must take all possible care that the sick be not neglected by the Cellarer or servers; because whatever is done amiss by his disciples is laid to his charge.

Saint Benedict, following Saint Basil and Saint Augustine, places care of the sick before all things and above all things. One finds comparable expressions in Chapter IV where Saint Benedict enjoins us “To prefer nothing to the love of Christ”, and in Chapter XLIII where he says, “Let nothing, then, be preferred to the Work of God”. Saint Benedict’s five dispositions for the care of the sick are based on perennially sound principles of the art of healing:

1) A suitable place must be set apart for the sick. Let a cell be set apart by itself for the sick brethren.
2) The personnel are to be carefully chosen. One who is God-fearing, diligent and careful.
3) The use of therapeutic baths is permitted.  Let the use of baths be allowed to the sick as often as may be expedient.
4) Provision is to be made for a suitable diet. Let the use of flesh meat also be permitted to the sick and to those who are very weakly, for their recovery.
5) The abbot is charged with the direction of the infirmary. The Abbot must take all possible care that the sick be not neglected by the Cellarer or servers; because whatever is done amiss by his disciples is laid to his charge.

Saint Benedict puts in place a structure that, even today, can serve as a blueprint for an effective clinic or hospital with its building,  medical personnel, specialised therapeutic services, dietary questions, and general direction. The sons of Saint Benedict have a long tradition of cultivating the medicinal sciences and arts. Even though the care of the sick, before all things and above all things, is the responsibility of the abbot and of the fathers and brothers appointed to this charge, no one in the monastery is dispensed from looking after an infirm brother with solicitude, kindness, and sympathy. I do not mean by this that anyone may interfere in the care of the sick brother, giving advice and prescribing remedies. I mean, rather, that everyone ought to be attentive and quick to help the brother who is infirm, fatigued, or unable to keep up with the rhythm of the community.

The monk who is sick or fatigued must never be allowed to become isolated. No one is dispensed from visiting a brother brought low by infirmity, for Our Lord says, “I was sick, and you visited me” (Matthew 25:36). One should make it a practice to visit a sick brother at least once a day. It is not necessary to prolong the visit; it is enough to look in on the brother, to ask him if he needs anything, and to give him news of the community. When brother is prevented by illness from coming to the daily Chapter or to recreation, he can begin to feel alienated from the rest of the community. If a sick brother cannot come to the community, the community must go to him, one brother at a time, taking care, all the same, not to fatigue the brother nor disturb his rest.

Many years ago, when I was ill and suffering from a high fever, the good Father Infirmarian looked after me with a mother’s tenderness. I remember him saying, “A sick monk should not be made to miss the care of his mother”. He lifted me out of bed, placed me in a comfortable chair, and replaced all the crumpled bed linens soaked with perspiration with fresh, clean bed linens, before helping me back into bed. He did this as often as necessary until the fever subsided.

Very often a sick brother needs help keeping his cell tidy. One visiting a sick brother should always offer to return trays and crockery and glasses to the kitchen. One can always offer to empty a sick brother’s dustbin, ask if he needs clean towels, return books to the library for him, and attend to his laundry. It is perfectly acceptable to offer a sick brother little treats, provided that one has first obtained the infirmarian’s permission to do so. The sick brother is a real presence of Christ in the monastery. Our Declarations make this clear:

97. The community, for their part, will show their sick brethren the most tender compassion in both word and deed. Believing that, save in the Most Holy Sacrament of the Altar, Our Lord is nowhere more present in the monastery than in the person of a monk brought low by infirmity, the monks will treat him with the greatest charity, making allowance for his weaknesses and bearing his burdens.

As for the sick themselves, they must not take advantage of the love shown them, by becoming capricious, cranky, and demanding. If the sick are served with tenderness and reverence, it is for God’s sake. It is easy for a sick brother to begin to see himself as the centre of the universe, to become self-absorbed, and anxious over many things. The brother who falls into these faults has lost sight of the meaning of his monastic oblation. By Baptism as by virtue of his monastic profession and consecration, the monk is a victim, that is one united to the immolated Lamb and, with Him, made over to God in sacrifice. The Apostle says:

The vocabulary of victim and victimhood belongs to the liturgy of the Church (the lex orandi), wherein it is applied to all the baptized insofar as they are united to Christ in the mystery of His Sacrifice. A victim, in the traditional liturgical sense of the term, is not one to whom something bad has happened; a victim is a sacrificial offering placed upon the altar, whence it ascends to God. We pray, for instance, in the Secret of the Votive Mass of Jesus Christ, Eternal High Priest:

O Lord, may Jesus Christ, our Mediator,
render these offerings acceptable to Thee,
and may He present us with Himself as victims agreeable to Thee.

A monk living with chronic illness will find a serene joy in the midst of suffering once he begins to place himself with Our Lord on the altar of His sacrifice. Then he will be caught up in the immense movement out of self and into the infinity of God to which the priest invites the people in every Holy Mass: Sursum corda! Hearts on high! The monk, who accepts his illness in the light of the Holy Sacrifice of the Mass, will begin to see his sickroom as a sanctuary, his bed as an altar, and himself as an oblation—a sacrificial victim —in the hands of Christ the Priest. Illness, weakness, and fatigue, be they physical or mental, or both at the same time, can become life-giving when infused with the dispositions of the Heart of Jesus, Priest and Victim in His Passion, and in the Sacrament of His Love, the abiding memorial of His Passion.

Image courtesy of the Fatebenefratelli of Saint John of God.