Skip to content
HomeRule of Saint BenedictOf the Weekly Servers in the Kitchen (XXXV:I) 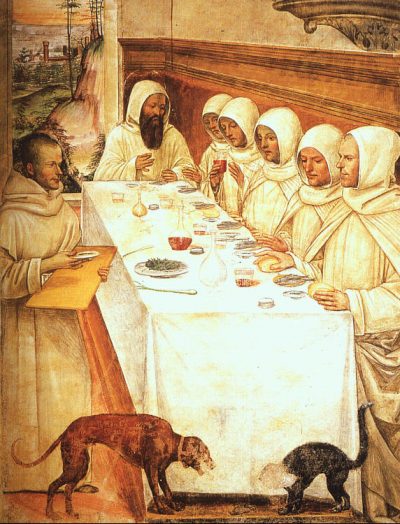 Let the brethren wait on one another in turn, so that none be excused from the work of the kitchen, except he be prevented by sickness or by some more necessary employment; for thus is gained a greater reward and an increase of charity. But let assistance be given to the weak, that they may not do their work with sadness; and let all have help according to the number of the community and the situation of the place. If the community be large, let the Cellarer be excused from work in the kitchen, and also those, as already mentioned, who are occupied in more urgent business. Let the rest serve each other in turn with all charity. Let him who endeth his week in the kitchen, make all things clean on Saturday, and wash the towels where with the brethren dry their hands and feet. Let both him who goeth out and him who is coming in wash the feet of all. Let him hand over to the Cellarer the vessels of his office, clean and whole; and let the Cellarer deliver the same to him who entereth, that he may know what he giveth and what he receiveth.

Without any doubt, the kitchen service in a monastery demands much charity and patience. I associate the service of the kitchen with the words of the Apostle: “But I most gladly will spend and be spent myself for your souls” (2 Corinthians 12:15). Even if one is not directly responsible for the preparation of meals—cooking is, after all, an art that requires skill and a certain talent—the service in the refectory is an opportunity to spend oneself, and to be spent, for one’s brethren.

We have, in this chapter, more evidence of Saint Benedict’s discretion and compassion. He allows that the sick be dispensed from this service, as well as those who are burdened with pressing responsibilities in other sectors of the monastery. The most compelling phrase in this chapter is, I think, this one: “Let assistance be given to the weak, that they may not do their work with sadness”. This is one of the great over–arching principles of the Holy Rule. Saint Benedict here reveals his fatherly solicitude for the weak, and his concern that no one do his work with sadness. Saint Benedict’s primary concern is not for an efficient organisation; it is, rather, for the weak and, then, for those who risk falling into sadness.

There must be good order in a monastery. No one would contest this and Saint Benedict himself has a remarkable gift for organisation. He has an even greater gift of solicitude for the weak, of attention to the sick, and of concern for the emotional and spiritual health of his sons. When the abbot of a monastery and his collaborators begin to see the monks as cogs in a piece of machinery, that monastery is already in a critical state of decline. The abbot is not the boss of a business enterprise. He is a father who must, as Saint Benedict says elsewhere, “so temper all things, that the strong may have something to strive after, and the weak nothing at which to take alarm” (Chapter LXIV).

It is a privilege to serve one’s fathers and brothers at table. The service of the kitchen and refectory allow a monk to hear in a very real way the words of Our Lord: “I was hungry, and you gave me to eat; I was thirsty, and you gave me to drink” (Matthew 25:35). In treating of the weekly servers in the kitchen, Saint Benedict makes a point of insisting on cleanliness and good order. Keeping things tidy is an expression of charity for one’s brothers and, at the same time, of reverence for the house of God and for all it contains.