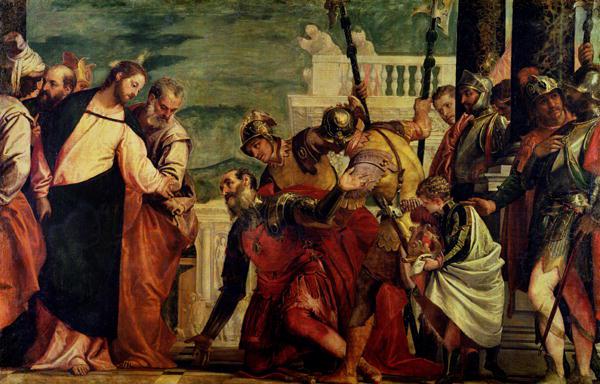 In yet another instance of the liturgical providence of God, today’s Collect dovetails with the passage from the Holy Rule that we read this morning in Chapter. Saint Benedict says that when a monk comes up against hard and contrary things, and even when he is offended, he should embrace such adversities patiently, and with interior quiet. Patience, then, and interior quiet, are the virtues Saint Benedict enjoins his sons to practise, not only when all is going well, but especially when things are not going well.

The man to whom God grants pardon can be at peace with himself and with others. Such a man can face adversities with a quiet mind. The Collect describes the effect of the divine pardon: it cleanses away what it forgives. A merely human pardon forgives the offense, but the record of it, like a kind of dark spectre, continues to haunt the secret caverns of one’s consciousness. The pardon of God forgives the offense and, at the same time, expunges it and exorcises it altogether. Thus is a man rendered capable of serving God with a quiet mind. A quiet mind is a great grace. Not for nothing does the Church make it the object of her prayer today.

The Office of Lauds and Vespers, however, must never conclude without the Lord’s Prayer being said aloud by the Superior, so that all may hear it, on account of the thorns of scandal which are wont to arise; so that the brethren, by the covenant which they make in that prayer when they say “Forgive us as we forgive,” may cleanse themselves of such faults. (Holy Rule, Chapter XIII)

The much celebrated pax benedictina is the fruit of divine forgiveness. A Benedictine abbey is an abode of peace in beauty, not because is a paradise untouched by sin, but because it is a place where the forgiveness of God reaches souls, again and again, restoring them to wholeness and to peace of mind. The man who has recovered the joy of a quiet mind will want to sing the praises of God. His life is characterised not by a dour sense of foreboding and by the oppressive weight of guilt but by thanksgiving. His focus shifts from the sight of his own unloveliness to the indescribable and ravishing loveliness of God. Such beauty lifts a man out of himself and sets him on course for heaven. Praise becomes the new imperative of his life. Thus does Saint Paul say in the Epistle:

Be ye filled with the holy Spirit, speaking to yourselves in psalms, and hymns, and spiritual canticles, singing and making melody in your hearts to the Lord. (Ephesians 5:19)

The Gradual, a Eucharistic text, chanted in the Mass of Corpus Christi, and also daily at table, already points to the Holy Sacrifice, the Great Thanksgiving, and the summit towards which all the Church’s psalms, and hymns, and spiritual canticles are ordered.

The eyes of all hope in thee, O Lord: and thou givest them meat in due season. Thou openest thy hand, and fillest with blessing every living creature. (Psalm 144:15–16)

The Alleluia verse is the song of the man cleansed and quieted by the secret operations of divine grace:

There are those, nonetheless, who resist believing in the pardon of God, even when the liturgy, and the saints, and the angelic choirs assure them of the contrary. There are souls who have grown quite fond of their guilt and accustomed to living in perpetual disquiet. Such souls are infected with a terrible species of spiritual pride, and it is this pride that keeps them from accepting what God waits to give them.

The ruler of Capharnaum who besought Jesus to heal his son, is given us today as the example of one humble enough to believe that God will in fact do what He has promised.

The man believed the word which Jesus said to him, and went his way. (John 4:50)

The Secret refers to the medicinal potency of the Holy Sacrifice. The holy mysteries of the Body and Blood of Christ are a remedy for sin–sick souls, expunging vice from the heart.

May these mysteries, we beseech Thee, O Lord, bring us a heavenly remedy and root out all vice from our hearts.

The Communion Antiphon is effectively placed in the mouth of the ruler. It is he who sings in thanksgiving:

Be thou mindful of thy word to thy servant, in which thou hast given me hope. (Psalm 118:49)

It remains for me to say one last thing: in the practise of all that is enjoined on us by today’s Holy Mass, we have mighty allies and powerful friends. I speak, of course, of our holy guardian angels. The joy of the angels is to see us receive the pardon of God. Nothing causes the angels to praise God more than the sight of a soul that, already here below in this valley tears, has begun to experience something of the heavenly liturgy where all the blessed, in symphony with the angels, ceaselessly sing: