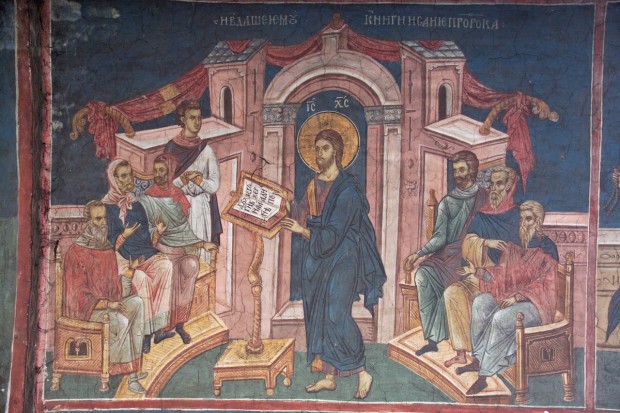 And Jesus returned in the power of the spirit, into Galilee, and the fame of him went out through the whole country. And he taught in their synagogues, and was magnified by all. And he came to Nazareth, where he was brought up: and he went into the synagogue, according to his custom, on the sabbath day; and he rose up to read. And the book of Isaias the prophet was delivered unto him. And as he unfolded the book, he found the place where it was written: The Spirit of the Lord is upon me. Wherefore he hath anointed me to preach the Gospel to the poor, he hath sent me to heal the contrite of heart, To preach deliverance to the captives, and sight to the blind, to set at liberty them that are bruised, to preach the acceptable year of the Lord, and the day of reward. And when he had folded the book, he restored it to the minister, and sat down. And the eyes of all in the synagogue were fixed on him. And he began to say to them: This day is fulfilled this scripture in your ears. And all gave testimony to him: and they wondered at the words of grace that proceeded from his mouth, and they said: Is not this the son of Joseph? (Luke 4:14-22)

Adoration: It is Enough to Say “Amen”
The mysteries announced in the Gospel are fulfilled in the Most Holy Eucharist. Everything that we see Our Lord do, and hear Him say — and all that He is in relationship to the Eternal Father, and in relationship to us — is given us in the adorable Sacrament of the Altar. This is why Mother Mectilde, in a beautiful passage of her writings on Holy Communion, says that after receiving Holy Communion, it is enough for us to remain quiet, saying only “Amen” to all that we have received; to all that Christ is, in us, and for us, and to His Father.

In order to feel and realize his operations they need only be recollected, if possible, and assent in all simplicity to what the divine virtue and personality of Jesus Christ is accomplishing in their soul. If they cannot possess themselves in peace, reverence and attention, let them from their very heart repeat over and over again in union with the church, Amen. This word is full of mystery, it is the soul’s acknowledgement of, and consent to what God does in his Church and to what the Church does for God. (Le véritable esprit)

This “Amen” that is the perfect thanksgiving after Holy Communion is, also, the perfect expression of our adoration of the Most Holy Sacrament. Today, as you gaze in adoration upon the Eucharistic Face of Jesus, what will you see?

— You will see that the Spirit of the Lord rests upon Him. Wheresoever the Body of Christ is truly present, there also the Holy Ghost is present and, not only present, but communicated to us abundantly, like the oil poured out over the Head, that runs down over the entire Mystical Body of Christ, even to the very least of His. Members. To this, say “Amen.”

—  You will see that from the Sacrament of His Love, He is preaching, at every moment, the Gospel to the poor. You have only to open the ear of your heart, recognizing that you are poor, and you will hear Him. To this, say “Amen.”

— You will see that from the Sacrament of His Love, even now, He is healing the broken-hearted. Bring to Him your broken heart, place it before Him, even when you feel that it is in a thousand pieces, and quite beyond being made whole again. He will do for you what the Holy Gospel announces: He will repair your broken heart. To this, say “Amen.”

— You will see that from the Sacrament of His Love, even now, He is preaching deliverance to captives. Acknowledge the things that hold you captive. Go to Him, and say, “In this thing, Lord Jesus, and in this other thing, I am not free. Do Thou for me what, of myself, I cannot do.” Set me free so that, freely and joyfully, I may love Thee and live the abundant life that is Thy will for me.” To this, say “Amen.”

— You will see that from the Sacrament of His Love, He gives sight to the blind. We saw, on the feast of the Epiphany, that the adorable mystery of the Eucharist is a wellspring of Light. There is no blindness that cannot be cured in contemplating the Eucharistic Face of Jesus. To this, say “Amen.”

— You will see that from the Sacrament of His Love, even now, He sets free those who are bruised from having been too long in bonds. He will not ask you why you have been so long in bondage, nor will He condemn you for having fallen into such an unfortunate state. His desire is only to set you free, and to spread the balm of His mercy over the bruises left on your soul by the heavy chains of sin. To this, say “Amen.”

— You will see that from the Sacrament of His Love, He preaches, at every moment, the acceptable year of the Lord, and the day of reward. As soon as a soul enters the presence of the Most Holy Sacrament, that soul finds herself transported into the acceptable year of the Lord, and into the day of reward. By this, I mean, that adoration of the Most Holy Sacrament opens to us a vast space of grace in we discover, with Mary, that nothing is impossible to God; and with Saint Paul, that for those who love God, all things work together unto good. To this, say “Amen.”