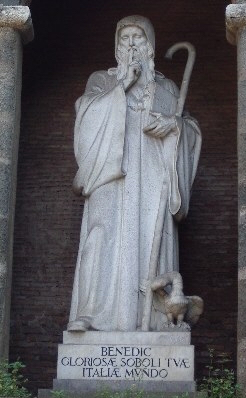 The ninth degree of humility is, that a monk refrain his tongue from speaking, keeping silence until a question be asked him, as the Scripture sheweth: “In much talking thou shalt not avoid sin”: and, “The talkative man shall not be directed upon the earth.”

The inability to be still is a spiritual malady of epidemic proportions in today’s culture. Symptomatic of this spiritual malady is the flight from silence and, more and more, a pervasive addiction to the social media. Even men aspiring to life in the cloister are subject to the allurements of the social media. It is not uncommon for men to require a certain amount of background noise in order to concentrate!

Should use of the social media be absolutely forbidden to monks? Is the internet always a violation of silence and a breach of enclosure? One must apply to this new situation the principles laid down by Saint Benedict in Chapter LIV:

By no means let a monk be allowed to receive, either from his parents or any one else, or from his brethren, letters, tokens, or any gifts whatsoever, or to give them to others, without permission of the Abbot. And if anything be sent to him, even by his parents, let him not presume to receive it until it hath been made known to the Abbot. But even if the Abbot order it to be received, it shall be in his power to bid it be given to whom he pleaseth; and let not the brother to whom it may have been sent be grieved, lest occasion be given to the devil. Should any one, however, presume to act otherwise, let him be subjected to the discipline of the Rule.

Let the brethren that return from a journey, on the very day that they come back, lie prostrate on the floor of the Oratory at all the Canonical Hours, while the Work of God is being performed, and beg the prayers of all on account of their transgressions, in case they should perchance upon the way have seen or heard anything harmful, or fallen into idle talk. And let no one presume to relate to another what he may have seen or heard outside the Monastery; for thence arise manifold evils.

Following Saint Benedict, we can conclude that use of the internet and social media always requires permission of the abbot, “lest occasion be given to the devil”. Again, following the principles set forth in the Holy Rule, no one ought to relate to another inappropriate or disturbing things that may have been gleaned from the social media. The dangers inherent in the use of the internet and social media must not lead to an entrenched position that would, in the end, eliminate even what is good and fruitful for fear of what is wicked and toxic. The computer and the internet have become the scriptorium of the monk of the third millennium,”providing good things, not only in the sight of God, but also in the sight of all men” (Romans 12:17).

Even more dangerous than the social media without are the media that play in one’s thoughts, especially when they fill the mind with the noise of murmuring, judgments, criticisms, and condemnations. Abba Poemen says:

A man may seem to be silent, but if his heart is condemning others he is babbling ceaselessly. But there may be another who talks from morning till night and yet he is truly silent; that is, he says nothing that is not profitable.