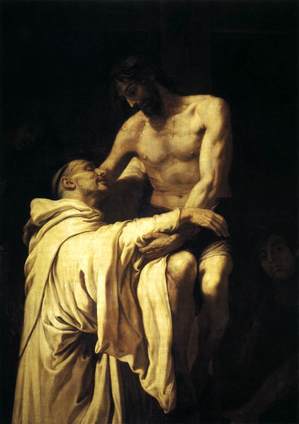 Prologue of Our Most Holy Father Benedict to His Rule

But as we go forward in our life and in faith, we shall with hearts enlarged and unspeakable sweetness of love run in the way of God’s commandments; so that never departing from His guidance, but persevering in His teaching in the monastery until death, we may by patience share in the sufferings of Christ, that we may deserve to be partakers of His kingdom. Amen.

In God’s Good Time
In the life of every monk humbled by failures, disappointments, and the experience of his own weakness, there comes an hour when God intervenes to do the things that, of himself and by himself, the monk was unable to do. Virtues formerly difficult, if not impossible to practice, become easy. Long-festering wounds are cauterized, becoming mere scars that attest to a miracle of healing. The troubles of a chronic restlessness give way to a deep and stable peace. Where, formerly, there was fear, there is childlike confidence. The heart, says Saint Benedict is dilated with an indescribable sweetness of love and, even as the body begins to slow down under the weight of the years, one begins to run, drawn on by Christ. “Draw me: we will run after thee to the odour of thy ointments” (Canticle 1:3).
When the Spirit of Truth Is Come
Increasingly, the monk lives under the guidance of God, becoming more docile to the inspirations and movements of the Holy Ghost. He realizes the truth of what, in earlier years, he struggled to integrate into his life, and has no plans apart from submission to the teachings of the Holy Ghost and perseverance in the monastery until death. “But when he, the Spirit of truth, is come, he will teach you all truth. For he shall not speak of himself; but what things soever he shall hear, he shall speak; and the things that are to come, he shall shew you. He shall glorify me; because he shall receive of mine, and shall shew it to you” (John 16:13-14).
Into the Embrace of the Cross
Participation in the sufferings of Christ becomes, at this season of the monk’s life, something very simple and hidden, realized not by any acts of ascetical prowess, but only by a humble patience. He longs for union with Love Crucified. He yearns to be one with the Lamb on the altar of His sacrifice, but knowing himself too weak to ascend to the Cross by his own efforts, he is content to be drawn upward into its embrace as God wills, when He wills, and as He wills.
In the end, the Suscipe of his monastic profession becomes a monk’s final aspiration: “Receive me — lift me up unto Thyself — according to Thy word, and I shall live: and let me not be confounded in my expectation” (Psalm 118:116). He knows that, at the hour willed by the Father, he will, like a little child, be carried into the kingdom in the arms of Love.