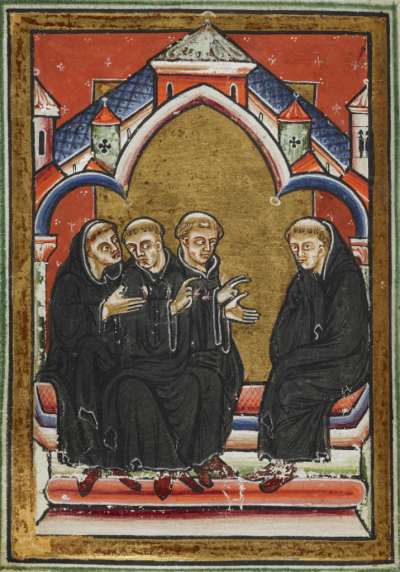 CHAPTER III. Of calling the Brethren to Council
16 Jan. 1

As often as any important matters have to be transacted in the monastery, let the  Abbot call together the whole community, and himself declare what is the question to be settled. And, having heard the counsel of the brethren, let him consider within himself, and then do what he shall judge most expedient. We have said that all should be called to council, because it is often to the younger that the Lord revealeth what is best. But let the brethren give their advice with all subjection and humility, and not presume stubbornly to defend their own opinion; but rather let the matter rest with the Abbot’s discretion, that all may submit to whatever he shall judge to be best. Yet, even as it becometh disciples to obey their master, so doth it behove him to order all things prudently and with justice.

Today we read the first half of Chapter III. It is carefully crafted. Saint Benedict indicates the summit of the chapter by the word igitur, meaning “therefore”. The word igitur carries a certain weight here. It gives importance to the principle that our lawgiver is setting forth.  All that comes before the crowning sentence of Chapter III, leads up to it, and all that follows the same crowning sentence, must be read in light of it.

In omnibus igitur omnes magistram sequantur regulam.
Let all therefore, follow the Rule in all things as their guide, and let no man rashly depart from it.

Why does the Rule hold such great importance? And why does Saint Benedict give it so much authority? Our one magister (teacher) is “the Lord Christ, our true king” (Prologue); the Rule, however is our magistra, and this because the Holy Rule, being woven of Sacred Scripture, is a synthesis of God’s perfect plan for the life of monks. The Rule is an abridgement for monks of all that God has revealed in the Gospel of Jesus Christ, in the Acts of the Apostles, in the Epistles of Saint Paul, and in the other books of Sacred Scripture. The Holy Rule enshrines the Word of God for monks. Saint Benedict’s monk is, therefore, eager to listen to the reading of the Holy Rule; he never tires of having it explained to him. Saint Benedict’s monk opens the Rule with joy because, for him, it contains the Word of God. “Thy words were found, and I did eat them, and thy word was to me a joy and gladness of my heart: for thy name is called upon me, O Lord God of hosts” (Jeremias 15:16).

Whereas the Rule of the Master contains only a few lines concerning the abbot’s consultation of the brethren, Saint Benedict devotes an entire chapter to the subject. Saint Benedict’s chapter is original. He probably wrote it in a later redaction of the text, after having learned from a long experience of government. Saint Benedict refers, all the same, to an older monastic tradition. Meetings of the community in view of taking a decision were not unknown even in Egypt. You recall the story of Abba Moses who was summoned to a meeting to pass judgment on a brother who had sinned.

A brother at Scetis committed a fault. A council was called to which Abba Moses was invited, but he refused to go to it. Then the priest sent someone to say to him, ‘Come, for everyone is waiting for you.’ So he got up and went. He took a leaking jug, filled it with water and carried it with him. The others came out to meet him and said to him, ‘What is this, Father?’ The old man said to them, ‘My sins run out behind me, and I do not see them, and today I am coming to judge the errors of another.’ When they heard that they said no more to the brother but forgave him.

The importance that Saint Benedict gives to this chapter, placing it immediately after the chapter on the abbot, shows that no one in the monastery, not even the youngest brother, is excused from contributing to the exchange of opinions, insights, and ideas, when critical questions are brought to council. Saint Benedict respects the contribution of the young brethren because he knows that it pleases God to reveal to the little ones the things that He hides from the learned and the clever.

At that time Jesus answered and said: I confess to thee, O Father, Lord of heaven and earth, because thou hast hid these things from the wise and prudent, and hast revealed them to little ones. (Matthew 11:25–26)

In providing for the council of the brethren, Saint Benedict in no way diminishes the authority of the abbot. The abbot himself “declares what is the question to be settled” and lays it before the community. The brethren offer their opinions “with all subjection and humility”, and the abbot, having heard them, takes the decision provide et iuste, that is, prudently and justly. The council of the brethren aims at one thing: the unity that is the fruit of obedience. “And the multitude of believers had but one heart and one soul” (Acts 4:32)