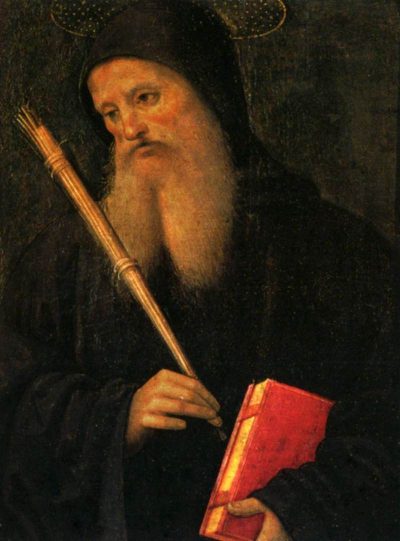 Let us do as saith the prophet: “I said,  I will take heed to my ways, that I sin not with my tongue, I have placed a watch over my mouth; I became dumb and was silent, and held my peace even from good things.” Here the prophet sheweth that if we ought at times to refrain even from good words for the sake of silence, how much more ought we to abstain from evil words, on account of the punishment due to sin.

Therefore, on account of the importance of silence, let leave to speak be seldom granted even to perfect disciples, although their conversation be good and holy and tending to edification; because it is written: “In much speaking thou shalt not avoid sin”; and elsewhere: “Death and life are in the power of the tongue.” For it becometh the master to speak and to teach, but it beseemeth the disciple to be silent and to listen. And therefore, if anything has to be asked of the Superior, let it be done with all humility and subjection of reverence. But as for buffoonery or idle words, such as move to laughter, we utterly condemn them in every place, nor do we allow the disciple to open his mouth in such discourse.

Abbot Hunter–Blair translates the  title of this chapter of the Holy Rule, De Taciturnite, as “Of the Practice of Silence”. It might also be translated, “Of the Habit of Keeping Silence”. Saint Benedict, first of all, presents silence as a means of avoiding sins of the tongue. Does not Saint James say, “If any man offend not in word, the same is a perfect man” (James 3:2)? And the same Apostle says, “The tongue is indeed a little member, and boasteth great things. Behold how small a fire kindleth a great wood. And the tongue is a fire, a world of iniquity” (James 3:5–6).

Saint Benedict also presents silence as an expression of the humility that befits one who is a disciple, that is, a learner in the school of the service of the Lord. This is the silence of the man concerning whom Wisdom says, “Blessed is the man that heareth me, and that watcheth daily at my gates, and waiteth at the posts of my doors” (Proverbs 8:34). It is the silence of the Blessed Virgin Mary, who “kept all these words, pondering them in her heart” (Luke 2:19). It is the silence of Mary of Bethany, who “sitting also at the Lord’s feet, heard his word.” (Luke 10:39). It is even the silence of the Gerasene demoniac who, after his deliverance, was found sitting at the feet of Jesus. (Luke 8:35)

The humble man knows that he has come to the monastery to learn. He silences his inward and outward conversations, not in order to stop thinking, but in order to open himself to the splendour of the truth. Blessed Elizabeth of the Trinity, although not a Benedictine, expresses something of this understanding of Benedictine silence in her famous prayer:

O Eternal Word, utterance of my God, I want to spend my life listening to you, to become totally teachable so that I might learn all from you.

For the son of Saint Benedict, listening to the Word means listening to the teaching of the abbot. This is, as Saint John Paul II puts it, “the listening that changes life” (Orientale Lumen, article 10). “It becometh the master to speak and to teach, but it beseemeth the disciple to be silent and to listen” (Chapter VI). Abbot Herwegen suggests that Saint Benedict is, in this chapter, concerned with reserving the right to teach to the abbot alone, lest self–appointed teachers attract disciples to themselves and so divide the community into multiple schools and factions. Even monasteries are not preserved from the division caused by men who arrogate to themselves the role of teaching:

The time will surely come, when men will grow tired of sound doctrine, always itching to hear something fresh; and so they will provide themselves with a continuous succession of new teachers, as the whim takes them. (2 Timothy 4:3–4)

The proud man, ever full of himself, has an opinion about everything, and his opinion, so he thinks, must prevail. Even if his tongue is not wagging, his mind is full of the noise of wrangling. Without saying a word, he criticises others. Mentally, he interrupts their speech, rehearses arguments against what they are saying, and challenges their discourse. Without speaking a word, such a man is full of noise. He is no lover of silence.

Saint Benedict never intended that his monks should forego all speech. He allows for speaking and, in fact, assumes that his monks will talk. There is evidence of this throughout the Holy Rule. Saint Benedict says that: “Monks should love silence at all times, but especially during the hours of the night” (Chapter XLII). At the same time, he allows his monks, when “they rise for the Work of God, gently to encourage one another, because of the excuses of the drowsy.” (Chapter XXII). In treating of reading in the refectory, Saint Benedict says, “Let no one presume to put any questions there, either about the reading or about anything else, lest it should give occasion for talking” (Chapter XXXVIII). This suggests that elsewhere and at other times certain exchanges were permitted, but within certain limits. “And let not one brother associate with another at unseasonable hours” (Chapter XLVIII).

With regard to the Oratory of the monastery, Saint Benedict says, “When the Work of God is ended, let all go out with the utmost silence, paying due reverence to God, so that a brother, who perchance wishes to pray by himself, may not be hindered by another’s misconduct” (Chapter LII). Here, silence is the expression of the profound reverence that characterises the whole ethos of the Rule. It is the silence of  humble adoration.

Our Declarations invite us to consider the silence of the Sacred Host. In the Most Holy Sacrament of the Altar, the Word abides in perfect stillness. The monk who remains silent in the great silence of the Host will, over time, enter into the prayer of the Son and, with the Son, pass into the rest of God. “Let us hasten therefore to enter into that rest” (Hebrews 4:11).

44. The silence of the Sacred Host must reign, then, not only over the hearts, minds, and lips of the monks, but over the entire monastery and its land, so as to foster an atmosphere of order and of peace conducive to the prayer of the heart in a spirit of ceaseless adoration.

45. By practicing silence at all times, the monks will avoid innumerable sins of the tongue, and foster, both within themselves and within the monastery, an atmosphere that offers optimal resonance to the Word of God.

46. By assiduous contemplation and adoration of the Sacred Host, the monks will come to love the observance of silence by which it is given them to imitate the sacramental state of the Incarnate Word, who, now in the Most Holy Sacrament of the Altar, as once in His hidden life and bitter Passion, remains silent and still.