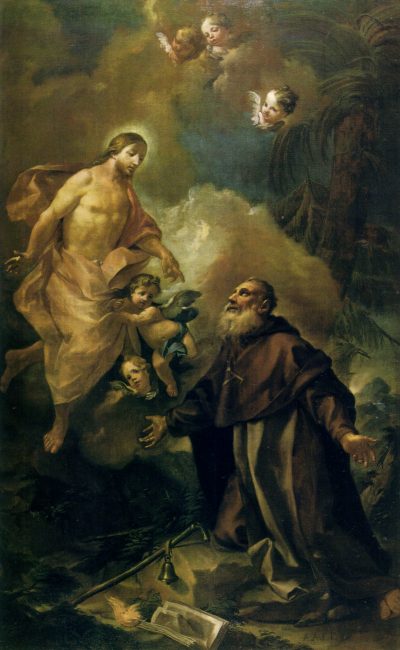 As there is an evil zeal of bitterness, which separateth from God, and leads to hell, so there is a good zeal, which keepeth us from vice, and leadeth to God and to life everlasting. Let monks, therefore, exert this zeal with most fervent love; that is, “in honour preferring one another.” Let them most patiently endure one another’s infirmities, whether of body or of mind. Let them vie with one another in obedience. Let no one follow what he thinketh good for himself, but rather what seemeth good for another. Let them cherish fraternal charity with chaste love, fear God, love their Abbot with sincere and humble affection, and prefer nothing whatever to Christ. And may He bring us all alike to life everlasting.

Chapter LXXII is a kind of catechesis on life together. In more than one point, it corresponds to the Instruments of Good Works set forth in Chapter IV. Saint Benedict draws inspiration from the exhortations addressed to Christians in the Age of the Martyrs. Saint Polycarp of Smyrna, for example, writes thus to the Philippians:

Stand fast, therefore, in these things, and follow the example of the Lord, being firm and unchangeable in the faith, loving the brotherhood, and being attached to one another, joined together in the truth, exhibiting the meekness of the Lord in your intercourse with one another, and despising no one. When you can do good, defer it not, because alms delivers from death. Be all of you subject one to another. (Epistle to the Philippians 10)

Chapter LXXII, culminating in a characteristically Benedictine expression of total devotion to Christ, is even closer to a passage of Saint Cyprian on the Lord’s Prayer:

Now the will of God is that which Christ did and taught. It is humility in conduct, stability in faith, modesty in words, justice in deeds, mercy in works, strictness in morals, unwillingness to do wrong, and willingness to endure wrong : it is to preserve peace with our brethren, to love God with our whole heart, to have affection for Him as our Father, to fear Him as our God, to prefer nothing before Christ because He preferred nothing before us, to cling inseparably to His love. (On the Lord’s Prayer, Chapter XV)

Throughout the Rule, Saint Benedict insists on the compassion for every infirmity and solicitude for those who are fragile, and in Chapter XXXVI he says that the sick are to be served in very deed as Christ Himself. In Chapter LXIV Saint Benedict enjoins the abbot “to so temper all things, that the strong may have something to strive after, and the weak nothing at which to take alarm”. In today’s chapter, however, Saint Benedict makes clear that the loving patience of the abbot and the brethren is to be extended as much to those who suffer from infirmities of the mind as to those who suffer from infirmities of the body. In reality, the two kinds of infirmity are nearly always interrelated.

Concerning the “chaste love” that characterises fraternal charity and the “humble affection” of monks for their abbot, I am reminded of what Saint Athanasius wrote about our father Saint Antony:

Antony was beloved by all. He subjected himself in sincerity to the good men whom he visited, and learned thoroughly where each surpassed him in zeal and discipline. He observed the graciousness of one; the unceasing prayer of another; he took knowledge of another’s freedom from anger and another’s loving-kindness; he gave heed to one as he watched, to another as he studied; one he admired for his endurance, another for his fasting and sleeping on the ground; the meekness of one and the long-suffering of another he watched with care, while he took note of the piety towards Christ and the mutual love which animated all. Thus filled, he returned to his own place of discipline, and henceforth would strive to unite the qualities of each, and was eager to show in himself the virtues of all. With others of the same age he had no rivalry; save this only, that he should not be second to them in higher things. And this he did so as to hurt the feelings of nobody, but made them rejoice over him. So all they of that village and the good men in whose intimacy he was, when they saw that he was a man of this sort, used to call him God-beloved. And some welcomed him as a son, others as a brother. (Life of Antony, 4)