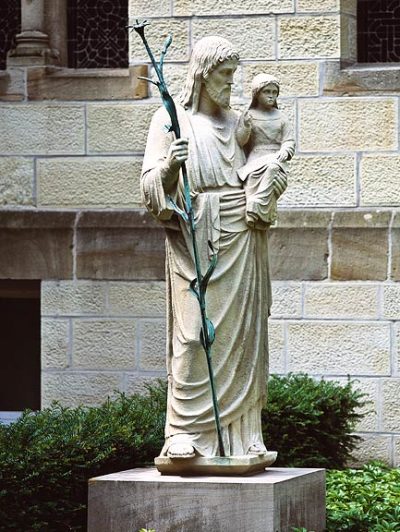 Above all let him not, overlooking or under-valuing the salvation of the souls entrusted to him, be too solicitous for fleeting, earthly, and perishable things; but let him ever bear in mind that he hath undertaken the government of souls, of which he shall have to give an account. And that he may not complain for want of worldly substance, let him remember what is written: “Seek first the kingdom of God and His justice, and all these things shall be added unto you.” And again: “Nothing is wanting to them that fear Him.”

And let him know that he who hath undertaken the government of souls, must prepare himself to render an account of them. And whatever may be the number of the brethren under his care, let him be certainly assured that on the Day of Judgment he will have to give an account to the Lord of all these souls, as well as of his own. And thus, being ever fearful of the coming inquiry which the Shepherd will make into the state of the flock committed to him, while he is careful on other men’s account, he will be solicitous also on his own. And so, while correcting others by his admonitions, he will be himself cured of his own defects.

Twice, in a single sentence, Saint Benedict speaks of souls: the abbot is «not to overlook nor undervalue the salvation of souls entrusted to him», and «he is ever to bear in mind that he hath undertaken the government of souls». The temptation to become anxious over fleeting, earthly, and perishable things always haunts an abbot. The preoccupation with material questions is something easily rationalised, especially in the beginnings of a monastery, but it is not in accord with the Gospel. Our Lord’s teaching is clear:

Whenever I feel the weight of material responsibilities beginning to overwhelm me, I begin the recitation of the Litanies of Divine Providence in choir, and I intensify my recourse to Saint Joseph. The Litanies of Divine Providence are a compelling expression of trust in God and of confidence in His care for us. In those seasons and hours when we are tempted to give in to fretting and fear, we do well to meditate the invocations of the litany.

Saint Joseph is the chosen minister of the Providence of God, dispensing in due season all that is needed for our salvation and for God’s glory. The administration of the first Joseph in Egypt is a figure of Saint Joseph’s administrations all through the history of the Church:

And when there also they began to be famished, the people cried to Pharao for food. And he said to them: Go to Joseph: and do all that he shall say to you. (Genesis 41:55)

We often have the Votive Mass of Saint Joseph on Wednesday, asking him to look after all our material needs. Our Constitutions say:

The monastery is placed under the singular protection of the Holy Family, especially of Saint Joseph, who, together with the Blessed Virgin Mary, was the first adorer of the Son of God on earth. Saint Joseph is not only the protector of the monastery, but also the one to whom we look for direction and care. (Constitutions, art, 101)

I find that Saint Joseph is, of all the saints, the one most sympathetic to the abbots of monasteries. I keep this prayer in my antiphonal, and often address it to him:

O glorious Saint Joseph, spouse of the Blessed Virgin Mary, just man, son of David, whom the very Son of God did love, honour, and obey, treating thee in all things as the most devoted son treats his father, I promise and resolve, from this day forward, to look to thee as to my own father, to love thee, honour thee, and obey thee with filial devotion, and to leave to thy paternal solicitude all my needs, my anxieties, and my cares. I am confident that thou wilt be to me a father, and the best of fathers, and that, under thy protection and in thy care, I shall want for nothing. Amen.

From his place in heaven, Saint Joseph sees the whole picture. He understands the limitations and contingencies of the situation. People who visit the monastery sometimes ask, with the best intentions, if we have a work. They are generally thinking of things associated with monasteries in the popular imagination, such as the production of coffee, or beer, or chocolate, or soap, or of some other marketable commodity. Even modest cottage industries require an infrastructure: places suitably fitted out, with electricity, light, heat, water, and the necessary equipment. Our fledgling publishing house, for example, needs office space, equipment, and a room for packing and shipping. In Chapter LXVI, Saint Benedict says, “The Monastery, however, ought if possible to be so constituted that all things necessary, such as water, a mill, and a garden, and the various crafts may be contained within it”. I entrust all of this to Saint Joseph.

For the present, we must prepare a house that is safe and suitably adapted to our life. Our other immediate concern is for the initial training–up of the men whom God is sending to us. Unlike clerical institutes and religious congregations wherein, after a certain number of years, a priest or religious emerges from training equipped for the apostolate, in our way of life, the making of a monk is never really finished. I sometimes say that it takes ten years to make a monk but, in reality, the making of a monk goes on until death. The monastery is, by definition, the school of the service of the Lord. My primary task is to prepare souls, not for any specific work of the apostolate, but for the ceaseless liturgy of heaven: Sanctus, Sanctus, Sanctus.

There is a chapter in Saint Bernard’s Treatise on Consideration that I consider to be the best commentary on today’s portion of Chapter II. Saint Bernard is writing here, not to another abbot, but to Blessed Pope Eugenius III. He invites the prelate to take time for consideration, that is, to look after himself, lest in caring for the Church, he become estranged from his own soul:

Listen now to what I condemn in thee and to what I would exhort thee. If thou devotest to external activities all thy time and all thy attention, reserving nothing for consideration: “What shall I say to thee? Do I praise thee? In this I praise thee not” (1 Corinthians 11:22). Neither, as I suppose, would anyone else who remembered the words of Solomon, “He that is less in action shall receive wisdom” (Ecclesiasticus. 38:25). Even for action itself it is expedient that it should follow, not precede, consideration. Again, if thou desirest to put thyself unreservedly at the disposal of all, after the example of him who “became all things to all men” (1 Corinthians 9:22), I certainly applaud thy charity—provided only that it be full. But how can thy charity be full unless thou thyself also art comprehended in its embrace? Thou art a man like the rest of us. Therefore, if thy charity is to be considered full and perfect it ought to include thee as well as all other men in its folds. For, in the words of the Lord, what will it profit thee to gain the whole world, if thou losest thyself alone? (Matthew 16:26). Wherefore, since everybody else enjoys a share of thy solicitude, do thou likewise participate therein. Why shouldst thou be the only one defrauded of the benefit of thy zeal? How long wilt thou be as “a spirit that goeth and returneth not” (Ps. 77:39)? How long wilt thou refuse to admit thyself also in thy turn amongst the multitude of men to whom thy door stands open? Both “to the wise and to the unwise thou art a debtor” (Romans 1:14), and dost thou deny thyself to thyself alone? Simple and wise, slaves and freemen, rich and poor, men and women, old and young, priests and laics, good and bad—all alike have a share in thee, all drink from the public fountain of thy heart—and wilt thou, though thirsty, stand aloof? If he is accursed who deteriorates his portion, what shall be the fate of him who loses it altogether? By all means let the waters of thy well flow out into the public ways; let not men alone partake thereof, but their beasts of burden likewise, and their flocks and herds; yea, draw, if so please thee, and give to drink to the camels of Abraham’s servant (Genesis 24:19, 20); only do thou also with the rest slake thy thirst at the fountain. It is written, “Neither let strangers be partakers with thee” (Proverbs 5:17). But art thou a stranger? To whom art thou not a stranger if a stranger to thyself? (Saint Bernard, De Consideratione)

Chapter II ends with a little message of hope for the abbot. Saint Benedict assures the abbot that his fatherly solicitude for the souls of his monks will also be advantageous to himself. The admonitions that he addresses to his sons will, necessarily, have an effect on himself. Thus will the abbot be corrected, not merely of his “defects” as Abbot Hunter–Blair translates, but even of his vices, those deeply–rooted patterns of behavior that impede his own transformation a claritate in claritatem, from brightness to brightness (2 Corinthians 3:18), in the radiance of the Face of Christ.