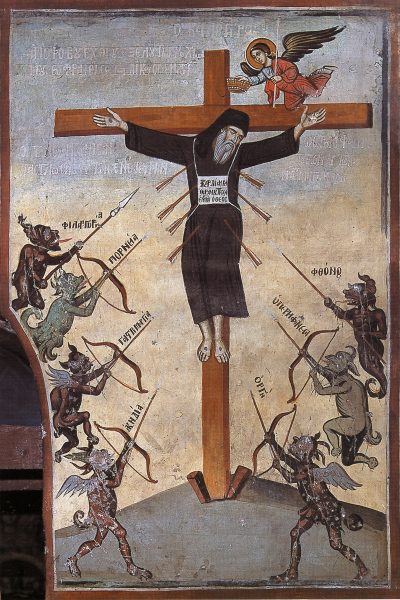 The first degree of humility is obedience without delay. This becometh those who hold nothing dearer to them than Christ, and who on account of the holy servitude which they have taken upon them, either for fear of hell or for the glory of life everlasting, as soon as anything is ordered by the superior, suffer no more delay in doing it than if it had been commanded by God Himself. It is of these that the Lord saith: “At the hearing of the ear he hath obeyed Me.” And again, to teachers He saith: “He that heareth you heareth Me.”

Just yesterday, in the Gospel for the feast of Saint Matthew we were given an example of obedience without delay.

And when Jesus passed on from thence, he saw a man sitting in the custom house, named Matthew; and he saith to him: Follow me. And he arose up and followed him. (Matthew 9:9)

I remember well how, twenty–one years ago, in May 1995 I read, for the first time, the Apostolic Letter Orientale Lumen of Saint John Paul II and discovered, with a kind of leap of the heart, his definition of monastic obedience.

The starting point for the monk is the Word of God, a Word who calls, who invites, who personally summons, as happened to the Apostles. When a person is touched by the Word obedience is born, that is, the listening which changes life. (Orientale Lumen, article 10)

This is Benedictine obedience: the listening which changes life. One sees how Chapter V of the Holy Rule returns, in some way, to the first words of the Prologue:

Hearken, O my son, to the precepts of thy Master, and incline the ear of thine heart. (Prologue)

Monastic life springs from obedience, just as the apostolic vocation of Saint Matthew sprang from obedience to the word of Jesus: “Follow me. And he arose up and followed him” (Matthew 9:9). It becomes clear, in the light of the Gospel, why Saint Benedict says the obedience without delay “becometh those who hold nothing dearer to them than Christ” (Chapter V). Love brooks no delay. The swiftness of Benedictine obedience is driven by love. Monsignor Knox captures the alacrity of Benedictine obedience in his lyrical translation of the Canticle of Canticles:

I can hear my true love calling to me: Rise up, rise up quickly, dear heart, so gentle, so beautiful, rise up and come with me. (Canticle 2:10)