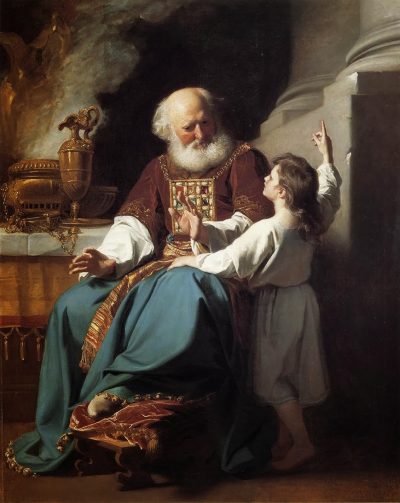 For the Abbot in his doctrine ought always to observe the bidding of the Apostle, wherein he says: “Reprove, entreat, rebuke”; mingling, as occasions may require, gentleness with severity; shewing now the rigour of a master, now the loving affection of a father, so as sternly to rebuke the undisciplined and restless, and to exhort the obedient, mild, and patient to advance in virtue. And such as are negligent and haughty we charge him to reprove and correct. Let him not shut his eyes to the faults of offenders; but as soon as they appear, let him strive with all his might to root them out, remembering the fate of Heli, the priest of Silo. Those of good disposition and understanding let him, for the first or second time, correct only with words; but such as are froward and hard of heart, and proud, or disobedient, let him chastise with bodily stripes at the very first offence, knowing that it is written: “The fool is not corrected with words.” And again “Strike thy son with the rod, and thou shalt deliver his soul from death.”

Saint Benedict admonishes the abbot with the very injunction that Saint Paul addressed to Timothy. It is good to hear the passage in its context. For Saint Benedict, the abbot, by virtue of his responsibility for a portion of the flock of Christ, ranks among the shepherds of the Church.

I charge thee, before God and Jesus Christ, who shall judge the living and the dead, by his coming, and his kingdom: Preach the word: be instant in season, out of season: reprove, entreat, rebuke in all patience and doctrine. For there shall be a time, when they will not endure sound doctrine; but, according to their own desires, they will heap to themselves teachers, having itching ears: And will indeed turn away their hearing from the truth, but will be turned unto fables. But be thou vigilant, labour in all things, do the work of an evangelist, fulfil thy ministry. Be sober. (2 Timothy 4:1–5)

Other passages in the Epistles of Saint Paul to Timothy and to Titus are equally relevant to the task of an abbot charged with the care of souls.

Be thou an example of the faithful in word, in conversation, in charity, in faith, in chastity. (1 Timothy 4:12)

A bishop must be without crime, as the steward of God: not proud, not subject to anger, not given to wine, no striker, not greedy of filthy lucre: But given to hospitality, gentle, sober, just, holy, continent: Embracing that faithful word which is according to doctrine, that he may be able to exhort in sound doctrine, and to convince the gainsayers. (Titus 1:7–9)

Let them find in all thou doest the model of a life nobly lived; let them find thee disinterested in thy teaching, worthy of their respect, thy doctrine sound beyond all cavil; so that our adversaries may blush to find that they have no opportunity for speaking ill of us. (Titus 2:7–8)

And finally, there is the admonition of Saint Peter to those set over the Church of Christ:

Feed the flock of God which is among you, taking care of it, not by constraint, but willingly, according to God. (1 Peter 5:2)

The abbot will take care to adapt himself to the temperaments, strengths, and weaknesses of the men entrusted to him. This requires, on the part of the abbot, constant vigilance and attention. He must be able to say with the Good Shepherd, Christ: “I know mine, and mine know me” (John 10:14). The abbot must know his monks, not from a distance, nor in a cold and clinical way, but by being present to them as a loving father, and by giving them ample opportunity to open their hearts to him.

Saint Benedict evokes the various types that an abbot may expect to find among his sons: in any community of a certain size there will be undisciplined and restless monks as well as obedient, mild, and patient monks. There will be some eager to advance in virtue and others content to plod along. Each type needs a particular expression of fatherly attention. Saint Benedict speaks of gentleness, severity, rigour, loving affection, and stern rebukes.

At times the abbot will need to praise a brother with a hearty “Well done!”  At other times it is enough to acknowledge with an encouraging smile the good that a brother has done. It is always appropriate to thank a brother for his efforts, or to acknowledge, in some way, a brother’s contribution to the life of the community. The abbot need never fear affirming what is good in his sons. Such affirmations give glory to God, according to what Saint James says:

Whatever gifts are worth having, whatever endowments are perfect of their kind, these come to us from above; they are sent down by the Father of all that gives light. (James 1:17)

This being said, the abbot has to have the strength to to reprove inappropriate behaviour wherever he sees it,  and to correct a brother whose attitudes, actions, or words manifest a hidden sickness of the soul. When a brother acts or speaks inappropriately, it is, in nearly every instance, symptomatic of problems festering within him. It is not enough for the abbot to treat the symptom; like a wise physician, he must identify the underlying spiritual pathology.

Saint Benedict warns the abbot against closing his eyes to a brother’s faults or, what is worse, even tolerating them out of human respect, or fear, or an unmanly softness. There are circumstances in which an abbot shrinks from intervening in a brother’s life, for fear that his intervention will be received badly, or spurned, or stir up unpleasantness. Sometimes unpleasantness is unavoidable. One learns to get through it, and to get over it. Leaving faults uncorrected causes something far worse than a passing unpleasantness; it can lead to the faults becoming habitual. Habitual faults are called vices. Once vice has made inroads in a brother’s life, the eradication of it can require a painful operation and a prolonged period of convalescence.