Skip to content
HomeBlessed Virgin MaryLifted up by the Lord to heaven (VII:1) 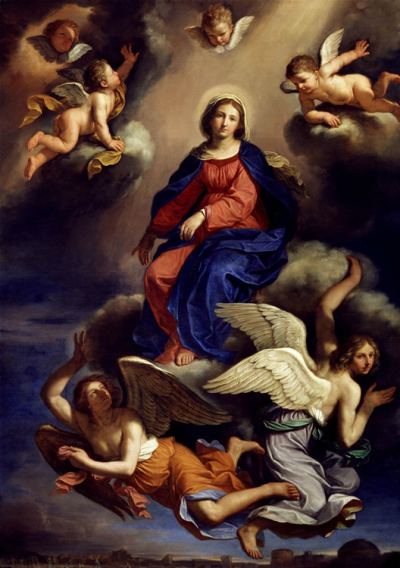 We come today to the heart of the Holy Rule. Chapter VII opens with a kind of clarion call from Saint Luke’s Gospel: “Every one that exalteth himself shall be humbled, and he who humbleth himself shall be exalted” (Luke 14:11). It is impossible to read this opening verse of Chapter VII without hearing, at the same time, the voice of the Mother of God, who bearing her unborn Son beneath her heart, sings:

All of Chapter VII is intelligible only when the opening verse is joined to its closing verse:

Ergo, his omnibus humilitatis gradibus ascensis, monachus mox ad caritatem Dei perveniet illam quae perfecta foris mittit timorem.
Having, therefore, ascended all these degrees of humility, the monk will presently arrive at that charity of God which, being perfect, casteth out fear.

The exaltation of the humble is an assumption into the glory of love, “In this is charity: not as though we had loved God, but because he hath first loved us” (1 John 4:10). Not for nothing do we sing in the Office of the Assumption of the Blessed Virgin Mary:

Maria Virgo assúmpta est ad æthéreum thálamum, in quo Rex regum stelláto sedet sólio.
The Virgin Mary hath been taken into the chamber on high, where the King of kings sitteth on a starry throne.

The Blessed Virgin Mary illuminates all of Chapter VII, from beginning to end. The beginning corresponds to what Our Lady says concerning herself — Behold the handmaid of the Lord; be it done to me according to thy word (Luke 1:38) — and the end corresponds to what she says concerning God — He hath put down the mighty from their seat, and hath exalted the humble (Luke 1:52). All of Benedictine life unfolds between these two utterances of the Mother of God. The life of the monk is the itinerary of the Blessed Virgin Mary from the Annunciation to the Assumption.

I have always found it striking that the very word used by Our Lady in her Magnificat — suscepit — to describe the saving condescension of God is the same word that every monk sings on the day of his profession. The image evoked is that of the father who, by taking a newborn child into his arms, recognises the child as his own, becoming the child’s provider and protector. The Blessed Virgin Mary proclaims, “Suscepit Israël puerum suum, recordatus misericordiæ suæ” (Luke 1:54), and the monk, puer et filius (servant and son), sings, “Suscipe me, Domine, secundum eloquium tuum, et vivam” (Psalm 118:116).

After referring to Psalm 130, the song of spiritual childhood, Saint Benedict introduces the twelve degrees of humility with the image of the ladder beheld by Jacob in dream. The ladder corresponds to the spiritual itinerary of the monk:

Whence, brethren, if we wish to arrive at the highest point of humility, and speedily to reach that heavenly exaltation to which we can only ascend by the humility of this present life, we must by our ever-ascending actions erect such a ladder as that which Jacob beheld in his dream, by which the angels appeared to him descending and ascending.

This ladder, apart from representing “our life in the world, which, if the heart be humbled, is lifted up by the Lord to heaven”, represents the Holy Mother of God. In the ladder which joins heaven and earth the Fathers saw a prefiguring of the Blessed Virgin Mary through whom the Son of God descended (and still descends) into the midst of men in order to offer them salvation by uniting them to Himself. By presenting the life of the monk under the image of Jacob’s ladder, Saint Benedict effectively points to the Blessed Virgin Mary who, in all the mysteries of Her life, from the Annunciation to the Assumption, draws the monk after her, down into the lowliness of her servanthood and upward into the glory of love.