Skip to content
HomeMonasticPope Benedict on Saint Bernard of Clairvaux 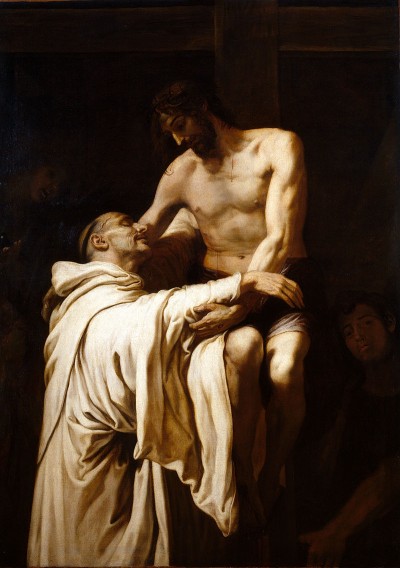 Faith is above all a personal, intimate encounter with Jesus, and to experience his closeness, his friendship, his love; only in this way does one learn to know him ever more, and to love and follow him ever more. May this happen to each one of us.

In this text, Pope Benedict XVI presents another great monastic figure: Saint Bernard, Abbot of Clairvaux, the Last of the Fathers. Pope Benedict XVI’s love for the monastic vocation shines through this and many of his other discourses and writings.

The Last of the Fathers
Dear brothers and sisters, today I would like to speak about St. Bernard of Clairvaux, called “the last father” of the Church, because in the 12th century he renewed once again and rendered present the great theology of the Fathers. We do not know details about the years of his boyhood. We know, nevertheless, that he was born in 1090 in Fontaines, France, in a numerous, moderately comfortable family. As a youth, he spent himself in the study of the so-called liberal arts — especially grammar, rhetoric and dialectics — at the school of the canons of the church of St. Vorles, in Chatillon-sur-Seine, and he slowly matured his decision to enter the religious life.

Cîteaux and Clairvaux
When he was about 20, he entered Citeaux, a new monastic foundation, more flexible than the old and venerable monasteries of the time and, at the same time, more rigorous in the practice of the evangelical counsels. A few years later, in 1115, Bernard was invited by St. Stephen Harding, third abbot of Citeaux, to found the monastery of Clairvaux. Here the young abbot — who was only 25 years old — was able to refine his concept of monastic life, and to be determined to put it into practice. Looking at the discipline of other monasteries, Bernard decidedly reclaimed the need for a sober and measured life, at table as well as in dress and in the monastic buildings, recommending the support and care of the poor. In the meantime, the community of Clairvaux became ever more numerous and multiplied its foundations.

Friend and Writer
In those same years, before 1130, Bernard maintained a vast correspondence with many persons, whether of important or modest social conditions. To the many letters of this period must be added numerous sermons, as well as sentences and treatises. Striking at this time was Bernard’s friendship with William, abbot of St. Thierry, and with William of Champeaux, among the most important figures of the 12th century. From 1130 onward, he began to be concerned with not a few grave questions of the Holy See and of the Church. For this reason, he had to go out of his monastery ever more often, and sometimes outside of France. He also founded some women’s convents, and was protagonist of a lively correspondence with Peter the Venerable, abbot of Cluny, about whom I spoke last Wednesday.

Defender of the Jews
He addressed his controversial writings above all against Abelard, a great thinker who began a new way of making theology, introducing above all the dialectic-philosophical method in the construction of theological thought. Another front against which Bernard fought was the heresy of the Cathars, who held matter and the human body in contempt, consequently scorning the Creator. As well, he felt it his duty to take on the defense of the Jews, condemning the ever more diffuse resurgence of anti-Semitism. For this last aspect of his apostolic action, some 10 years later, Ephraim, rabbi of Bonn, addressed a vibrant tribute to Bernard. In that same period the holy abbot wrote his most famous works, such as the well-known Sermons on the Canticle of Canticles. In the last years of his life — his death occurred in 1153 — Bernard had to limit his journeys, without however interrupting them altogether. He took advantage to review definitively the whole of the letters, sermons and treatises.

A Book for Popes
Worthy of being mentioned is a book that is quite singular, that he finished precisely in this period, in 1145, when one of his pupils, Bernard Pignatelli, was elected Pope, taking the name Eugene III. In this circumstance, Bernard, in the capacity of spiritual father, wrote to this spiritual son of his the text “De Consideratione,” which contains teachings on how to be a good pope. In this book, which remains an appropriate book for popes of all times, Bernard does not only indicate what it is to be a good pope, but also expresses a profound vision of the mystery of the Church and of the mystery of Christ, which is resolved, in the end, in the contemplation of the mystery of the Triune and One God: “He must again continue the search of this God, who is not yet sufficiently sought,” writes the holy abbot “but perhaps He can be sought better and found more easily with prayer than with discussion. We put an end here to the book, but not to the search” (XIV, 32: PL 182, 808), to being on the way to God.

Doctor Mellifluus
I would now like to reflect on two key aspects of Bernard’s rich doctrine: they regard Jesus Christ and Mary Most Holy, his Mother. His solicitude for the intimate and vital participation of the Christian in the love of God in Jesus Christ does not offer new guidelines in the scientific status of theology. But, in a more than decisive way, the abbot of Clairvaux configures the theologian to the contemplative and the mystic. Only Jesus — insists Bernard in face of the complex dialectical reasoning of his time — only Jesus is “honey to the mouth, song to the ear, joy to the heart (mel in ore, in aure melos, in corde iubilum).” From here stems, in fact, the title attributed to him by tradition of Doctor Mellifluus: his praise of Jesus Christ, in fact, “runs like honey.” 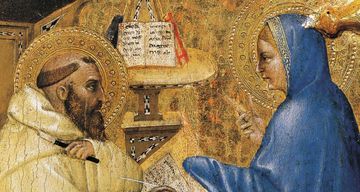 In the extenuating battles between nominalists and realists — two philosophical currents of the age — the abbot of Clairvaux does not tire of repeating that only one name counts, that of Jesus the Nazarene. “Arid is all food of the soul,” he confesses, “if it is not sprinkled with this oil; insipid, if it is not seasoned with this salt. What is written has no flavor for me, if I have not read Jesus.” And he concludes: “When you discuss or speak, nothing has flavor for me, if I have not heard resound the name of Jesus” (Sermones in Cantica Canticorum XV, 6: PL 183,847).

The Friendship of Christ
For Bernard, in fact, true knowledge of God consists in a personal, profound experience of Jesus Christ and of his love. And this, dear brothers and sisters, is true for every Christian: Faith is above all a personal, intimate encounter with Jesus, and to experience his closeness, his friendship, his love; only in this way does one learn to know him ever more, and to love and follow him ever more. May this happen to each one of us.

Mary’s Participation in the Passion of Jesus
In another famous sermon on the Sunday Between the Octave of the Assumption, the holy abbot describes in impassioned terms the intimate participation of Mary in the redeeming sacrifice of the Son. “O holy Mother,” he exclaims, “truly a sword has pierced your soul! … To such a point the violence of pain has pierced your soul, that with reason we can call you more than martyr, because your participation in the Passion of the Son greatly exceeded in intensity the physical sufferings of martyrdom” (14: PL 183, 437-438).

To Jesus Through Mary
Bernard has no doubts: “per Mariam ad Iesum,” through Mary we are led to Jesus. He attests clearly to Mary’s subordination to Jesus, according to the principles of traditional Mariology. But the body of the sermon also documents the privileged place of the Virgin in the economy of salvation, in reference to the very singular participation of the Mother (compassio) in the sacrifice of the Son. It is no accident that, a century and a half after Bernard’s death, Dante Alighieri, in the last canto of the Divine Comedy, puts on the lips of the “Mellifluous Doctor” the sublime prayer to Mary: “Virgin Mary, daughter of your Son,/ humble and higher than a creature,/ fixed end of eternal counsel, …” (Paradiso 33, vv. 1ss.).

The Science of the Saints
These reflections, characteristic of one in love with Jesus and Mary as St. Bernard was, rightly inflame again today not only theologians but all believers. At times an attempt is made to resolve the fundamental questions on God, on man and on the world with the sole force of reason. Instead, St. Bernard, solidly based on the Bible and on the Fathers of the Church, reminds us that without a profound faith in God, nourished by prayer and contemplation, by a profound relationship with the Lord, our reflections on the divine mysteries risk becoming a futile intellectual exercise, and lose their credibility. Theology takes us back to the “science of the saints,” to their intuitions of the mysteries of the living God, to their wisdom, gift of the Holy Spirit, which become the point of reference for theological thought.
Together with Bernard of Clairvaux, we too must recognize that man seeks God better and finds him more easily “with prayer than with discussion.” In the end, the truest figure of the theologian and of every evangelizer is that of the Apostle John, who leaned his head on the heart of the Master.

Think of Mary, Call on Mary
I would like to conclude these reflections on St. Bernard with the invocations to Mary that we read in one of his beautiful homilies. “In danger, in anguish, in uncertainty,” he says, “think of Mary, call on Mary. May she never be far from your lips, from your heart; and thus you will be able to obtain the help of her prayer, never forget the example of her life. If you follow her, you cannot go astray; if you pray to her, you cannot despair; if you think of her, you cannot be mistaken. If she sustains you, you cannot fall; if she protects you, you have nothing to fear; if she guides you, do not tire; if she is propitious to you, you will reach the goal …” (Hom. II super “Missus est,” 17: PL 183, 70-71).