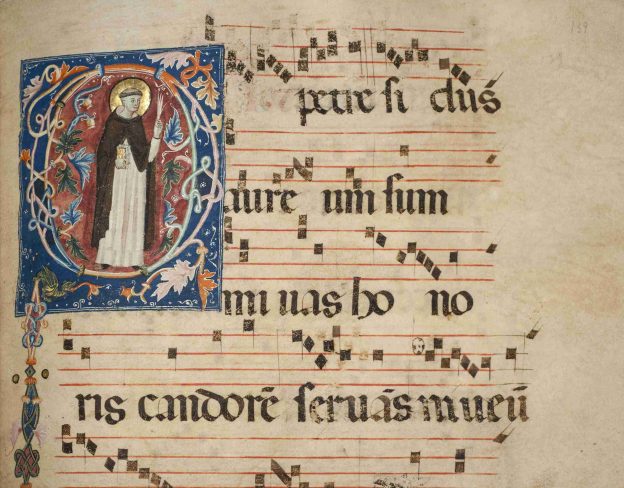 Contemplative Chant
What should the contemplative chant be? This chant is distinguished precisely by the spirit of prayer, or at least by the aspiration which inclines us to it, which desires it, seeks it, and at length obtains it. We are thus shown how much the contemplation of the mysteries of faith is in the normal way of sanctity: this contemplation alone can give us in liturgical prayer the light, peace, and joy of the truth tasted and loved, gaudium de veritate.

The Very Respiration of the Soul
The spirit of prayer, more intimately drawn from mental prayer, is lost as soon as one hurries to finish daily prayer, as if it were not the very respiration of the soul, spiritual contact with God, our Life, It was in the spirit of prayer that the psalms were conceived without it, we cannot understand them or live by them. “As the hart panteth after the fountains of water, so my soul panteth after Thee, O God.” (1)

Psalmody and Secret Prayer
If the psalmody has this spirit, then in place of mechanical haste, which is a superficial life, we find profound life for which we do not need continually to recall liturgical rules, for these rules are merely the expression of its inner inclinations. Then, without excessive slowness the words are well pronounced, undue haste is avoided, and the pauses, serving as a vital rest between aspiration and respiration, are observed. The antiphons are tasted, and the soul is truly nourished with the substance of the liturgical text. Whoever has the duty of reading the lessons, which are often most beautiful, should look them over ahead of time in order not to spoil their meaning. He who reads the lessons well avoids a too evident expression of his personal piety, but the great objective meaning of Scripture explained by the fathers remains intelligible, and here and there he grasps its splendors in the midst of its divine obscurities. No effort is made to save four or five minutes, and he ceases to lose the precious time given by God. He is even led at the end of the chant to prolong prayer by some moments of mental prayer, like the religious in bygone days who, at night after Matins and Lauds, spent some time in profound recollection. Many times in the history of their lives mention is made of these secret prayers, of this heart to heart conversation with God in which they often received the greatest lights, which made them glimpse what they had sought till then during hours and hours of labor. When this spirit of prayer prevails, real life begins, and one understands that mental prayer gives the spirit of the chant; whereas the psalmody furnishes to mental prayer the best possible food, the very word of God, distributed and explained in a suitable manner, according to the cycle of the liturgical year, according to the true time, which coincides with the single instant of immobile eternity.

Ardent Prayer
Such prayer is no longer mechanical, but organic; the soul has returned to vivify the body; prayer is no longer a succession of words; we are able to seize the vital spirit running through them. Without effort, even in the most painful hours of life, we can taste the admirable poetry of the psalms and find in them light, rest, strength, renewal of all energies. Then truly this prayer is a lifting up of the soul toward God, a lifting up that is not uniformly retarded, but rather accelerated. The soul burns therein and is consumed in a holy manner like the candles on the altar. . . .

To Taste and to Love
The chant, which prepares so admirably for Mass and which follows it, is one of the greatest means by which the theologian, as well as others, may rise far above reasoning to contemplation, to the simple gaze on God and to divine union. The theologian who has spent a long time over his books in a positive and speculative study of revelation, in the refutation of numerous errors and the examination of many opinions relating to the great mysteries of the Trinity, the Incarnation, the Eucharist, the life of heaven, needs, after such study, to rise above all this bookish knowledge; he needs profound recollection, truly divine light, which is superior to reasoning and gives him the spirit of the letter which he has studied. Otherwise he grows spiritually anaemic and, because of insufficient contact with the light of life, he cannot give it adequately to others. His work remains too mechanical, not sufficiently organized and living, or it may be that the governing idea of his synthesis has not been drawn from a high enough source; it lacks amplitude, life, radiation, and little by little it loses its interest. The theologian needs often to find the living and splendid expression of the mysteries that he studies in the very words of God, such as the liturgy makes us taste and love: “Taste, and see that the Lord is sweet.”

Living Psalmody
The word of God, which is thus daily recalled to us in prayer, is to its theological commentary what a simple circumference is to the polygon inscribed in it. We must forget the polygon momentarily in order to enjoy a little and in a holy manner the beauty of the circle, which the movement of contemplation follows, as Dionysius used to say. This is found during the chant, if mechanical haste is not substituted for the profound life which ought to spring from the fountain. The body of the chant must be truly vivified by the spirit of prayer.

To Pray Always
There is great happiness in hearing the Divine Office thus chanted in many monasteries of Benedictines, Carthusians, Carmelites, Dominicans, and Franciscans. This prayer attracts good vocations, whereas the other, because it is materialized, drives them away. When we hear the great contemplative prayer in certain cloisters, we feel the current of the true life of the Church; it is its chant, both simple and splendid, which precedes and follows the sublime words of the Spouse: the Eucharistic consecration. We are made to forget all the sorrows of this world, all the more or less false complications and all the tiresome tasks imposed by human conventions. God grant that the chant may ever remain thus keenly alive day and night in our monasteries! It has been noticed that when it ceases at night in those convents where it should go on, the Lord raises up nocturnal adoration to replace it, for living prayer ought not to cease, and prayer during the night, by reason of the profound silence into which everything is plunged and for many other reasons, has special graces of contemplation: Oportet semper orare.

Rest in God
The chant thus understood is the holy repose which souls need after all the fatigues, agitations, and complications of the world. It is rest in God, rest that is full of life, rest which from afar resembles that of God, who possesses His interminable life tota simul, in the single instant which never passes, and which at the same time measures supreme action and supreme rest, quies in bono amato.

The Benefits of the Divine Office
We may define the mutual relations of mental prayer and the Divine Office by saying that from mental prayer the Office receives the habit of recollection and the spirit of prayer. On the other hand, mental prayer finds in liturgical prayer an abundant source of contemplation and an objective rule against individual illusions. The Divine Office cures sentimentality by continually recalling the great truths in the very language of Scripture; it reminds presumptuous souls of the greatness and severity of divine justice, and it also reminds fearful souls of infinite mercy and the value of the passion of Christ. It makes sentimental souls live on the heights of true faith and charity, far above sensibility.

(Père Garrigou–Lagrange, The Three Stages of the Interior Life, Chapter 34)