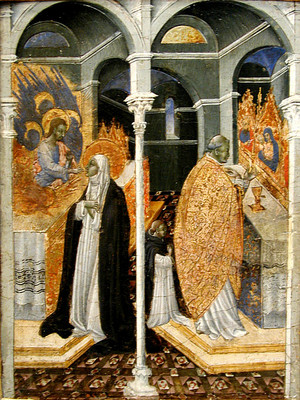 On this feast of Saint Catherine of Siena, here is a particularly poignant passage from The Dialogue. The image is Giovanni da Paola’s Saint Catherine of Siena Receiving Holy Communion from the Hand of Christ. Saint Catherine receives Holy Communion with her arms crossed over her breast, just as Eastern Christians do today. In the classic iconography of the Annunciation, this is the gesture of the Virgin Mary giving her assent to the Archangel Gabriel and receiving the Word in her womb. In the panel on the right a priest stands at the altar offering Holy Mass. Note the little Friar Preacher kneeling on the altar step.

Ministers of the Sun
I have shown you, dearest daughter, a sample of the excellence of good priests (for what I have shown you is only a sample of what that excellence really is), and I have told you of the dignity in which I have placed them, having elected them for My ministers, on account of which dignity and authority I do not wish them to be punished by the hand of seculars on account of any personal defect, for those who punish them offend Me miserably. But I wish seculars to hold them in due reverence, not for their own sakes, as I have said, but for Mine, by reason of the authority which I have given them. Wherefore this reverence should never diminish in the case of priests whose virtue grows weak, any more than in the case of those virtuous ones of whose goodness I have spoken to you; for all alike have been appointed ministers of the Sun–that is of the Body and Blood of My Son, and of the other Sacraments.

Priests in A Condition of Light
This dignity belongs to good and bad alike–all have the Sun to administer, as has been said, and perfect priests are themselves in a condition of light, that is to say, they illuminate and warm their neighbors through their love. And with this heat they cause virtues to spring up and bear fruit in the souls of their subjects. I have appointed them to be in very truth your guardian angels to protect you; to inspire your hearts with good thoughts by their holy prayers, and to teach you My doctrine reflected in the mirror of their life, and to serve you by administering to you the holy Sacraments, thus serving you, watching over you, and inspiring you with good and holy thoughts as does an angel.

They Are My Christs
See, then, that besides the dignity to which I have appointed them, how worthy they are of being loved; when they also possess the adornment of virtue, as did those of whom I spoke to you, which are all bound and obliged to possess, and in what great reverence you should hold them, for they are My beloved children and shine each as a sun in the mystical body of the holy Church by their virtues, for every virtuous man is worthy of love, and these all the more by reason of the ministry which I have placed in their hands. You should love them therefore by reason of the virtue and dignity of the Sacrament, and by reason of that very virtue and dignity you should hate the defects of those who live miserably in sin, but not on that account appoint yourselves their judges, which I forbid, because they are My Christs, and you ought to love and reverence the authority which I have given them.

Badly Ordered Priests
You know well that if a filthy and badly dressed person brought you a great treasure from which you obtained life, you would not hate the bearer, however ragged and filthy he might be, through love of the treasure and of the lord who sent it to you. His state would indeed displease you, and you would be anxious through love of his master that he should be cleansed from his foulness and properly clothed. This, then, is your duty according to the demands of charity, and thus I wish you to act with regard to such badly ordered priests, who themselves filthy and clothed in garments ragged with vice through their separation from My love, bring you great Treasures–that is to say, the Sacraments of the holy Church–from which you obtain the life of grace, receiving Them worthily (in spite of the great defects there may be in them) through love of Me, the Eternal God, who send them to you, and through love of that life of grace which you receive from the great treasure, by which they administer to you the whole of God and the whole of Man, that is to say, the Body and Blood of My Son united to My Divine nature.

Pray for Them and Not Judge Them
Their sins indeed should displease you, and you should hate them, and strive with love and holy prayer to re-clothe them, washing away their foulness with your tears–that is to say, that you should offer them before Me with tears and great desire, that I may re-clothe them in My goodness, with the garment of charity. Know well that I wish to do them grace, if only they will dispose themselves to receive it, and you to pray for it; for it is not according to My will that they should administer to you the Sun being themselves in darkness, not that they should be stripped of the garment of virtue, foully living in dishonor; on the contrary I have given them to you, and appointed them to be earthly angels and suns, as I have said. It not being My will that they should be in this state, you should pray for them, and not judge them, leaving their judgment to Me.