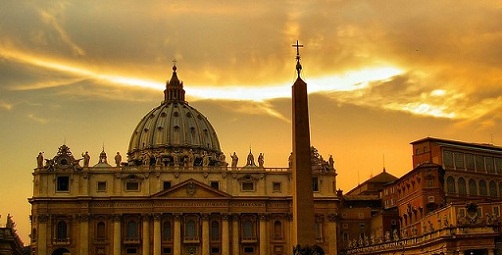 According to the Fathers, ontologically, the Church-mystery, the Church that is one and unique, precedes creation, and gives birth to the particular Churches as her daughters. She expresses herself in them; she is the mother and not the product of the particular Churches. Furthermore, the Church is manifested, temporally, on the day of Pentecost in the community of the one hundred and twenty gathered around Mary and the twelve Apostles, the representatives of the one unique Church and the founders-to-be of the local Churches, who have a mission directed to the world: from the first the Church speaks all languages.

From the Church, which in its origins and its first manifestation is universal, have arisen the different local Churches, as particular expressions of the one unique Church of Jesus Christ. Arising within and out of the universal Church, they have their ecclesiality in it and from it. Hence the formula of the Second Vatican Council: The Church in and formed out of the Churches (Ecclesia in et ex Ecclesiis), is inseparable from this other formula: The Churches in and formed out of the Church (Ecclesia in et ex Ecclesiis). Clearly the relationship between the universal Church and the particular Churches is a mystery, and cannot be compared to that which exists between the whole and the parts in a purely human group or society.