Skip to content
HomePope Benedict XVIChrist Made Me His Own 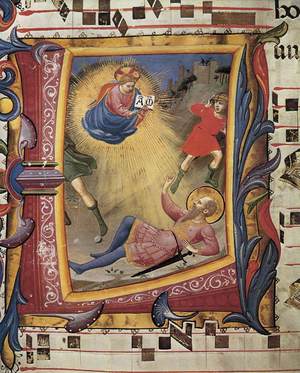 In the fall of 2006 the Holy Father gave five General Audiences on Saint Paul the Apostle. These five teachings are a marvelous preparation for the forthcoming Year of Saint Paul: there is one for each of the five months between now and June 29, 2008.
“It was precisely on the road to Damascus at the beginning of the 30s A.D. that, according to his words, “Christ made me his own” (Phil 3: 12). While Luke recounts the fact with abundant detail – like how the light of the Risen One touched him and fundamentally changed his whole life -, in his Letters he goes directly to the essential and speaks not only of a vision (cf. I Cor 9: 1), but of an illumination (cf. II Cor 4: 6), and above all of a revelation and of a vocation in the encounter with the Risen One (cf. Gal 1: 15-16).
In fact, he will explicitly define himself as “apostle by vocation” (cf. Rom 1: 1; I Cor 1: 1) or “apostle by the will of God” (II Cor 1: 1; Eph 1: 1; Col 1: 1), as if to emphasize that his conversion was not the result of a development of thought or reflection, but the fruit of divine intervention, an unforeseeable, divine grace.
Henceforth, all that had constituted for him a value paradoxically became, according to his words, a loss and refuse (cf. Phil 3: 7-10). And from that moment all his energy was placed at the exclusive service of Jesus Christ and his Gospel. His existence would become that of an Apostle who wants to “become all things to all men” (I Cor 9: 22) without reserve.
From here we draw a very important lesson: what counts is to place Jesus Christ at the centre of our lives, so that our identity is marked essentially by the encounter, by communion with Christ and with his Word. In his light every other value is recovered and purified from possible dross.”
Pope Benedict XVI
General Audience, 25 October 2006