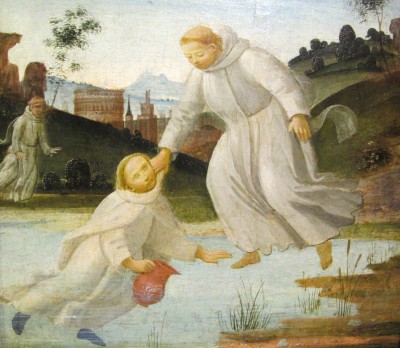 Disclaimer: The series of letters entitled “Correspondence on the Monastic Vocation”, while based on the real questions of a number of men in various places and states of life, is entirely fictitious. Any resemblance to actual persons, institutions, or places is purely coincidental.

I was one of the lads present at a talk you gave to young Catholics in Dublin last year. You spoke about the liturgy in a way that was completely new to me. I never knew, for example, what you told us about the teaching of Saint Pius X over a hundred years ago. I really thought that all this talk about the liturgy was a modernist innovation of Vatican II. A number of young “trads” would think as I did. Then I went home and looked up your reference to Saint Pius X. I can’t stop thinking about it. It shocked me. This is the passage that I copied out:

This is all news to me. I’ve been attending conferences and discussions sponsored by the PCAL (Per Crucem ad Lucem Movement) since beginning university. The PCAL people are articulate and orthodox, even if a wee bit boring. One cannot fault their doctrine. Their doctrine is like their dress: always impeccable. It is their piety that never really suited me. I tried it, but it was like doing the Chartres pilgrimage in an ill–fitting pair of shoes. Still, I didn’t know why it didn’t feel right. Everything changed the day I read the words of Saint Pius X. Why are they not better known?

It would appear, then, that Saint Pius X and PCAL have the same goal in view. Stated rather baldly it is this: to make the world Catholic. The divergence comes in the means adopted to attain the goal. PCAL emphasises personal prayer, asceticism, and a cleverly understated infiltration of secular society. (Again, very S.J. Right?) All good, but in attending PCAL conferences I never once heard Saint Pius X’s method expounded: “We deem it necessary to provide before anything else for the sanctity and dignity of the temple . . . .” If I understand Saint Pius X correctly, he is saying that the restoration of all things to Christ (his motto) begins with what goes on inside our churches, i.e. “the sanctity and dignity of the temple”.

I try to practice my Catholic faith. I believe that evangelisation is about making the world Catholic. I believe that evangelisation is urgent and that the Cross of Christ must be carried into the world and raised aloft in full view. I am also thinking about becoming a monk. People scoff at Father Zed’s catchy slogan: Save the liturgy — Save the world. I loathe slogans, but I really think Father Zed gets it right. Save the liturgy — Save the world is essentially what Saint Pius X was saying back in 1903. I suppose this is why, at the end of the day, I want to devote my life to praising God in the heart of the Church. This is why I want to be a Benedictine.

Quite a letter, young man! You must have burned the midnight oil writing it. You make a number of astute observations. Let me begin by saying that the Church Catholic is big. There is room in Mother Church for a vast variety of accents, colours, emphases, textures, and tastes. With this glorious diversity, however, there is a substantial unity that holds the Church together as the one Body of Christ. The sacred liturgy of the Church, culminating in the Most Holy Eucharist, is the ground of that unity and its highest expression. This is what Pope Saint Pius X was addressing in the prophetic Motu Proprio that you quote in your letter, and upon which you have reflected thoroughly.

I am somewhat familiar with PCAL. You were spot on in saying that the founder of PCAL took a page out of the Jesuits’ copybook and rewrote it for his followers. He wanted to do for the 20th century what the great Jesuits of the Counter–Reformation did in their time. The approach was the same: essentially pragmatic. Both the Jesuits and PCAL are focused, as you said, on “infiltrating” the world in order to sow there the seeds of the Gospel. Most of their number would, however, disagree with (or at least not want to emphasise) Saint Pius X’s categorical affirmation that the foremost and indispensable font of the true Christian spirit is active participation in the most holy mysteries and in the public and solemn prayer of the Church. By means of meditations, the daily examen, spiritual reading, and asceticism, the typical SJ or PCAL arms himself for action in the world. He would tend, I think, to see even Confession and Holy Communion as the powerful means by which a man fits himself to do battle under the banner of Christ the King.

Do not dismiss Christian military imagery as something that came into vogue with Saint Ignatius and his sons during the Catholic Reformation. It has a long history going back to Saint Paul the Apostle:

You must wear all the weapons in God’s armoury, if you would find strength to resist the cunning of the devil. It is not against flesh and blood that we enter the lists; we have to do with princedoms and powers, with those who have mastery of the world in these dark days, with malign influences in an order higher than ours. Take up all God’s armour, then; so you will be able to stand your ground when the evil time comes, and be found still on your feet, when all the task is over. Stand fast, your loins girt with truth, the breastplate of justice fitted on, and your feet shod in readiness to publish the gospel of peace. With all this, take up the shield of faith, with which you will be able to quench all the fire-tipped arrows of your wicked enemy; make the helmet of salvation your own, and the sword of the spirit, God’s word. (Ephesians 6:11–17)

Saint Benedict himself sees his monks as soldiers who wage battle for Christ the King. In the Prologue of the Holy Rule, he writes:

To thee, therefore, my words are now addressed, whoever thou art that, renouncing thine own will, dost take up the strong and bright weapons of obedience, in order to fight for the Lord Christ, our true king.

Sounds very Jesuit, doesn’t it? Now you know, Jarlath where St Ignatius got his inspiration! You are correct in perceiving two approaches to prayer, to holiness, and to the liturgy. In the first — the one that the Rule of Saint Benedict, and Saint Gertrude the Great, and Abbot Guéranger, and Blessed Columba Marmion, and Saint Pius X, and Vatican II’s Sacrosanctum Concilium, and Pope Benedict XVI, among others — would, represent — the foremost and indispensable form and expression of prayer is liturgical, therefore objective; holiness is understood as praise of the glory of God; and the liturgy is “a sacred action surpassing all others; no other action of the Church can equal its efficacy by the same title and to the same degree” (Sacrosanctum Concilium, article 7).

In the second approach, the pragmatic one that your friends in PCAL would favour, prayer is chiefly subjective, personal, and private; holiness is ordered to fruitful apostolic action (even when that apostolic action is, like the leaven in the dough, “undercover”); and one’s liturgical life is confined to fulfilling one’s obligation to participate in Holy Mass, receive the sacraments, and do whatever else is required by Church law.

I have always perceived a kind of disconnect between the latter school (typified by the S.J. and your friends in PCAL) and the clear teaching of Saint Pius X in the text you quoted, the Motu Proprio, Tra le sollecitudini. It seems to have gone over the heads of not a few good people. In spite of the fact that you young “trads” bristle whenever a document of Vatican II is mentioned, I think that the magnificent opening of Sacrosanctum Concilium clearly comes down on the side of an unambiguously traditional liturgical piety and reaffirms what Saint Pius X taught:

The liturgy, “through which the work of our redemption is accomplished,” most of all in the divine sacrifice of the Eucharist, is the outstanding means whereby the faithful may express in their lives, and manifest to others, the mystery of Christ and the real nature of the true Church. It is of the essence of the Church that she be both human and divine, visible and yet invisibly equipped, eager to act and yet intent on contemplation, present in this world and yet not at home in it; and she is all these things in such wise that in her the human is directed and subordinated to the divine, the visible likewise to the invisible, action to contemplation, and this present world to that city yet to come, which we seek. (Sacrosanctum Concilium, article 2)

I’ve done my best, Jarlath, to grasp the nettle, and address your concerns. Stay calm, and read your Missal and Breviary! We can discuss another time your desire to be a Benedictine.

With my blessing,
Father Prior