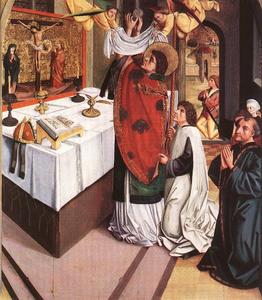 I do love this painting of Saint Martin’s Mass. It is the work of an unknown Hungarian master and dates from 1490. Saint Martin’s acolyte, clothed in a flowing sleeveless surplice, holds a lighted taper in one hand and lifts the bishop’s chasuble with the other. Saint Martin is totally absorbed in his priestly service. Notice his pontifical vestments: the alb, green dalmatic, and red chasuble bearing the image of the Crucified. His amice is adorned with a green apparel and the maniple is clearly visible on his left arm.
Angels assist at the elevation of the Sacred Host, spreading a kind of “sacring cloth” beneath it: an exquisite expression of reverence that serves, at the same time, to cover Saint Martin’s arms. His sleeves have fallen almost to his elbows. Looking closely at the Host, one sees that it too bears the imprint of the Crucified. Both Saint Martin and his acolyte are gazing intently at the Body of Christ.
The altar is covered with fair linens and with a corporal. Two candles are burning. The missal and mitre rest on the left side of the altar. The precious chalice is covered with a white linen pall; behind it, at the foot of the crucifix, there is a covered ciborium. The altarpiece depicts the Crucified Jesus with the Blessed Virgin Mary and Saint John. In all, there are three representations of the Crucified: on the back of the chasuble, on the Host, and on the altarpiece. Clearly, this is the sacramental actualization of the Sacrifice of the Cross.
The kneeling man dressed in black appears to be a cleric; he folds his hands in an attitude of devotion and lifts his eyes to the Body of Christ. Just behind him one barely sees the head of another worshiper. A lady coiffed in white looks on from a distance; behind here there is another woman. The door of the church is open and, just outside, is a young layman come to see the elevation. Perhaps he was drawn there by the sound of the church bells ringing the Sanctus. He is kneeling in adoration and his hands are folded.
The whole painting breathes a climate of adoration and wonder. Every person in it is fully, consciously, and actually engaged in the Mysterium Fidei. I think of it as an image of authentic liturgical renewal.