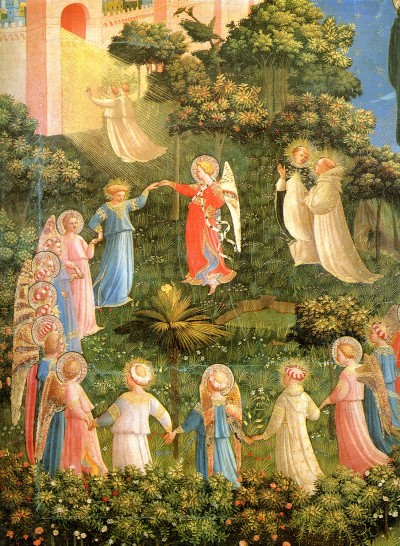 Sunday in the IV Week of August
From the Book of Moral Reflections by St Gregory the Great, Pope & Doctor of the Church

Some there are who have no regard to their own true life; greedy are they of the things which pass away; but as to the things which are eternal, either they understand them not, or, understanding them, they hold them to be but of little moment; so that they seem insensate, and never know how to take wise advice; and, in forgetfulness of the heavenly possessions which they have lost, they deem themselves (alas, poor wretches!) happy in their possession of the things of the world.  They make no endeavour to lift up their eyes to the light of truth for which they were created.  No keen desire ever makes them to cast a longing look toward their eternal fatherland.  Rather, forsaking the true end for which they were destined, they fall in love with the exile which they are enduring, rather than with their home, and make merry in their blindness which they are suffering, as though it were glorious daylight.

But, on the other hand, the understandings of the elect — since they perceive that all things transitory are as nothing — do go in search after those things for which they were created.  And, since nothing outside God doth fully satisfy them, their hearts, even though wearied by the strain of their search, do find rest in the hope for, and in the contemplation of, their Creator.  So are they fain to have their citizenship in heaven.  And each one of them, although still placed in the world as concerning his body, does yet in heart and mind thither ascend, and there above does continually dwell.  All such do bemoan the hardships of the exile which they are enduring, and do rouse themselves by the constant pricking of their love, to look at their fatherland on high.  When therefore such a one sees that he has, through sin, lost an eternal inheritance, he grieves; and then he seeks (and so he finds) this healthy counsel, to wit, to reckon but lightly the transitory things through which he is passing.  And the more he grows in understanding of the wise course that he has chosen,  —that is, to abandon perishing things — the more his longing increases to attain to the things which endure.

It is also worthy of notice that they who are given to rash and hasty action are, by the same token, not given to sorrow of heart, but rather are insensate to spiritual things.  For they that live without thought, and leave themselves recklessly to the guidance of events, thereby escape the sorrowful weariness which comes from the effort of thinking.  He that orders his life by prudent consideration is ever looking carefully round about him before the beginning of any new course.  Thus, like a man that, before advancing on an uncertain way, tries the ground with his foot, so he takes thought beforehand, lest he come unexpectedly upon some evil thing.  On this wise he is ever on the watch; lest panic overtake him when he must do something which requires coolness; lest rashness drive him into things which were better put off to another season; lest concupiscence should overcome him in the warfare against his lusts; or lest even good things should undo him by an onslaught of vain glory.