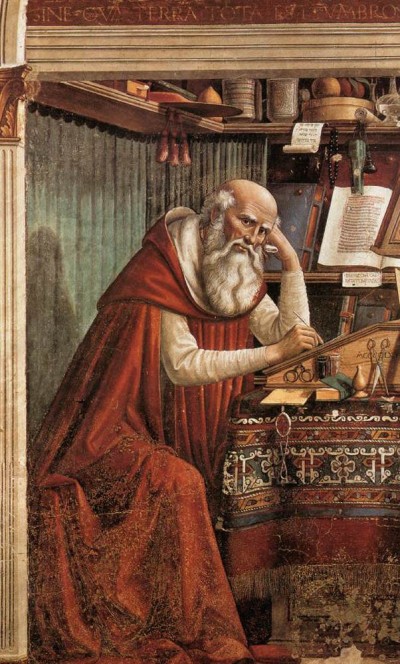 Friday in the II Week of August

From the Commentary on Ecclesiastes by St Jerome, Priest & Doctor of the Church

“Any man to whom God gives riches and property, and grants power to partake of them, so that he receives his lot and finds joy in the fruits of his toil, has a gift from God.  For he will hardly dwell on the shortness of his life, because God lets him busy himself with the joy of his heart.”  In comparison with the man who feeds himself on a diet of dark preoccupations and with notable tedium for life brings with him wherever he goes things which will lead to ruin, Ecclesiastes affirms that that man is better who uses the things before him.  For the use of the latter will impart a little delight; whereas there is only great anguish in the concern for the former.  And he lists the reasons for which it is a gift of God to be able to enjoy riches.  “For he will hardly dwell on the shortness of his life.”

God will certainly distract him in the joy of his heart: he will not be in sadness, he will not be tormented by apprehension, distracted as he is by present joy and pleasure.  But according to the Apostle it is better to understand the spiritual food and drink given by God to discern the good in every work of one’s own, because it is by means of a very great labour and application that we can contemplate the true goods.  And our reward is to be able to rejoice in our study and our work.  That which can also be good is not completely good, however, until Christ has been manifested in our life.  “All man’s toil is for his mouth, yet his desire is not fulfilled.  For what advantage has a wise man over the fool, or what advantage has the poor man in knowing how to conduct himself in life?”  Everything that men produce by working in this world is consumed by the mouth and, after being chewed by the teeth, is consigned to the stomach to be digested.  And after giving delight to the throat for a while, it appears to give greater pleasure to the extent that it is held in the jaws.

And after all this, the soul of the person who eats is not satisfied: either because he desires once again what he has eaten, and without food neither the wise man nor the fool can live, and the poor man does not seek anything else but how he can feed his little stomach so that he may not die of starvation; or because the soul receives nothing useful from the restoration of the body, since food is common both to the wise man and to the fool, and the poor man goes wherever he sees resources.  It is better instead to take this as the thought of Ecclesiastes, namely, that the person who is learned in the heavenly Scriptures does every work for his mouth, yet his desire is not fulfilled insofar as he continuously seeks to learn.  And in this the wise man has an advantage over the fool: because when he discovers that he is poor — that poor man who is declared blest by the Gospel — he hastens to acquire those goods that form part of life and to tread the straight and narrow path that leads to life, and he is poor in evil deeds, and knows where Christ, who is life, resides.