Skip to content
HomeAdvent LiturgyKeep that day before your eyes 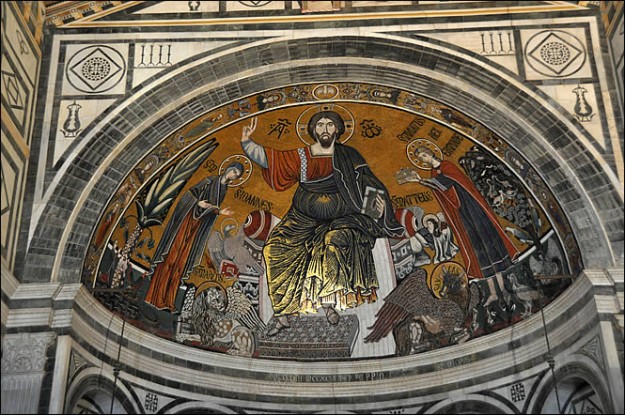 At Matins this morning:

From the Catechetical Lectures of St Cyril of Jerusalem, Bishop & Doctor of the Church

We preach not one advent only of Christ, but a second also, far more glorious than the former.  For the former gave a view of His patience; but the latter brings with it the crown of a divine kingdom.  For all things, for the most part, are twofold in our Lord Jesus Christ: a twofold generation; one, of God, before the ages; and one, of a Virgin, at the close of the ages: his descents twofold; one, the unobserved, like rain on a fleece; and a second his open coming, which is to be.  In his former advent, he was wrapped in swaddling clothes in the manger; in his second, he covers himself with light as with a garment.  In his first coming, he endured the Cross, despising the shame; in his second, he comes attended by a host of Angels, receiving glory.  We rest not then upon his first advent only, but look also for his second.  And as at his first coming we said, “Blessed is he that cometh in the Name of the Lord”, so will we repeat the same at His second coming; that when with Angels we meet our Master, we may worship him and say, “Blessed is he that cometh in the Name of the Lord”.

The Saviour comes, not to be judged again, but to judge them who judged him; He who before held his peace when judged, shall remind the transgressors who did those daring deeds at the Cross, and shall say, “These things hast thou done, and I kept silence”.  Then, he came because of a divine dispensation, teaching men with persuasion; but this time they will of necessity have Him for their King, even though they wish it not.  Our Lord Jesus Christ, then, comes from heaven; and he comes with glory at the end of this world, in the last day.  For of this world there is to be an end, and this created world is to be re-made anew.  For since corruption, and theft, and adultery, and every sort of sins have been poured forth over the earth, and blood has been mingled with blood in the world, therefore, that this wondrous dwelling-place may not remain filled with iniquity, this world passes away, that the fairer world may be made manifest.  And would you receive the proof of this out of the words of Scripture?  Listen to Isaias, saying, “And the heaven shall be rolled together as a scroll; and all the stars shall fall, as leaves from a vine, and as leaves fall from a fig-tree”.  The Gospel also says, “The sun shall be darkened, and the moon shall not give her light, and the stars shall fall from heaven”.

Our Lord Jesus Christ, then, comes from heaven; and he comes with glory at the end of this world, in the last day.  For of this world there is to be an end, and this created world is to be re-made anew.  For since corruption, and theft, and adultery, and every sort of sins have been poured forth over the earth, and blood has been mingled with blood in the world, therefore, that this wondrous dwelling-place may not remain filled with iniquity, this world passeth away, that the fairer world may be made manifest. Let us not sorrow, as if we alone died; the stars also shall die; but perhaps rise again.  And the Lord rolls up the heavens, not that he may destroy them, but that He may raise them up again more beautiful.

The Continuation of the Holy Gospel according to Luke

At that time: Jesus spoke these words to his disciples: “The sun and the moon and the stars will give portents, and on earth the nations will be in distress, bewildered by the roaring of the sea and of its waves.”  And so on, and that which follows.

From a Homily by St Gregory the Great, Pope and Doctor

Our Lord and Saviour wishes to find us ready at his second coming.  Therefore he tells us what will be the evils of the world as it grows old, that he may wean our hearts from worldly affections.  Here we read what great convulsions will go before the end, that, if we will not fear God in our prosperity, we may at least be scourged into fearing His judgment when it is at hand.  Now some of these things are come to pass already, and we fear the others are not far off.  We tell you these things, dearest brethren, in order that your souls may awaken to an eagerness for security, and lest you become torpid in a security that is false, and become lax through ignorance of Christian truth, but rather that you may become solicitous, and that anxiety may strengthen you in doing good, reflecting on this which the voice of the Redeemer added: “Men withering away for fear and expectation of what shall come upon the whole world.  For the powers of the heavens shall be moved.”

Since these words were directed at the reprobate, he then turns to speak words of comfort to the elect. For he says: “When these things come to pass, look up, and lift up your heads, because your redemption is at hand.”  It is as if the Truth openly warns his Elect by saying: when the evils of this world mount up, when dread of the judgment is shown even by the trembling powers, lift up your heads, that is, be joyful in your hearts, because the world, of which you are not friends, is drawing to its end; the redemption you have been seeking is coming close.  In Scripture the head is often used for the soul, because as the members are ruled by the head, so thoughts are governed by the soul.  To lift up your heads therefore means to raise the heart to the joys of the heavenly fatherland.

Beloved brethren, keep that day before your eyes, and then whatsoever may seem burdensome will become light in comparison. Behold, as we have said, he moves the tempest, and the earth cannot endure it.  What will it do when he moves the heavens?  What can we say of the terrors we now see, except that they are but heralds of the wrath to come?  And let us keep in mind that these present afflictions are as far below the last tribulations, as is the person of the herald below the majesty of the judge he precedes.  Reflect with all your mind upon this day, my dearest brethren.  Remedy what is now defective in your present life.  Amend your ways.  Conquer evil temptations by standing firm against them. Repent with tears of the sins you have committed.  For the more you make ready against the severity of his justice by serving Him in fear, the more serenely shall you behold the Coming of that Eternal Judge, Who with the Father, and the Holy Spirit, liveth and reigneth, world without end.  Amen.