Skip to content
HomeChristmastideAnna of the Face of God 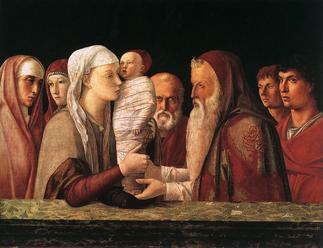 December 30
Sixth Day of the Octave of Christmas
1 John 2:12-17
Luke 2:36-40
Holy Anna
The sacred liturgy treats the holy prophetess Anna, daughter of Phanuel, with a particular sympathy. It is worthy of note that the Lectionary separates the account of her meeting with the Holy Family from that of Simeon, by whom she is often overshadowed. Holy Anna, in her own right, is deserving of more than just a passing consideration. December 30th is her day.
Miriam
Saint Luke introduces the prophetess Anna as the worthy representative of all the prophetesses of the Old Testament. First among these is Myriam, the sister of Moses and Aaron. After the crossing of the Red Sea and the spectacular defeat of the Egyptians by the mighty hand of God, Myriam, “the prophetess, the sister of Aaron, took a timbrel in her hand; and all the women went out after her with timbrels and dancing. And Miriam sang to them: ‘Sing to the Lord, for He has triumphed gloriously; the horse and his rider He has thrown into the sea’” (Ex 15:20-21). Miriam’s ecstatic singing and dancing roused the Israelites to the heights of an impassioned devotion; thus did she bear witness to the immanence of the Spirit of God.
Deborah
In the Book of Judges we encounter Deborah, prophetess, judge, and “mother in Israel” (Judg 5:7). “She used to sit under the palm of Deborah between Ramah and Bethel, in the hill country of Ephraim, and the people of Israel came to her for judgment” (Judg 4:4-5). In many ways, Deborah, the heroine of Israel, bears a resemblance to Joan of Arc. When Deborah directs Barak to go to war against Sisera, the general of Jabin’s army, Barak replies, “If you go with me, I will go, but if you will not go with me, I will not go” (Judg 4:8). Sisera is put to death at the hands of Jael, the wife of Heber the Kenite. Deborah, learning of the demise of the enemy, intones, together with Barak, a rather blood-curdling hymn of victory.

Hulda
In the Second Book of Kings we see a delegation sent by King Josias to the prophetess Hulda (2 K 22-23). Hulda is compelled to speak a hard truth to the royal emissaries. In spite of Josiah’s heartfelt repentance, the people of Judah will be punished for having forsaken the God of Israel and “burned incense to other gods” (2 K 22:17). Hulda is a worthy prophetess of God, speaking the unpopular truth, refusing the political compromise.
The Face of the Infant Christ
Anna then, steps out of the shadows of the Temple into the light of Christ, on behalf of all these, valiant women in Israel, Spirit-bearing mothers, dispensers of wisdom and of divine counsel. Anna is called “the daughter of Phanuel” (Lk 22:36); Phanuel means “Face of God.” It is the very designation given by Jacob to the place of his mysterious struggle with God in the night. “Jacob called the place Peniel, saying, ‘For I have seen God face to face, and yet my life is preserved” (Gen 32:30). The daughter of Phanuel is destined by God to gaze upon His face, not the terrible face of the Divine Holiness concealed even from Moses (Ex 33:20), but the innocent face of the God-Child, “the redemption of Jerusalem” (Lk 2:38). Anna, having gazed into the eyes of the Infant Christ, can say, “I have seen God face to face” (Gen 32:30).
Consecrated Widowhood
Saint Luke tells us that Anna was widowed at a young age, “having lived with her husband seven years from her virginity” (Lk 2:36). She remained unmarried and, at the time of her encounter with the infant Christ, was in her eighty-fourth year (Lk 2:37). Eighty-four is twelve times seven; the convergence of two perfect numbers evokes a fullness of age, maturity, and wisdom. Was this life long celibacy something freely chosen, a gift of self inspired by the Holy Spirit? Discoveries at Qumran have shown that the vocation of the consecrated celibate was, in fact, recognized among certain Jews at the time of Christ. Anna is, in any case, representative of the important role played by widows in Israel, and then in the life of the early Church.
Anna reminds us of Judith who, as a young widow, “set up a tent for herself on the roof of her house and girded sackcloth about her loins and wore the garments of her widowhood. . . . She fasted all the days of her widowhood . . . and feared God with great devotion” (Jud 8:4, 6, 8). Again, Anna illustrates Saint Paul’s description of the special vocation of the widow to ceaseless prayer. “She who is a real widow,” he writes to Timothy, “and is left all alone, has set her hope on God and continues in supplications and prayers night and day” (1 Tim 5:5).
Praying By Day and By Night
The gospel records that Anna “did not depart from the Temple, worshiping with fasting and prayer night and day” (Lk 2:37). As a Jewish woman, Anna could not participate actively in the Temple liturgy; rather, from behind the lattice that concealed devout women at prayer, she would have united her heart and soul to the full-throated psalmody, the prayers, and the pungent offering of incense and sacrifices. Anna perseveres in prayer, not only by day, but even in the hours of the night.
The Protoptype of the Moniale
It is always moving to discover in Saint Luke’s portrait of Anna the prototype of the contemplative nun, hidden in the heart of the Church. The prophetess illustrates all of the essential elements of the contemplative life. Enclosure: she does not “depart from the Temple” (Lk 2:37). Liturgy: she participates in the ritual worship celebrated in the Temple. Mortification: she fasts (Lk 2:37). Ceaseless prayer: she prays night and day (Lk 2:37).
Doxology
Anna “comes up at that very hour” (Lk 2:38). Her meeting with the infant Christ, like that of Simeon, is no chance encounter. It is the work of the Holy Spirit in fulfillment of God’s mysterious designs. “She gave thanks to God” (Lk 2:38). For Saint Luke, every encounter with Christ bears a doxological seal. The encounter with Christ causes praise to rise from the heart, and come to flower on the lips.. In words certainly known to Anna, the psalmist prays, “My mouth is filled with thy praise, and with thy glory all the day. Do not cast me off in the time of old age . . . and my tongue will talk of thy righteous help all the day long” (Ps 71:7-9, 24). Indeed, Saint Luke adds that “she spoke of Him to all who were looking for the redemption of Jerusalem” (Lk 2:38).
Fruit in Old Age
We who, by Baptism, have been “planted in the house of the Lord, to flourish in the courts of our God” (Ps 92:13) are called by God to “bring forth fruit in old age” (Ps 92:14). As branches abiding in Christ, the true vine (Jn 15:5), those who live from Eucharist to Eucharist are “ever full of sap and green” (Ps 92:14). For us, as for Anna, the Temple is the place of encounter with the living God, but for us that Temple is the glorious and indestructible Body of Christ, and the abode of the Spirit. Blessed are you, Anna of the Face of God! And blessed are we who, even today, at this very hour, behold “the light of the knowledge of the glory of God in the face of Jesus, His Christ (2 Cor 4:6)!