Skip to content
HomeBlessed Virgin MaryAnd she entered into the house 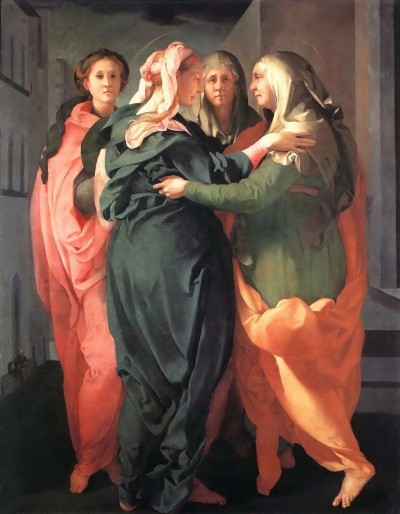 Let that brother who is found guilty of a more grievous offence be excluded both  from the table and from the Oratory, and let none of the brethren consort with him or speak to him. Let him be alone at the work enjoined him, and continue in penance and sorrow, remembering that dreadful sentence of the Apostle, “That such a one is delivered over to Satan for the destruction of the flesh, that his spirit may be saved in the day of the Lord.” Let him take his portion of food alone, in the measure and at the time that the Abbot shall think best for him. Let none of those who pass by bless him, nor the food that is given him.

This morning in Chapter we read Chapter XXV of the Holy Rule, Of Graver Faults, one of eight chapters (XXIII–XXX) that are sometimes called Saint Benedict’s “Penal Code”. While these chapters do, in fact, treat of faults and of the chastisement of offenders, Saint Benedict’s perspective is medicinal and therapeutic (in the best sense of this word, from the Greek verb that means to cure or to treat medically); Saint Benedict would have the abbot act always as a physician of souls, who seeks not so much to punish as to restore to spiritual health.

Certain vices are contagious, and this in a very subtle way. An offending brother can, almost imperceptibly, bring down the moral tone of the whole community. (An edifying brother, on the other hand, builds up the community. Bonum est diffusivum sui: What is good spreads itself.) When a brother’s behaviour is such that he is infecting the community with his own sin, the abbot is bound to sequester him until he recovers his spiritual health. What the Rule calls excommunication is, in effect, a kind of quarantine, that allows the sin–sick brother to recover his health of soul and, at the same time, protects the community from whatever infectious spiritual malady may have brought him low.

Given that today is the feast of the Visitation of the Blessed Virgin Mary, I was led to say something about the Marian effect in monasteries. When Our Lady visits a community (or a family) she brings with her the gifts of spiritual health and joy. The Mother of God is invoked in the Litanies of Loreto as the Salus Infirmorum (Health of the Sick) and the Causa Nostrae Laetitiae, the Cause of Our Joy. Our Lady visits us not only when she is invited to do so, but also when she sees that we are in need of her presence and her ministrations. We have only to open to her the door of our hearts and she enters in, even as she entered the house of Zachary.

And she entered into the house of Zachary, and saluted Elizabeth. And it came to pass, that when Elizabeth heard the salutation of Mary, the infant leaped in her womb. And Elizabeth was filled with the Holy Ghost. (Luke 1:40–41)

We open the door of hearts to the little secret visitations of the Mother of God by praying to her ceaselessly. I encourage the brothers to say endless streams of Hail Marys throughout the day, gratuitously and without calculation. There is much coming and going in our monastery: up and down staircases, through hallways, into the garden, out to the woods, and back and forth to choir. There is a marvelous grace attached to sowing Hail Marys everywhere. Hail Marys sown in this way will, in due time, cause the fruits of spiritual health and joy to spring up and flourish.

I am reminded today of the advice that Mother Yvonne–Aimée gave in July 1941 to her dearest priest friend, the Abbé Paul Labutte:

[The Blessed Virgin] waits for you to love her; a rosary, said well, without rushing. Ask for the virtues that she loves the most: charity, purity, truth, fervour, docility, abandonment. Aves said (while going about) to greet her. O my Sovereign, O my Mother . . . O Mary . . . conceived without sin. She is touched when one recalls her privileges.